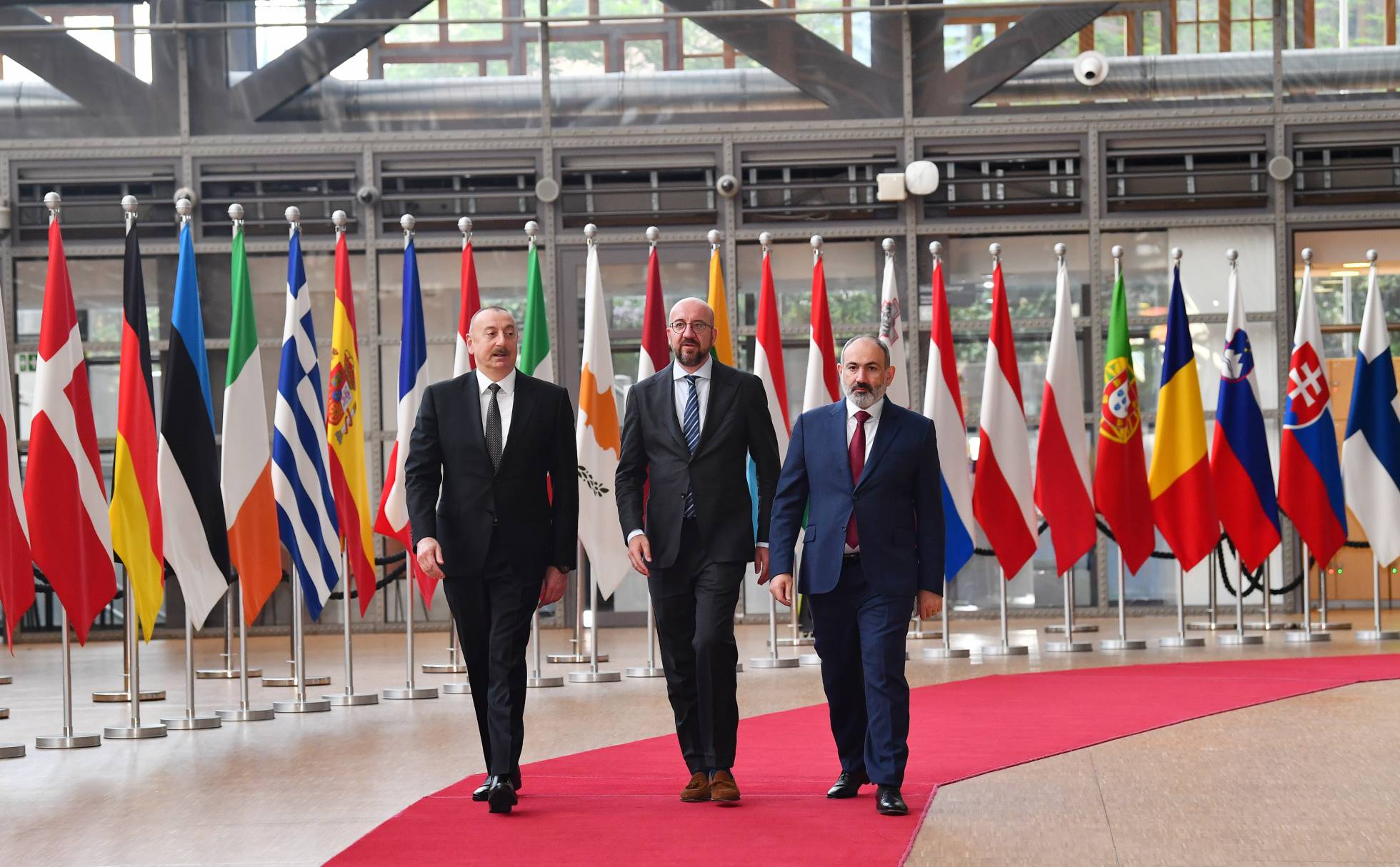 The disputed territory of Karabakh, an area of 4,400 square kilometers in the South Caucasus has been under the control of its ethnic Armenian population as a self-declared state since a war fought in the early 1990s, which ended with a 1994 ceasefire and Armenian military victory. In the aftermath of the first war, a new, internationally unrecognized, de facto Nagorno-Karabakh Republic was established. Seven adjacent regions were occupied by the Armenian forces. As a result of that war, “more than a million people had been forced from their homes: Azerbaijanis fled Armenia, Nagorno-Karabakh, and the adjacent territories, while Armenians left homes in Azerbaijan,” according to the International Crisis Group, an independent organization that works to prevent wars and shape policies.

In his remarks on May 23, Michel said the three leaders focused on “the situation in the South Caucasus and the development of EU relations with both countries as well as the broader region.”

The three leaders previously met in December 2021, and in April 2022. In a separate meeting under EU auspices in March 2022, the countries sent their senior representatives “to continue the engagement to ensure follow-up to agreements reached at leader’s level,” according to a statement by the European Council from April 2022.

During their last meeting in Brussels in April, the parties also agreed to “the delimitation and demarcation of their bilateral border.” According to the Organization for Security and Cooperation in Europe guidebook on demarcation and delimitation mean:

Productive third trilateral meeting with @azpresident and @NikolPashinyan in Brussels

The precarious role of Russia in Azerbaijan-Armenia peace talks

Following the meeting in Brussels on May 22, the Russian Minister of Foreign Affairs, Sergey Lavrov, spoke on the phone with foreign ministers of Armenia and Azerbaijan. Officials discussed the situation in the region and the ongoing attempts at normalizing ties between the two nations.

However, some analysts believe Russia is losing ground in the negotiations. According to political analyst Ahmed Alili who spoke to Contact.az, “Russia is trying to continue negotiations on Karabakh on its turf and unilaterally dominate in mediating process. It is unwilling to include an alternative mediator.” But is failing at that, argues Alili. “Charles Michel was able to break this pattern and appear as an alternative. The results are already visible. Three meetings have taken place under the auspices of the European Council already,” said Alili.

According to an analysis by the International Crisis Group, engagement of more parties in mediation does not have to be mutually exclusive. “The OSCE Minsk Group (which includes Russia, France and the United States) permits discussions about the future of Nagorno-Karabakh. EU-hosted discussions help build ties with Brussels and facilitate conversations about the state border between Armenia and Azerbaijan. Russia should remain open to all of them. Despite Moscow’s concerns about exclusion, its peacekeeping presence and critical role in 2020 ensure its continued involvement. There is no evidence, at least to date, to suggest that any other party wants to usurp its position,” reads the ICG analysis.

The most recent meeting between Armenia and Azerbaijan mediated by Russia took place in Dushanbe on May 12 on the sidelines of the Russia-led Commonwealth of Independent States meeting. The foreign ministers of Russia, Armenia, and Azerbaijan discussed the terms of the November 9 ceasefire agreement signed in the aftermath of the 44-day war, including similar talking points from the Brussel's meeting: normalizing ties, border delimitation, and the opening of transport links.