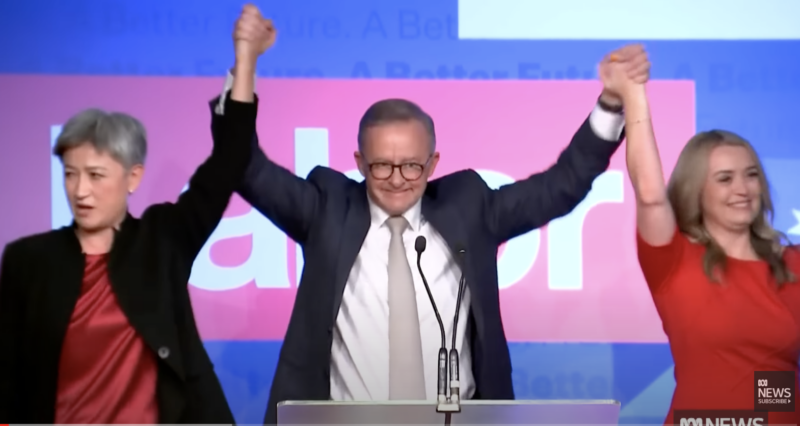 It took 10 days to finalise the results for the House of Representatives following the Australian Federal elections on May 21, 2022. However, one thing was clear on election night: the people’s desire for stronger climate action. Voters not only changed the government, they also sent a message to the nation's political parties that the climate crisis must be acted on urgently.

This is an amazing result for the climate! #AusPol2022

“There may have been lots of swirling currents but the results of the federal election were overwhelmingly that 2022 was, finally, the climate election.”
https://t.co/RL339wbwLT

House of Representatives and Senate results

Australia has compulsory voting and a preferential voting system. Voters must rank all candidates in order 1st, 2nd, 3rd, etc. To win, a candidate must receive more than 50 percent in the House of Representatives.

Scott Morrison’s Liberal and National (LNP) Coalition government was soundly defeated. Anthony Albanese led the Australian Labor Party to a historic victory, after nine years in opposition. The ALP has a two-seat majority in the House of Representatives, where the government is decided, winning 77 seats. The defeated government will have 58 seats, down 19 from the last parliament.

The Liberal and National parties have governed together for 19 of the last 26 years. Despite its name, the Liberal party is a conservative organization similar to the Tories in the United Kingdom. The National Party is a rural-based organization, which attracts many supporters in farming and mining areas.

However, the biggest winners were independents and the Australian Greens party. There were large swings in some traditionally conservative electorates to so-called “teal” candidates who campaigned against the Morrison government on climate change inaction, the need for a strong anti-corruption commission, and a range of gender issues. They have won five Reps seats, giving them six total.

The results of the Senate are still being finalised. At this stage Labor’s numbers have not changed, the Greens are up three seats and the LNP coalition is likely to have lost three or four seats.

Although the ALP had a stronger climate policy than the outgoing government, both the Greens and so-called teals argued for a better 2030 target than Labor’s proposed 43 percent reduction and an end to fossil fuel power generation and coal exports.

There were other prominent issues besides climate at play during the election, such as the state of the economy. Inflation, declining wages, and rising interest rates were major issues during the campaign. National security and foreign relations were also important concerns. Many voters, especially those of Chinese background, were unhappy with the way the government handled its relationship with China. The appalling state of aged care, Australia's national health program for senior citizens, was also a major priority for many voters.

Gender inequality and the treatment of women both at home and in the workplace have been high-profile issues in the last parliament. Many people hope that the increased number of women parliamentarians, and an increase in diversity, will help to address these and other issues:

Thank you to all the women who voted on women’s issues this election. Now let’s see more of us standing for election!!! ❤️💃#auspol #AusVotes2022

The Albanese Cabinet has a record number of women.

The performance and character of the Liberal Prime Minister, Scott Morrison, was also a focus of the campaign. He was seen as missing in action during the recent horrific bushfire and flood emergencies. COVID-19 played its part due to the slow rollout of vaccines and rapid antigen tests. The PM was also unpopular in Western Australia for arguing against the state’s tough border closures.

Ronni Salt (a social media alias) has been a frequent critic of the PM. Her post-election farewell is a scathing assessment:

Who'd have thought a huge local community with zero political campaigning experience could achieve so much! The power of vision positivity and hope! So now, we have the most amazing local candidate. What an inspiration you are – take a bow @ChaneyforCurtin https://t.co/IQeqWLnqtZ

The next three years

Many Australians had hoped for a minority Labor government with the teal independents and the Greens holding the balance of power:

My hope at this stage. Minority Labor gov with a big mandate from all the greens/Ind vote to push harder on climate change. LNP scrambling for a leader as contenders lose their seats. I’m liking that scenario. #AusPol2022

This was not to be. Nevertheless, the Australian Greens now hold 12 Senate seats, meaning the new Albanese government will need to negotiate with them over legislation.

In addition, high profile climate activist and former member of the National Rugby Union team, David Pocock, is likely to win a Senate position in the Australian Capital Territory from a Liberal assistant minister. In 2021 he brought together 300 sportspeople to campaign for deeper cuts to greenhouse gas emissions. Pocock is already pushing broader environmental issues:

This is not what Australians want and expect from government. Time to release the long overdue State of the Environment report and get serious about protecting our incredible biodiversity.https://t.co/zE3lsT7V4a

The ALP has already started talking up its commitment to climate action. New foreign minister, Penny Wong, has emphasised its importance during visits to Pacific Island nations: