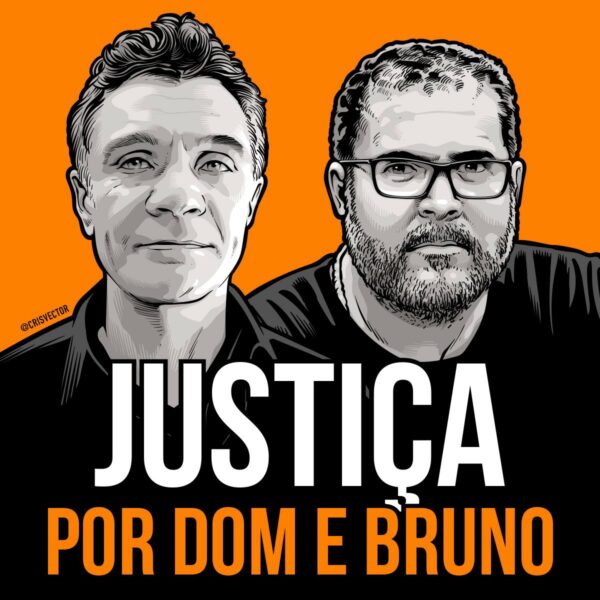 Dom Phillips, a British journalist, and Bruno Pereira, a Brazilian expert on indigenous people, were killed while doing investigative work in a remote corner of the Amazon in early June | Art: Cris Vector/Used with permission

Ten days after British journalist Dom Phillips and Brazilian Indigenous expert Bruno Pereira were reported missing on June 5 while doing investigative and reporting work in the Javari Valley, a remote corner of the Brazilian Amazon, the Brazilian Federal Police confirmed that a man arrested during the investigation confessed to the murders of both men and indicated the place where the bodies were found.

Amarildo Oliveira da Costa, known as “Pelado” (a nickname that directly translates to naked in Portuguese), a fisherman who lives in the region, was arrested with his brother, Oseney da Costa Oliveira, known as Dos Santos, in relation to the case. Pelado told the police he helped to bury the bodies of both men, but another person was responsible for killing them.

According to the investigation conducted by the Civil Police in the Amazonas state, the motivation for the killings is likely due to the fact that Pereira was “getting in the way” of Pelado's business, with reports of illegal fishing within the Indigenous territory, as reported by Agência Pública.

While the Federal Police dismissed suggestions that the killings were carried out upon orders from organized crime, the Indigenous People Union of the Javari Valley, Univaja, the main Indigenous entity in the region, insists that a probe must continue to answer all the questions raised in the case.

The Indigenous group published a statement claiming the investigation is not taking into consideration the reports they sent to authorities in late 2021.

The Indigenous people Dom and Bruno so admired are doing such incredible work in trying to track down their friends. No words to express my respect for them. https://t.co/KGOir5sIko

The searches were led by Univaja's Surveillance Team, EVU. The group believes its critical reports could be the reason why Pereira was targeted and threatened with death threats. If the investigations do not continue, Univaja worries about the safety of those who will stay in the region.

The 41-year-old Pereira was part of Funai, the Brazilian National Indigenous Foundation. He had a deep knowledge of the region and the people living there and was regarded as the greatest expert of his generation on isolated groups. He spoke four Indigenous languages. A viral video where he sings a Kanamari's people song shows how close he was to those communities.

Reporting is not an adventure. It is a public service that is only dangerous in places where the government is omissive in fighting crime or, worse, encourages such crimes.

During the same day the Federal Police denied the information passed by a staffer of the Brazilian Embassy in London to Phillips’ family about bodies being found, Bolsonaro revealed in a radio station that there were “indications that something wicked” was done to them and it would be difficult to find them alive.

In another interview, he said Phillips was not well seen in the region because of his reporting and that he should have been more cautious.

Many of Bolsonaro's supporters started to bring up the murder of Sister Dorothy Stang, an American nun killed in 2005 for defending the landless in northern Brazil, claiming Lula da Silva's government wasn't blamed for it then.

Daniel Camargos, a Brazilian journalist who worked with Phillips, stressed in an article in Repórter Brasil, while searches were still on:

The fact is that Javari Valley’s region is an area fraught with violence. Episodes of shooting attacks to Funai’s surveillance posts have been repeated since Bolsonaro came to power. The president’s anti-Indigenous, anti-environmental, anti-press and NGOs speech serves as fuel to inflame offenders, who feel guaranteed by Brazil’s main authority.

Another journalist, Jamil Chade, reports that the murders could “bury” Bolsonaro's attempts to reverse a global negative image and worsen the Brazilian diplomacy crisis. The UN, added Chade, has already asked for an impartial investigation into the case, and Indigenous peoples stepped up the pressure against the government with the organization.

Meanwhile, an association of Funai's workers known as INA and the Brazilian nonprofit Institute of Socioeconomic Studies (Inesc) have launched a report analyzing policies applied during the current government called, “Anti-Indigenous foundation: a portrait of Funai under Bolsonaro's government.”

Sorry, Mayor Adams: Gentrification is nothing like slavery — in fact, it’s about freedom