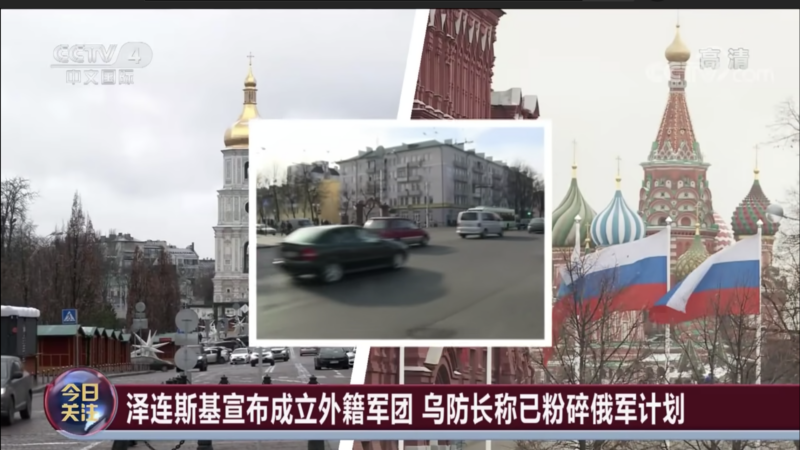 Screenshot from CCTV report on Russia's invasion of Ukraine titled “Ukraine does not accept the ultimatum, has NATO indirectly participated in the war?”

Since Russia’s invasion of Ukraine on February 24, 2022, China’s official government position continues to shift, with its actions often incongruous with its rhetoric. China abstained from the UN resolutions to condemn Russia's actions, blamed NATO for provoking conflict, and amplified Russian conspiracy theories. Simultaneously, the foreign ministry continues to call for peaceful negotiations and rejects any form of third party interventions including economic sanction or military assistance.

While China has been Russia’s largest trading partner for the last 10 years (a quarter of Russia’s foreign reserves are held in renminbi), last year, the country also became the largest importer of Ukrainian goods, primarily iron ore and corn. As a nation heavily dependent on foreign energy and food, small miscalculations could jeopardize the domestic livelihood of millions. Regionally, the majority of nations along the Belt and Road project depend, at least in part, on Ukraine and Russia for wheat, barley, maize, rapeseed oil, and sunflower oil. Russia is also the world's largest exporter of nitrogen fertilizer. Continued regional unpredictability could seriously destabilize China’s sphere of influence in Central Asia.

That being said, Beijing has had trouble balancing the perceptions and interests of Eastern Europe. In the past, the Chinese government has used economic pressure on Lithuania to force its position. While Beijing has invested more than USD 129 billion into Eastern Europe since 2009, its continued justification of Russian “special operations” is turning Ukrainians even more decisively towards Europe and the United States. China’s diplomatic staff have attempted to walk a fine line by not antagonizing any side, often failing on every side.

Beijing's official policy has remained ambiguously in support of the Russian cause, but against its consequences. Chinese media does not refer to the conflict as a war, primarily referencing the Kremlin’s definition of “special operations.” Chinese foreign embassies have widely shared the Kremlin’s statements on the Bucha Massacre, inferring both foreign and Ukrainian interference. China’s Foreign Ministry has also echoed Russia’s unsupported claims that the United States was developing bioweapons in Kyiv.

All the while, China has offered to mediate the war. China’s ambassador to Ukraine, Fan Xianrong, stated on March 14:

China will never attack Ukraine, we will help, in particular in the economic direction. In one year, our country imports goods from around the world worth more than $3 trillion. We are ready to help you develop. In this situation, which you have now, we will act responsibly. We have seen how great the unity of the Ukrainian people is, and that means its strength.

In a meeting with Emmanuel Macron and Olaf Scholz, Xi Jinping reiterated that the West must work towards “a balanced, effective and sustainable European security framework.” The spokesperson of the Foreign Ministry, Zhao Lijian, stated on April 1, that Western leaders should not force China to “choose a side or adopt a simplistic friend-or-foe approach. [They] should, in particular, resist the Cold War thinking and bloc confrontation.”

In a video interview with Global Voices, Ron Keller, retired Dutch ambassador to Ukraine, China, Turkey, and Russia between 2005 and 2017 said, “In my view, China has been concerned about NATO’s and America’s expansion because they are afraid of similar pressure regarding Taiwan, Tibet, and the South China Sea.”

China’s state sponsored media has placed considerable blame for the conflict on NATO and the United States. Zhao Lijian noted that Russia was left no choice, because, “As the culprit and leading instigator of the Ukraine crisis, the U.S. has led NATO to engage in five rounds of eastward expansion in the last two decades after 1999.” During the 2022 Winter Olympics, Russia and China released a joint statement, affirming that “The sides oppose further enlargement of NATO and call on the North Atlantic Alliance to abandon its ideologized cold war approaches.”

Sanctions have remained China’s major fear. China’s Foreign Ministry has noted they ​​“disapprove of solving problems through sanctions, and [they] are even more opposed to unilateral sanctions and long-arm jurisdiction that have no basis in international law.” In 2021, the European Union sanctioned Chinese lawmakers over abuses in the Xinjiang region, stalling a multilateral investment agreement and starting an economic tit-for-tat. China’s foreign minister Wang Yi has reiterated in a conversation with the Spanish foreign minister that “China is not a party to the crisis, nor does it want sanctions to affect China.”

Keller concluded “There is a genuine historic concern of foreign adventurism within China. Consider the legacy of French and British bombardment of Shanghai, German and Italian occupation of Beijing, Russian invasion of large swaths of Western China, British expansion into the Himalayas, and much more.”

China’s social media, which is under heavy oversight by national censors, has limited discussions of the war in Ukraine. Most partisan opinions on Weibo have been removed. One such post, “No-one dares to stand with Ukraine right now, It's all one-sided support for Russia,” was removed within hours of posting. Pro-Russian posts have similarly been taken down, including a post from Russia’s state-news channel RT that thanked China for its support in the war against Ukraine.

In April, Digital Times leaked instructions to media networks from the ​​Cyberspace Administration of China (CAC), directing “commercial websites, local and self-published media not to conduct livestreams or use hashtags about the Ukraine conflict.” Douyin, Weibo, Bilibili, and WeChat have all removed thousands of posts regarding Russia’s invasion of Ukraine.

Although there have been attempts to keep the war off the internet completely, censorship is not applied evenly. Official and social media posts echoing the Russian narrative are overwhelmingly supported and reposted by official government channels. The Chinese media regularly quotes reports by Sputnik and RT, and have been fully in support of the Russian justification for the “special operations,” blamed Ukrainians for war crimes, and admonished the United States.

On the other side, Chinese voices have reverberated from within Ukraine. Wang Jixian, who has been covered by Global Voices in the past, is a 37-year old programmer and has been working in Odessa since July 2021. On February 24, Wang started uploading short video blogs via WeChat and YouTube. Wang has also refused to relocate to Belarus because of its complicity in the armed conflict, and has continued to report on the damages of the Russian invasion.

Wang has not been spared criticism at home. Online commenters have claimed he was working for foreign powers as a paid actor, and some requested he be extradited and tried in China. Wang has stated he has been attacked on both fronts, by Russian soldiers on one side and Chinese propagandists on the other. He often punctuates his video diaries with the words “We’ve made it through another day (又活过了一天).”

As the situation develops and alliances shift, it becomes increasingly more difficult to distinguish the line between China’s domestic and international rhetoric, from its military and economic strategy, or its moral and ethical attitudes. On March 12, Wang posted a video directed at Chinese media critics:

Who are you? What are you afraid of? Why are you so scared of me being able to speak? I do not utter any threats; I don’t advocate murder. All I do is make a plea for people to respect life and end this war. Why are you so afraid of people knowing what’s really going on? We don’t have nuclear weapons; we don’t have any guns. Why do you only want the voices that advocate murder to be heard?