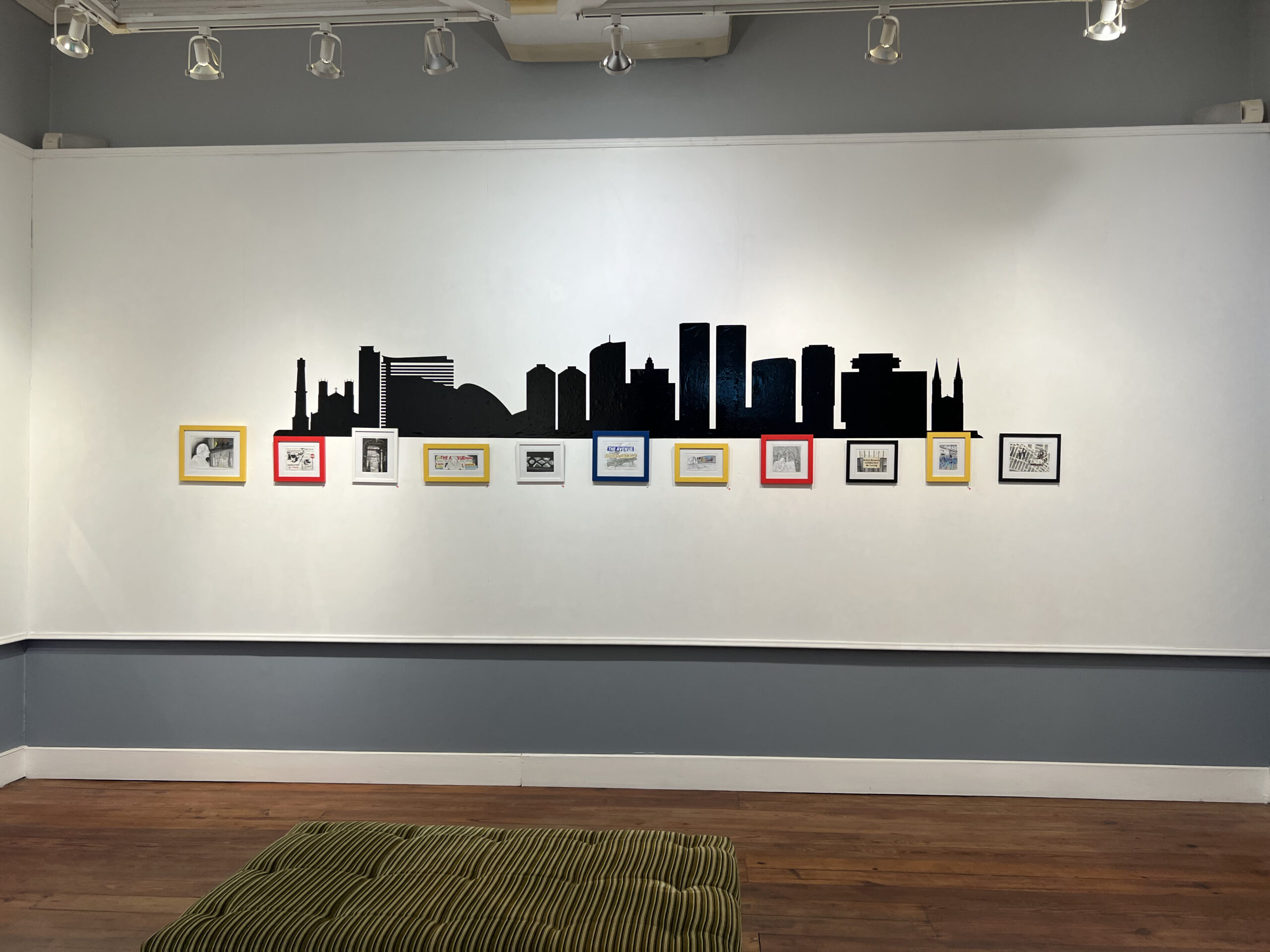 Some of the artwork at Leona Fabien's exhibition, ‘Woodbrook, a living hell,’ which was on display at Port of Spain's Soft Box Gallery from April 29 to May 13. Photo by Janine Mendes-Franco, used with permission.

To the west of Trinidad's capital, Port of Spain, lies a sprawling suburban community developed on land that was once home to three sugar estates. Named after the largest of these, Woodbrook's origins as agricultural lands eventually morphed into a residential area for the up-and-coming “coloured” middle class after being bought in the early 20th century by the Siegert family — founders of the company now called Angostura Limited, which manufactures the world-famous Angostura Bitters.

Perhaps partly due to the Siegerts’ successful business and good reputation, the community sparkled with promise and respectability. As the educated middle class began to build their own futures, Victorian-style gingerbread houses became the norm, giving the large lots of Woodbrook their own charm and unique aesthetic. By the mid-1900s, as with any vibrant community, businesses strategically popped up to provide for residents’ needs: grocery stores and pharmacies, sports and social clubs, schools, theatres, cinemas, and the like. The streets and parks where children would play and neighbours get together became busier, and soon Woodbrook became a fixture on the annual Carnival parade route, with several steel orchestras also making Woodbrook home for their rehearsal spaces (called pan yards). Now, well into the 21st century, the area has become increasingly commercialised, to the point where residents feel under siege by noise pollution, traffic, vandalism, littering, loss of privacy, indiscriminate parking, construction, and even crime. 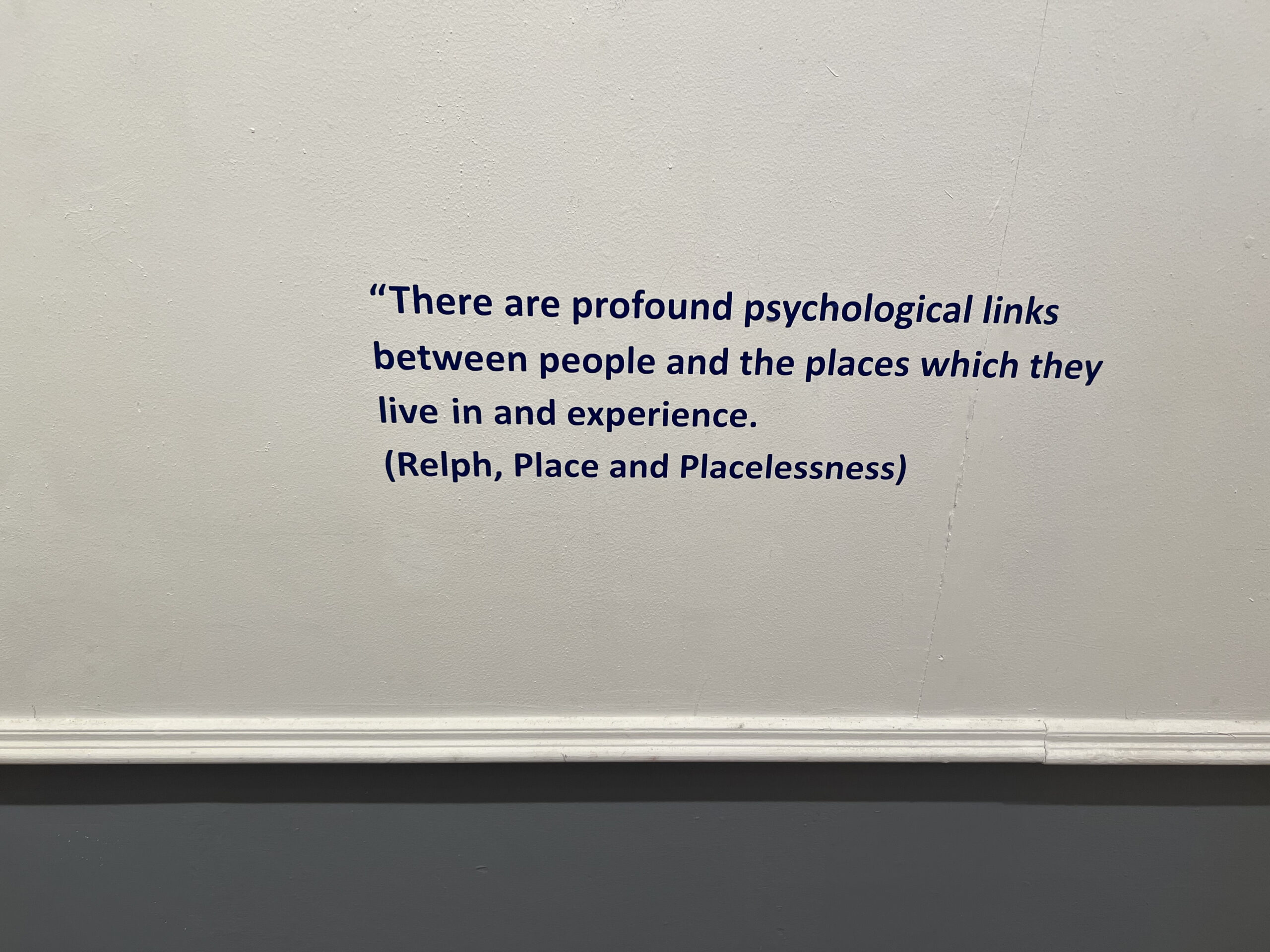 A quotation from Edward Relph's ‘Place and Placelessness’ (1976), adorns the walls of the exhibit. It reads: ‘There are profound psychological links between people and the places which they live in and experience.’ Photo by Janine Mendes-Franco, used with permission. 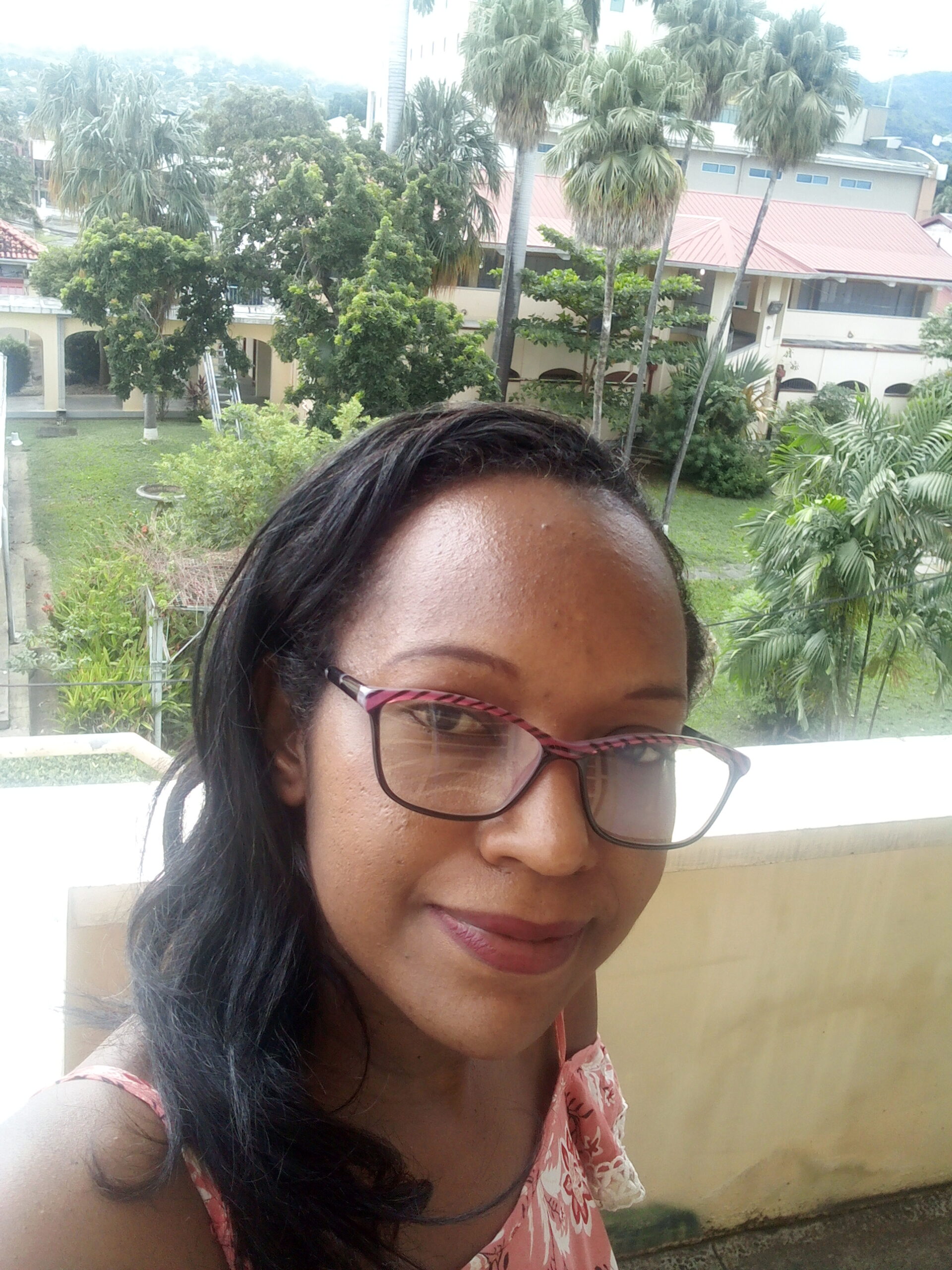 Trinbagonian artist Leona Fabien, whose most recent exhibition, ‘Woodbrook, a living hell,’ examines the impact of commercialisation on one of Port of Spain's most beloved suburban communities. Photo courtesy the artist, used with permission.

Artist Leona Fabien, who has been a Woodbrook resident for the past 33 years, addressed some of these issues in an art exhibition at Soft Box Gallery in Newtown, Port of Spain, which ran from April 29 to May 13. Called “Woodbrook, a living hell,” her exhibition explores the myriad ways in which the changes to Woodbrook's physical and cultural landscape have “negatively impacted the residents’ feelings of belonging, familiarity, and stability.” I attended the exhibit where I met Fabien, who agreed to an e-mail interview.

Janine Mendes-Franco (JMF): With this exhibition, you have taken on a topic of great national importance, yet it feels deeply personal. As a Woodbrook resident, how did you achieve this balance and what types of conversations do you hope it might spark?

Leona Fabien (LF): The study was inspired by my personal interest in the issues affecting the community of Woodbrook. My interviewees shared some of my sentiments and helped me to be aware of the depth of the impact of commercialisation on them [although] some younger interviewees and one ex-resident who now lives abroad […] were able to offer a different perspective. I’m not sure how successful I was in achieving a sense of balance, but I certainly tried to put myself in their position to attempt to understand where they were coming from.

I hope that issues surrounding the basic rights of residents will be addressed, as the businesses appear to have much more influence when pursuing their interests. Issues surrounding our built heritage I think should be discussed as a matter of importance. 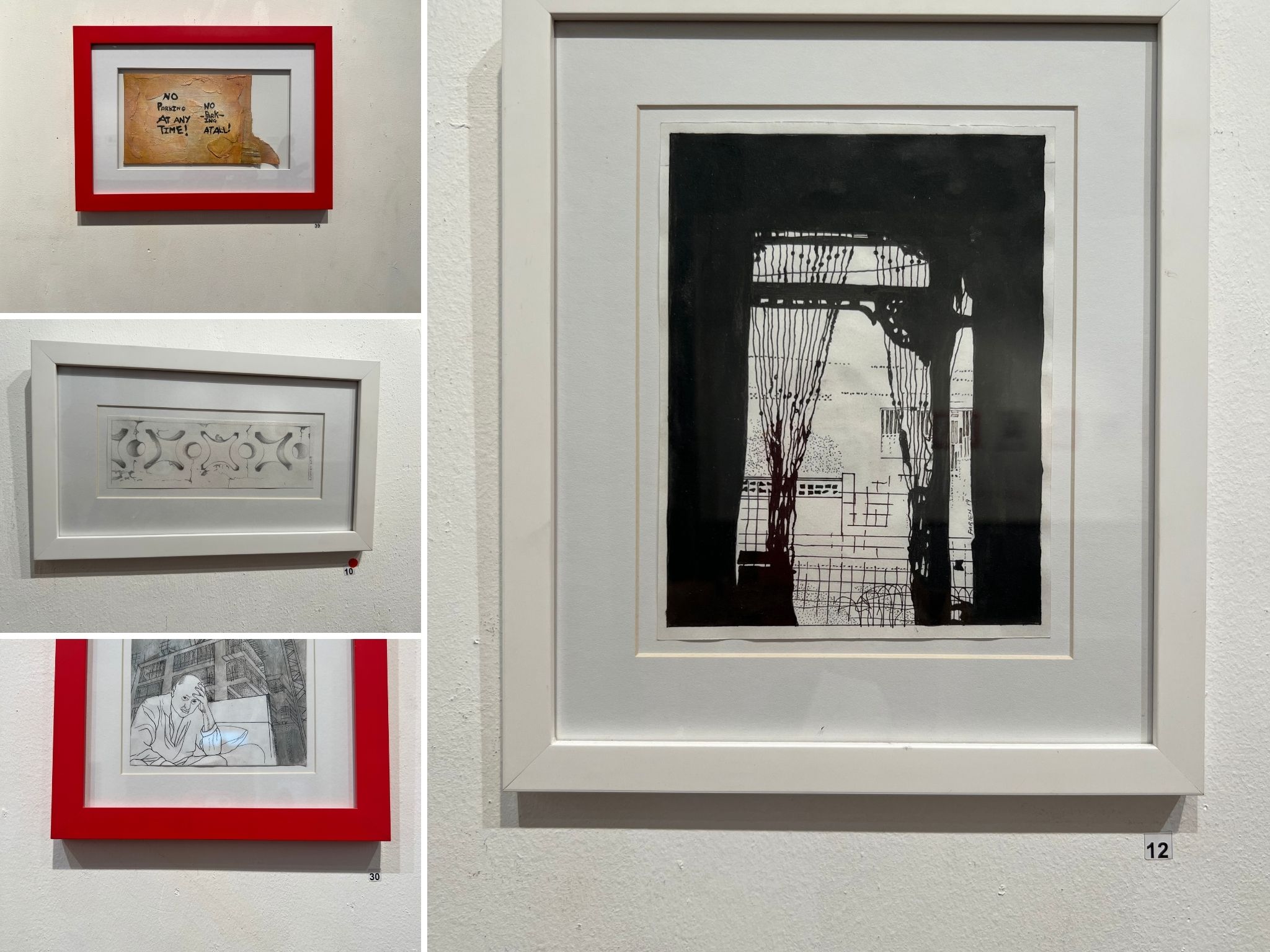 An array of Leona Fabien's ink drawings at her exhibition ‘Woodbrook, a living hell.’ Photos by Janine Mendes-Franco, used with permission.

JMF: Art is, by nature, subjective — but this is not just “pretty art” for decorating walls. This is social commentary. Is there a particular message you wanted to send to viewers?

LF: The effects of commercialisation have impacted this community’s cultural, social and everyday practices. [While it] has introduced some positive factors for some of the younger residents, such as their close proximity to food outlets and night clubs, for the longstanding and older residents, the impact has been more negative than positive. [They] have experienced feelings of alienation [and] loss of their familiar cultural and physical landscape. I think that whilst patrons come into the community to do business, be entertained or to purchase food, they must also be sensitive to [those] for whom the community symbolises a place of rest, unwinding, serenity, gathering of the family – a home.

JMF: As an artist, how did growing up in Woodbrook help to shape you, and do you find it more creatively energising or stifling now?

LF: Growing up in Woodbrook meant that I was exposed to moving in and out of older style buildings — which I refer to as heritage buildings — and this developed my appreciation for them. They are a part of my familiar landscape. Woodbrook is a creative community. There are pan yards, galleries, mas camps, playgrounds, squares to help inspire creativity. There is the yearly Carnival which passes through the community, and which was an exciting time (for me, at least). So my sense of design, performance art, music appreciation were all developed in this community. […] Woodbrook has changed, but I think that it is still inspiring. 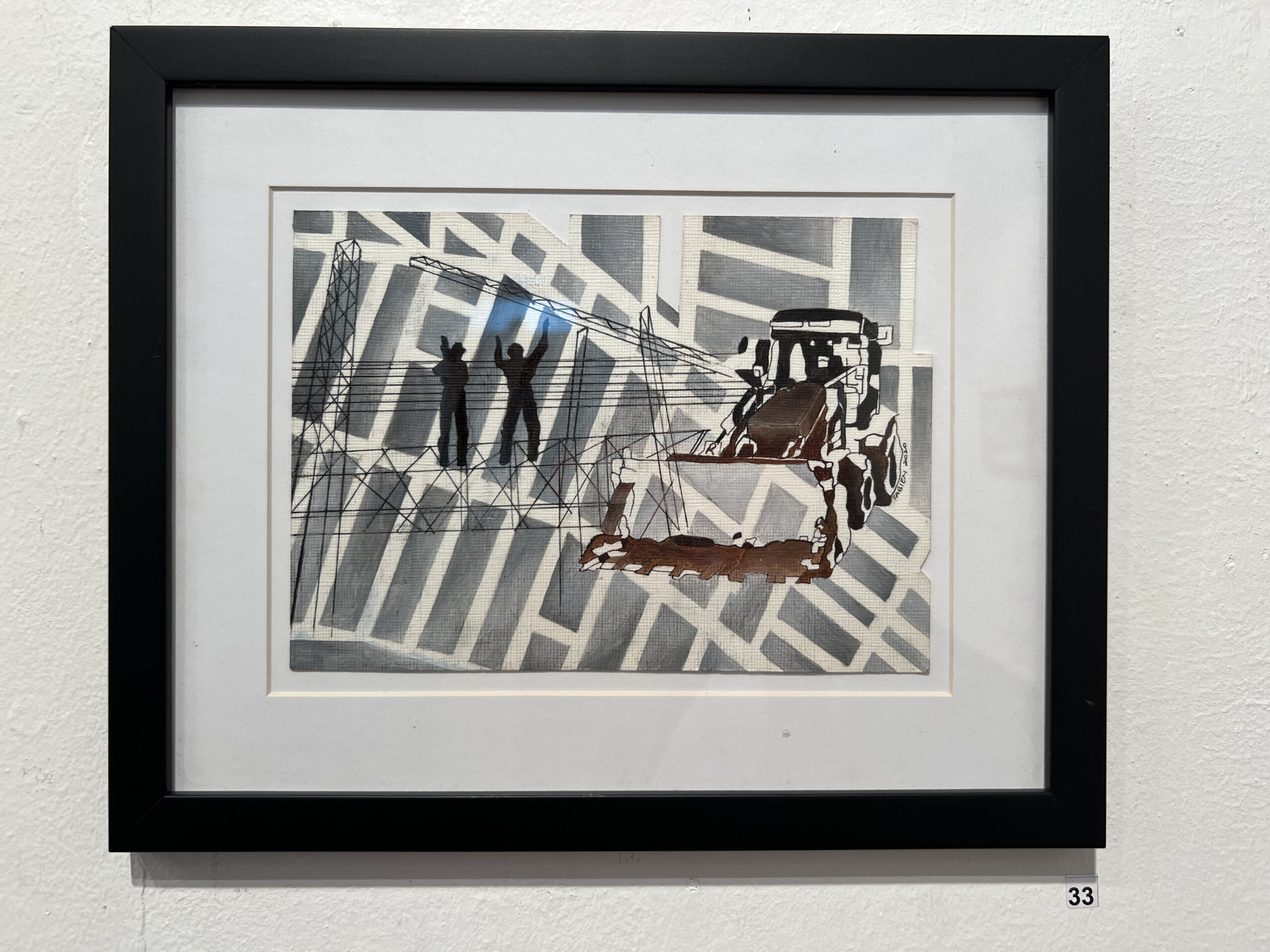 JMF: One of the challenges, I suspect, with local development, is that consultation is given lip service. Stakeholders are hardly ever engaged in meaningful ways and throughout the life of a project. What do you think about this in the context of the government's proposed “revitalisation” of the area?

LF: I’m not sure to what extent the residents were consulted on this vision for Ariapita Avenue. It seems that the problem of noise pollution was posed and according to the article, the problem was not addressed at all. Security was mentioned and that is only one of the many problems experienced by residents. I cannot imagine Woodbrook residents agreeing with a project like this, but that is my opinion. I also suspect that the voices of the residents will be silenced — if acknowledged at all — as the project is realised. My interviewees were of the opinion that these visionaries, designers, businessmen and government ministers were not genuinely interested in the serious issues affecting the residents. I have also noted that the Ariapita Avenue enhancement project is part of an overall revitalisation plan, but […] I wonder why they did not start their project in the heart of downtown instead of the residential community of Woodbrook?

JMF: Would you move if given the chance, or do you have hope that there can be room for everybody with the right planning, and with an attitude reset that is mindful of everyone in the community?

LF: I really like the community and am attached to it, but perhaps because my family still lives there and my childhood memories are connected to there. Once there is proper and considerate planning and a sense of balance between the residents’ needs and the interests of the businesses then I can continue to live in Woodbrook. I am not sure that there is hope, though, as the residents’ needs and voices tend to not be highlighted enough. 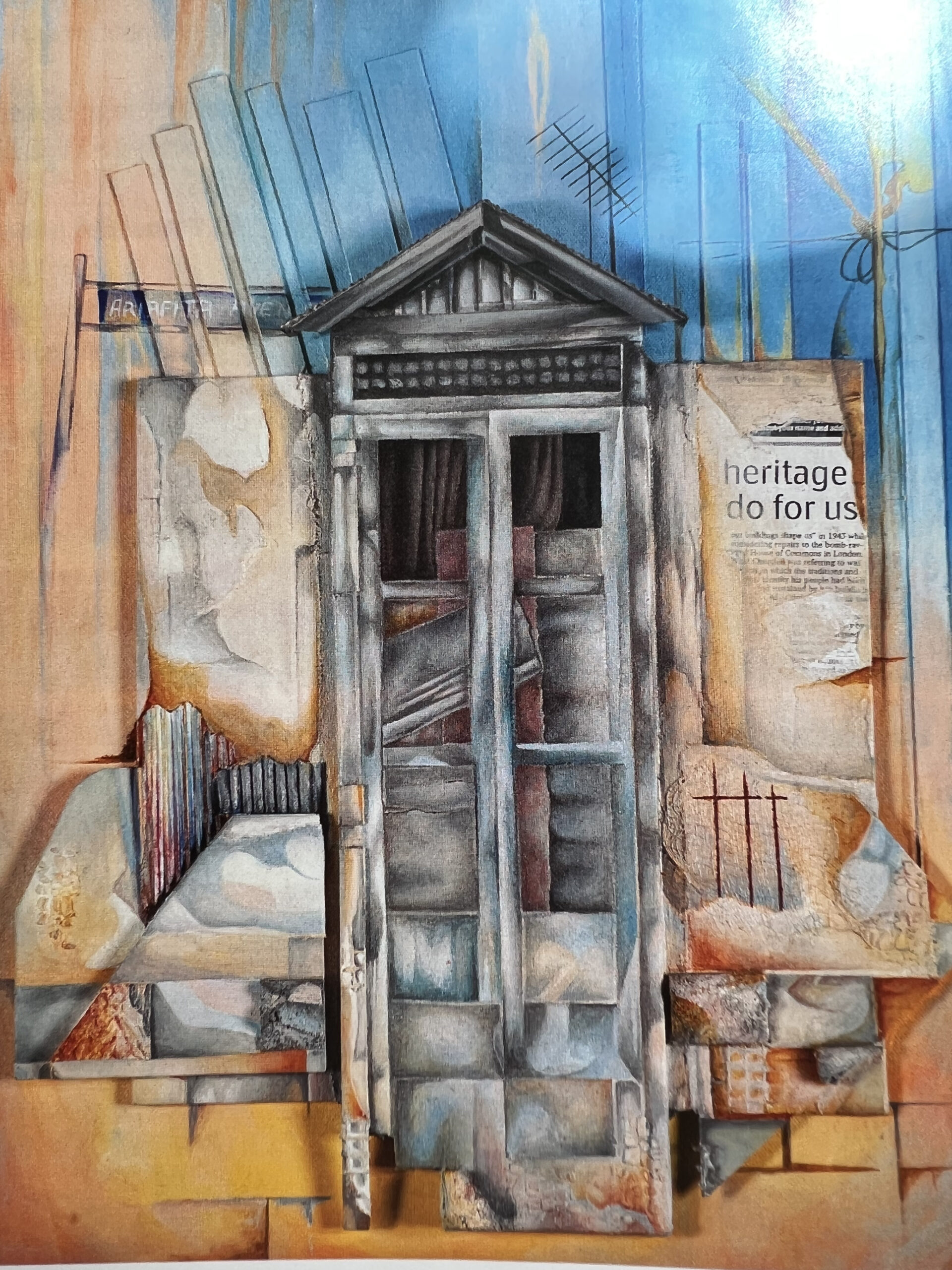 JMF: Do you have a favourite piece in the exhibit?

LF: “Home and Heritage.” The potential loss of heritage, home, [and] memories associated with the home are examined in this piece. Featured in the centre of the painting is an old “patched up” gingerbread house with crude galvanise steel sheeting and pieces of wood positioned behind the window to help secure and stabilise the glass. Visible behind the window are curtains, which suggest that someone currently dwells there. In the foreground, there is evidence of a brick and concrete wall, partly damaged, and surrounding either sides of the wall are remnants of galvanise and iron fences.

This piece also examines the theme of ‘repairing of the home’ because it provides shelter, has sentimental value and is a place of attachment. [I used] cardboard for the galvanise effect, molding paste for raised effects, found textures, and newspapers retrieved from the National Archives of Trinidad and Tobago, making reference to the state of heritage buildings in Trinidad. The newspaper clipping in particular speaks of what our heritage buildings do for us; its torn and incomplete inclusion in this painting makes reference to how our built heritage is often quickly demolished. 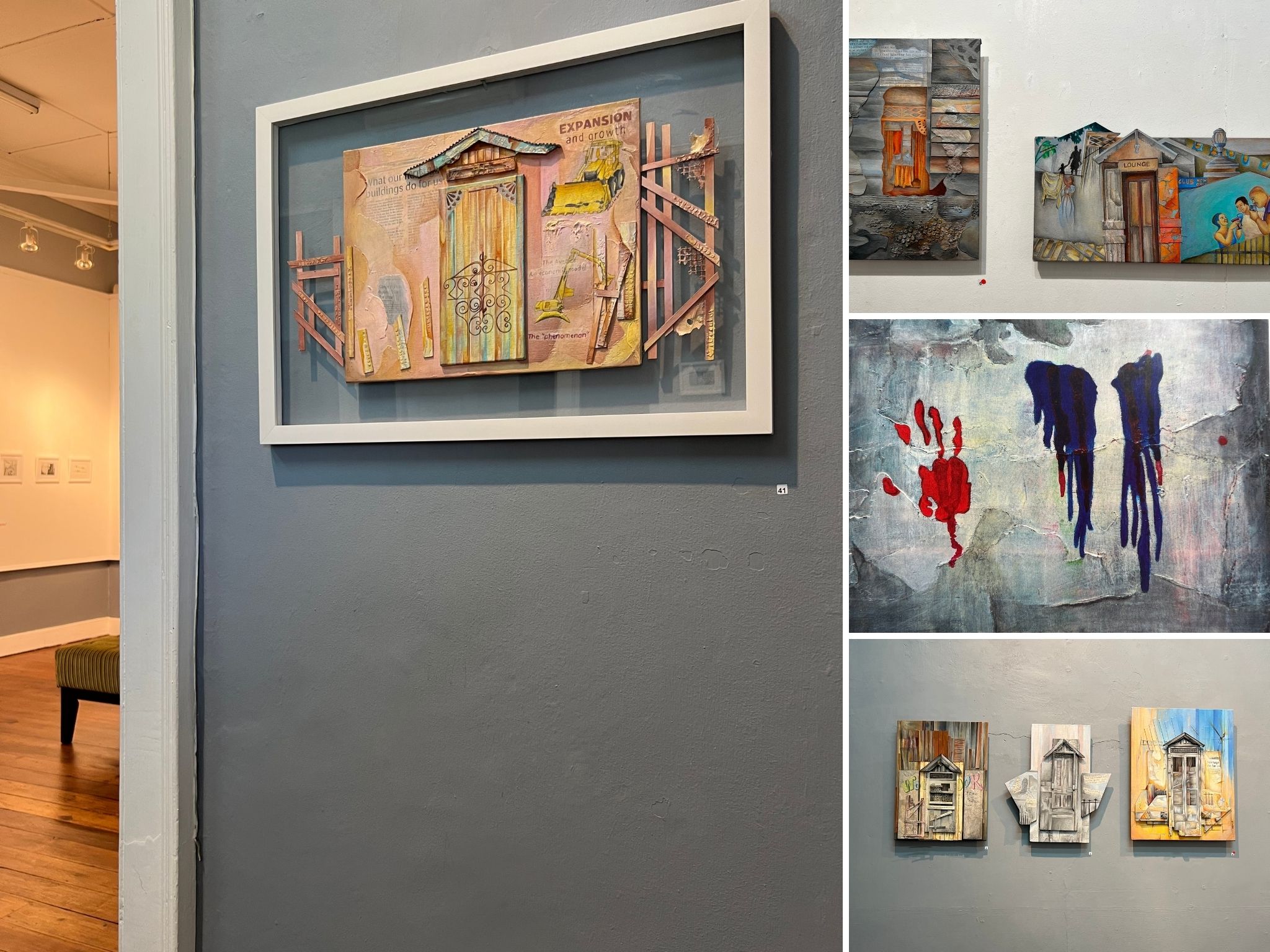 Some of Leona Fabien's mixed media pieces at her exhibition, ‘Woodbrook, a living hell.’ Photos by Janine Mendes-Franco, used with permission.

JMF: I love that the exhibit wasn’t just in one style, or using one medium. What was that creative process like and how did the various styles play into the bigger themes?

LF: The smaller pieces were done in pen and ink whilst the bigger paintings are mixed media pieces. The creation of the miniatures allowed me to think more deeply about the issues. Pen and ink is new to me and perhaps that challenged me to be more descriptive in treatment of the social, cultural and physical landscape of Woodbrook. Working in black and white is quite different from using paint, colour and mixed materials. The process was more challenging and forced me to think differently as I considered the principles of design: balance, contrast, unity and then the elements such as texture, shape and the quality of the lines, use of negative and positive space. The use of pen and ink, and then the scale of these pieces, helped to maintain the idea that the themes being examined are personal for many of the residents and this forces the viewers of the art to position themselves more intimately to examine the work and the issue.

The use of acrylic paint, mixed media and collage techniques to create the bigger pieces […] allowed [me to create] without feeling any confinement based on size, shape, and techniques. Use of mixed media is something that I enjoy doing. I embrace the freedom it gives to be inventive and intuitive as I freely incorporate newspaper articles relevant to the themes being explored. I also find it therapeutic. The use of cardboard and layered textured papers, for instance, help to describe dilapidation of a building, and even the crude and cruel actions of those with power. The procedures implemented assisted as I explored the issues of loss, change, dilapidation, alienation, many of which were not always straightforward.

JMF: What's important to you regarding the architectural aspects of the neighbourhood, which are so well represented in your work?

LF: We can do something about the dilapidated state of the buildings in Woodbrook. Between the government, the National Trust of Trinidad and Tobago and private companies, more money can be invested into the preservation and restoration of the buildings. These buildings are a part of our history and heritage […] they are artifacts worthy of preservation. In various cities around the world, old houses have been preserved or restored in certain districts, and the district becomes a form of heritage tourism. However, restoration of other people’s property can get complicated and the conditions for the restoration of the houses will have to be agreed on by all parties involved. We also would not want a problem such as gentrification happening either.

Michael Burry recently warned a consumer recession is likely. Getty Images Recent reports of layoffs at Tesla are an ominous...

Tarhana dish. Photo from the personal archive of Temenuzhka Mateva, used with permission. This is the second of a three-part...

After Texas school shooting, we must put more resources into mental health