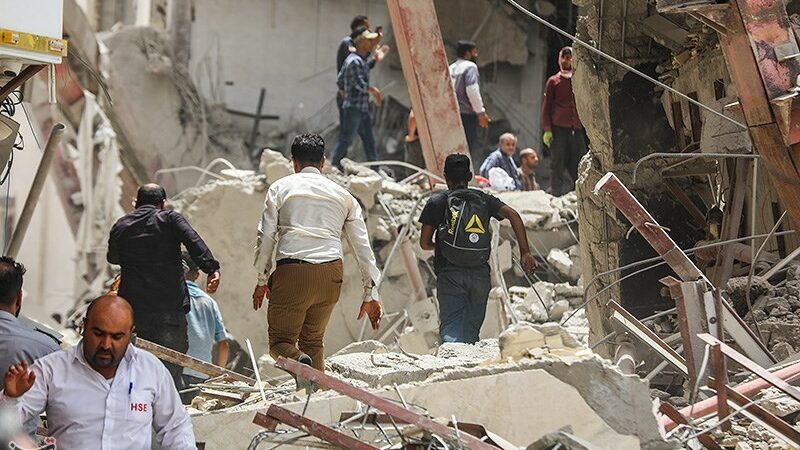 At least 29 people were killed after a metropol building collapsed in Iran's city of Abadan, triggering protests in several areas across the country. Image used from Tasnim News Agency, under a Creative Commons Attribution 4.0 International License.

Hundreds of Iranians took to the streets in Abadan, the capital of the southwestern oil-rich province of Khuzestan, demanding justice after a 10-storey Metropol building collapsed on May 23, killing at least 29 people.

Officials said 37 people were also wounded and it remains unknown how many people may still be trapped under the rubble as rescue operations continue.

The protesters in Abadan chanted against “corrupt authorities” and  “Ali Khamenei, Supreme Leader of Iran”. Some also chanted pro-Pahlavi dynasty slogans, in reference to the monarchy that ruled the Islamic republic before the 1979 revolution.

Thousands of Abadan residents took to the streets to protest against the incompetence of the Islamic Republic's regime after the catastrophic collapse of the #Metropol، building and chanted anti-government slogans#IranTruthpic.twitter.com/8qt4AUqJDT

Several mourners chanted slogans against Hossein Abdolbaghi, the builder and owner of Metropol who reportedly has strong ties with the authorities. Iranian officials initially announced Abdolbaghi’s arrest, then reported that he was among the dead, prompting many to reject the official claim that he is among the casualties.

May 27, 2022
Civilian volunteers from every corner of #Iran have come to #Abadan to help with rescue operations, after collapse of #Metropol high-rise building
Read more at https://t.co/pmVdfreIkZ #KayhanLife #ForIran pic.twitter.com/UREuiIRhfK

When Iranian authorities, including Ali Khamenei, ordered an investigation into the disaster and punishment of those accountable, several other demonstrations of solidarity with Abadan were held in other cities like Khorramshar, Shahin Shar, Ahvaz, Yazd and Behbahan.

May 27 – Bushehr, S #Iran
Locals rallied in Bushehr in solitary with Abadan where a tower collapsed killing 24+ppl. Iranians rightfully blame the collapse on the regime. #IranProtests pic.twitter.com/a3RpzKusc8

Thousands of Protesters in Yazd have come to the streets to support Abadan.#Iran#IranProtests #متروپول_آبادان pic.twitter.com/xvuly6gp3D

The tragedy stoked the anguish of many against authorities for turning a blind eye toward reports that have warned against poor safety standards in construction and the building’s weak structure.

Iran Construction Engineering Organization, a Tehran-based NGO that provides engineering advice and has contracts with several municipalities and Iran's government, announced that they had warned the municipality about the danger.

Critics have repeatedly drawn attention to corruption in the building permits and private and state-linked construction projects for rebuilding Abadan after the Iran-Iraq war, amid complaints of poor quality construction practices.

Previously, one of Tehran's city official said Iran has an ‘epidemic’ of municipal corruption.

Iran's corruption is not limited to one city or municipality. Occasionally, Iranian officials openly accuse each other of corruption. Recently, a leaked audio of Iranian Revolutionary Guards Corps officials indicated the embezzlement of $3 billion, which is directly under command of Khamenei, while press often report on millions, or even billions, of dollars have gone “lost” or “vanished” within Ministries or banks.