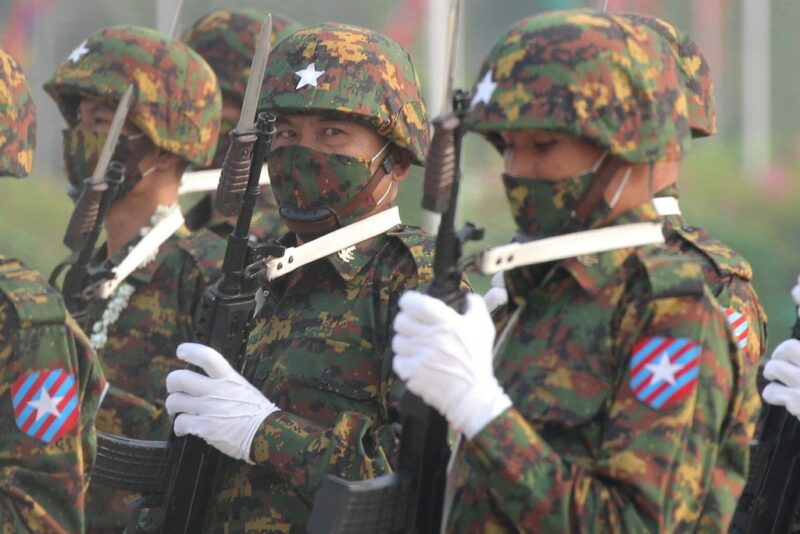 This article written by Desmond was originally published in The Irrawaddy, an independent news website in Myanmar. This edited version is republished on Global Voices as part of a content-sharing agreement.

I’m not a military expert, just someone who loathes my country’s military. So it is unsurprising that I am struggling to come up with the correct name for the military forces in Myanmar today.

My job, which includes writing reports, periodical analyses, and preparing briefs for international donors and audiences, requires me to learn hundreds of military terms. My supervisor, a native English speaker, has helped me out a lot, but we still have disagreements over what term to use for the army of Senior General Min Aung Hlaing, who led the 2021 coup in Myanmar.

For me, there are two especially troubling terms used to describe the military. The first is “Tatmadaw,” which in the Burmese language means “Royal Armed Forces.” This was the name used for Burma’s army in the pre-colonial era when Burma was ruled by a monarchy. “Royal” is understood as glorious in Burmese culture.

When covering and discussing the coup, many analysts and so-called Burmese experts used the phrase “the Myanmar military, also known as the Tatmadaw.” But the unscrupulous use of Tatmadaw by many external analysts is offensive and incorrect. The word is too good for Min Aung Hlaing’s army, which is just a group of armed men killing their own people. There is nothing “royal” about the actions of the present-day Myanmar military.

The second troubling term is the use of “Myanmar or Burmese military.” For those who are familiar with Myanmar, Myanmar or Burma both refer to the Bamar, the largest ethnic group in the country. However, in the post-1988 period, the military regime deliberately propagated the word “Myanmar” as an overarching term to represent all ethnic groups. It was an attempt at artificial fabrication. The ethnic minorities, some of whom have their own armies, never accepted it. The ethnic armies, who have fought the military regime for decades, use the term “Burmese army,” meaning the armed forces fighting for the Burmese, or Bamar, people.

As a Burmese person, I always felt ashamed when my ethnic friends referred to the “Burmese army,” as I felt that they were saying that my army was committing all those atrocities in ethnic regions. But I was powerless to change the name. Many of my fellow Burmese have also naively accepted the name. But since last year’s coup, many Burmese people have been given the unwelcome opportunity of seeing the true, evil face of the military. And many of them are now fighting back against the military.

Now, we Burmese are not using the term Tatmadaw and are just referring to the armed forces as “Sit-tat,” or military, with no reference to glory. Some people are also referring to the military as ‘Sit-kwe’, or dog soldiers, a reference to the military being dogs who only obey their masters. It is derogatory, but I feel it is the most correct term for them. Many Burmese are saying that we have our own military now, the People’s Defense Forces led by the National Unity Government. We found an alternative military to replace the old one.

But in international news reports for the international audiences, who might have little knowledge of the background of Min Aung Hlaing’s brutal military, the phrase Tatmadaw is common. Using the military’s preferred term is helping the military regime’s propaganda by validating the junta and ignorantly accepting them as worthy representatives of Myanmar. It is far better for reporters to use Sit-tat.

Instead of the term “Myanmar military,” the most suitable term would be “murderous military,” which captures the true nature of Min Aung Hlaing’s army. It is also important that reporters add an explanation describing how the military launched a coup and deposed the elected government, as well as how it is committing war crimes against the population.

I humbly ask international readers to make an effort to understand the current situation. And the first step in doing that is to use the correct terms for the military.

Desmond studies international development with a focus on peace processes and transitional issues.