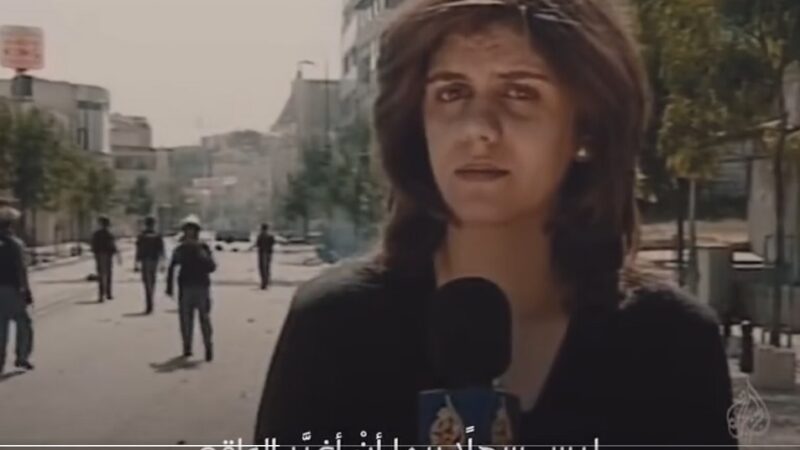 “It is not easy to change reality, but I was at least able to carry these voices to the world,” assassinated correspondent Shireen Abu Akleh said in a previous interview about her 25 years of reporting on Palestine. On May 11, she was shot dead by an Israeli bullet to her head, sending waves of grief and rage across those who followed the Palestinian cause. This is a screenshot from a video that went viral on Twitter.

This article was first published by Raseef22 on May 11, 2022. An edited copy is republished by Global Voices as part of a republishing partnership.

The news of renowned Palestinian journalist Shireen Abu Akleh's murder by a bullet to the head fired on May 11 by Israeli forces sent waves of grief and rage across the Arab world and beyond, amidst calls for an end, once and for all, to crimes committed by Israel against Palestinians as a whole, and journalists specifically.

Shireen's assassination in Jenin, in the occupied West Bank, while reporting the Israeli army's incursion into the city, was mourned by millions across the globe.

Shireen Abu Akleh was EXECUTED with a shot to the head by Israeli snipers while wearing her helmet & bullet proof vest that said PRESS on in.

How long will we continue remaining silent while our “allies” kill journalists for telling inconvenient truths?#شيرين_ابو_عاقلة

Eyewitnesses said that the Al-Jazeera correspondent was wearing a press vest and a helmet, in a strong indication that she had been targeted by sniping in the head in the visible part of the helmet — under the ear.

According to a reporter accompanying Shireen when she was shot, she was not only wearing a press vest but also a helmet.

The reporters were facing the Israeli snipers. There is no way they mistook her. They hit Shireen where her head was exposed in order to kill her. pic.twitter.com/W6KTeHwVZZ

In a video that went viral on Twitter, Shireen's colleague who was with her in the field, said:

I am shocked to hear of the death of Al-Jazeera journalist Shireen Abu Akleh, who was shot by Israeli forces in the occupied West Bank.

This appalling killing must be investigated and justice sought for her family. https://t.co/KTCc7zsV4T

In a previous interview, Abu Akleh said about the danger she faces while covering dangerous places, specifically during the Israeli invasion of the West Bank in 2002: “In difficult moments I overcame fear. I chose journalism to be close to people. It is not easy, perhaps, to change reality, But I was at least able to get that voice out to the world.”

“I chose journalism to be close to people. It might not be easy to change the reality but at least I could bring their voice to the world. I am Shireen Abu Akleh”. That sign off will forever be iconic. Rest in power and peace Shireen. pic.twitter.com/WKFjypywEa

One of the moments in which she had the most impact, Shireen recounted, was her visit to Ashkelon Prison where she saw the condition of Palestinian prisoners, some of whom spent more than 20 years behind bars.

‘Eyes on the truth’

On her Facebook page, Mandour wrote: “Israel killed Shireen Abu Akleh because Shireen harmed it. From the first day she stood in front of the camera and carried the world to the heart of Palestine, she launched the plan to assassinate her. Over the decades and wars, from the intifada to today, we trusted Shireen, and we walked with her on the hills and between the trees, we conquered the neighborhoods of the villages and we swept the streets of the cities with our eyes. We saw Palestine through her, and we saw the occupation closely, eye for eye, with her.”

She concluded: “Her assassination is a shock, of course, but it is the result of an organized crime. It is not by accident or by mistake, but by a decision and an effective action. Israel killed one of the heroines of Palestine.”

US seeks ‘close partnership’ with Marcos despite ‘challenges’

Apple spring product launch scheduled for March 8: What will be revealed?