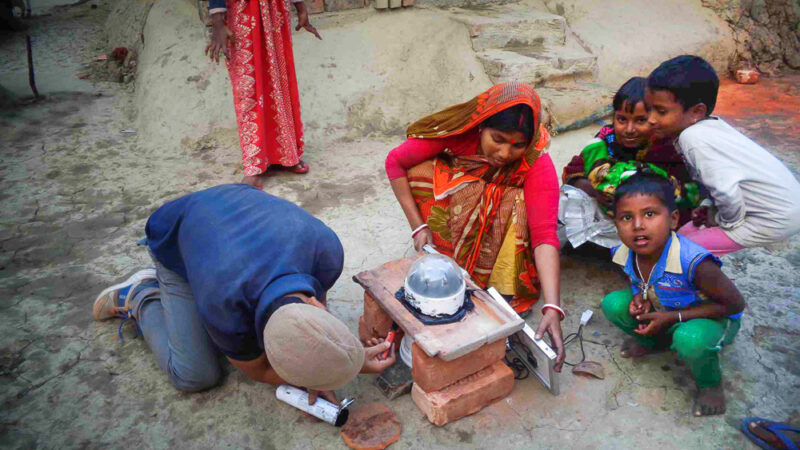 A woman is being trained on how to install and use MSD in Tripura’s Bikrampur village. Image credit:NB Institute of Rural Technology (NBIRT)  Used with permission.

For 98-year-old Usha Rani Das, in the Northeast Indian state of Tripura, electricity in her home has been a rare luxury for most of her life. Her native village of Bikrampur in the remote West Tripura district, though connected to the conventional grid power, would be routinely plunged into darkness for long, uncertain periods. 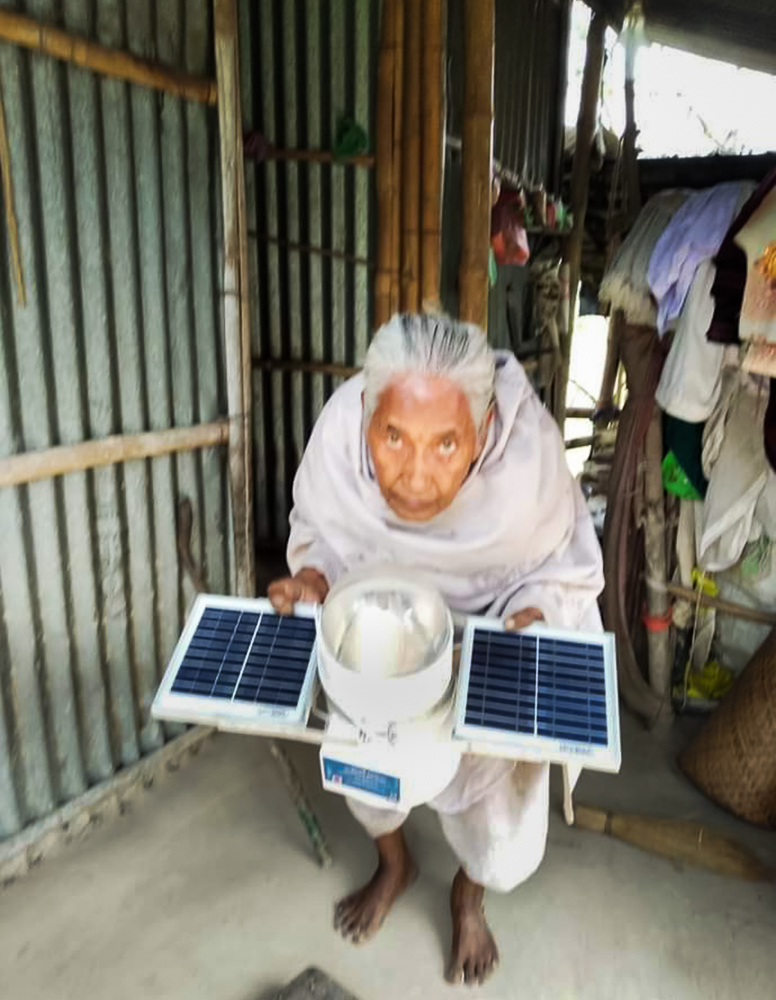 98-year-old Usha Rani Das from the remote Bikrampur village of Tripura flaunts a micro solar dome that has brought light to her life. Image credit: NBIRT. Used with permission.

But the nonagenarian now happily enjoys uninterrupted light in her home. The technology that could make it happen is the micro solar dome (MSD) powered by the abundant sunlight in her village.

American Airlines offering pilots raises of up to $64K during labor crunch: report

“All my life light to me had mostly been kerosene lamps that got lit after sunset, but now my home looks so bright,” Usha told to Global Voices in a phone interview.

The Indian government’s Department of Science and Technology (DST) funded these domes as part of a program to bring light and electricity to some of India’s remote rural households. Each unit costs 2,000 INR (about USD 26), though the DTS subsidises 1,500 INR (USD 19), leaving the beneficiaries on the hook for 500 INR (USD 6) per unit.

The local panchayats (village councils) prepared the beneficiary list, identifying families in need based on their economic status and power access.

This unique lighting system is the brainchild of India’s “solar man” Santipada Gon Chaudhuri. Weighing just 350 grams, the device provides light both during day and night. It is installed on the rooftop of the beneficiary’s home and integrated with two 3-watt photovoltaic panels on either side that capture sunlight to convert into electricity. 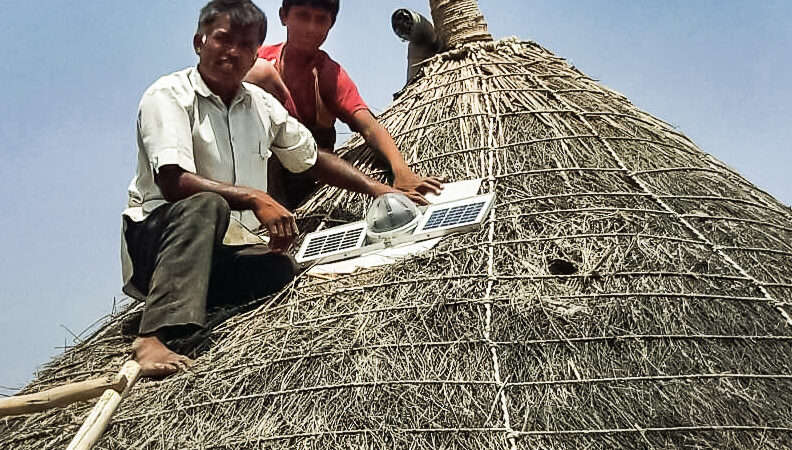 A micro solar dome (MSD) typically installed on the roof of a beneficiary home. Image credit: (NBIRT). Used with permission.

Though all villages in India are connected to the power grid in some way, not all households enjoy power. Over 20 percent of people in India currently have no access or limited access to electricity, due to erratic or low-quality supply.

“This is because such households either cannot afford to pay electricity bills and thus not opted for connections or they exist in such isolated locations of their villages, where it is expensive to reach, maintain or repair transmission/distribution lines,” said Gon Chaudhuri in an interview with Global Voices. 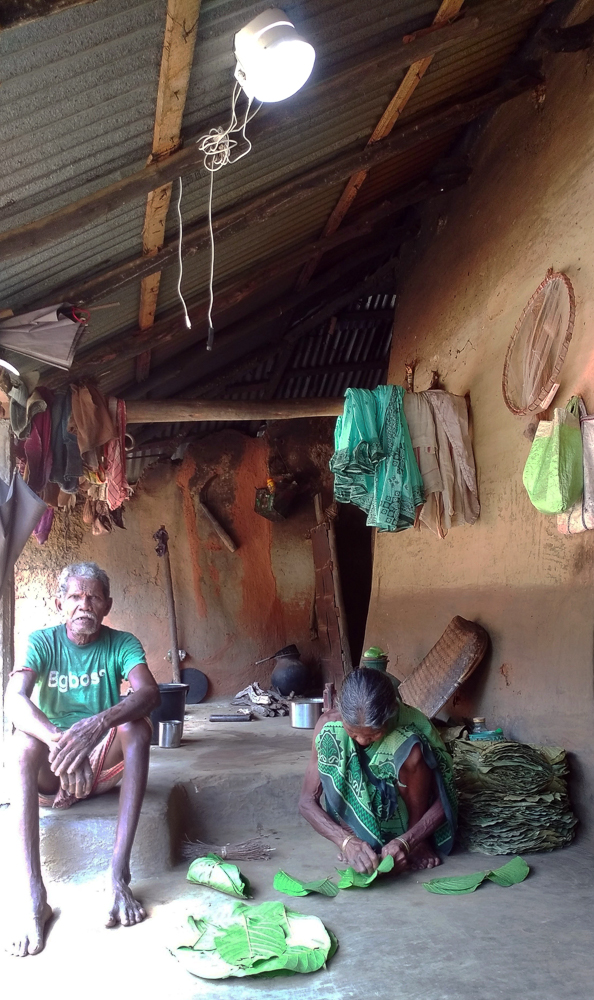 Each MSD device has two transparent hemispherical acrylic domes. The upper dome captures sunlight that passes through a hollow tube-like structure called a “sun tube”. Its walls are coated with highly reflective material that can light up a dark room during the daytime.

The lower dome is fitted with LED lights for night use. Lighting is provided by a 7.4 Volt (V) lithium Ion battery of 4.4 Ampere hour (Ah) capacity that is charged by the two solar panels attached to the roofs of the houses. The lighting system of 3-Watt capacity (equivalent to the incandescence of a 40-Watt bulb) can run for about six hours.

The system also has a USB port for charging mobile phones. Alternatively, the system can also be connected to a conventional grid for night lighting.

After the innovation of the product by NBIRT, the role of IIT was “socialisation of the product with the beneficiaries”, said Priyadarshi Patnaik, to Global Voices in an e-mail interview. Patnaik is a professor of Humanities and Social Sciences, heading the IIT research team on MSD. 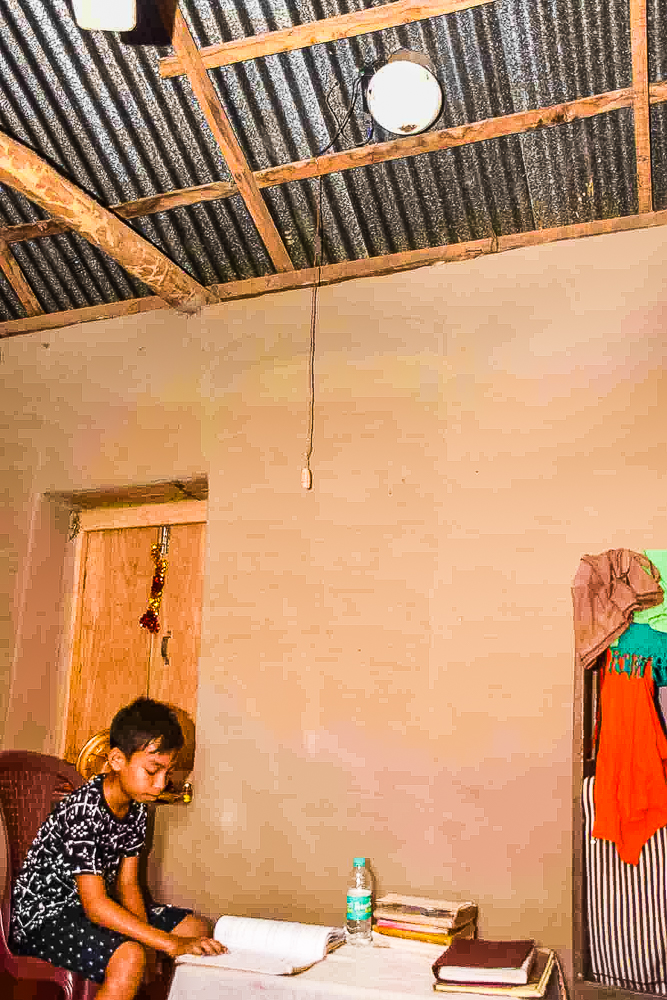 The team trained the beneficiaries on how to use the device and explained how it can help them meet their needs. “The purpose was to deploy and explore responses for identifying strategies that could make the MSD acceptable in diverse contexts/cultures”, explained Patnaik.

Such exercises have helped change the lives of villagers such as Bahamuni Murmu, from remote forested Surgidanga village in West Bengal’s Bankura district, who can now work after sunset and increase her income. “With the forest produce I collect during the day, I make brooms or weave mats under the light in the evening that I can sell off the next day”, she told Global Voices over the phone.

Sukumoni Tudu, from Kharujhor village in the same district, on the other hand, is delighted to see her children study till the late evening hours, under the light of MSD. “We can also charge our torch or even have a 1-W LED light additionally in our home, through the USB port for various spot activities”, she said.

The technical team also added innovative modifications to meet the villagers’ needs, such as including an FM radio within the system. This was especially useful for disaster-prone villages of coastal Odisha, which helped them to get advance warnings on weather and prepare for emergencies, informed Patnaik. 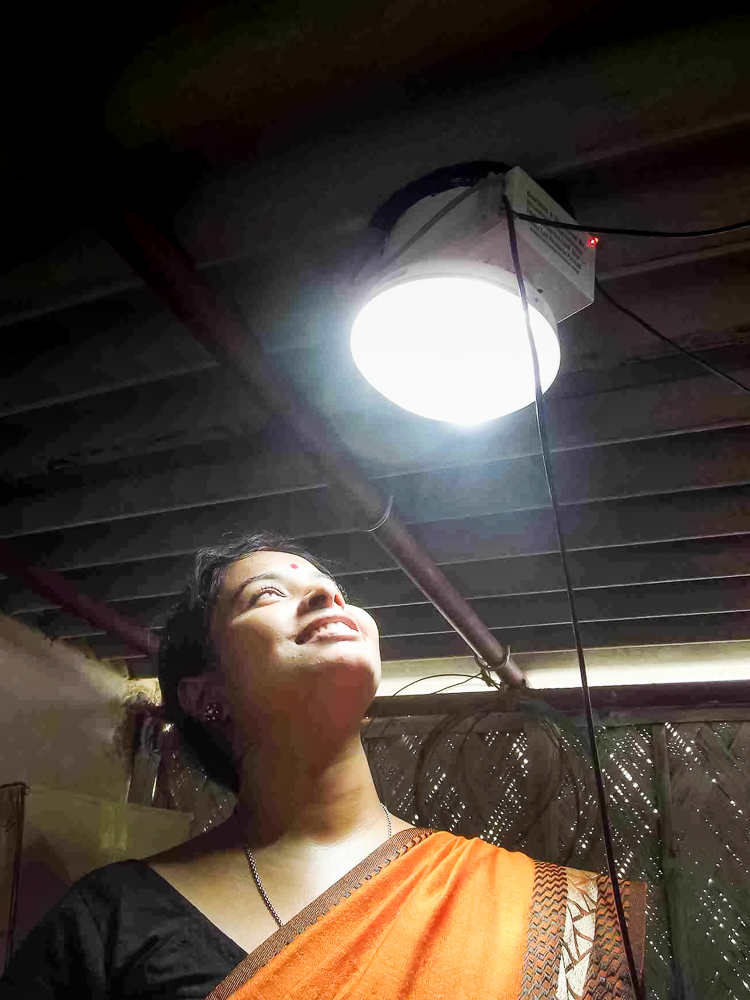 The Micro Solar Dome is the world’s first hybrid solar lighting device. It uses a combination of passive energy (direct sunlight) and active energy (solar energy converted to power). Each unit of the system cuts down at least 27 kilos of greenhouse emissions per month, explained Chaudhuri.

NBIRT has trained local communities on the upkeep and maintenance of these units. According to master trainer Tanmay Singha Mahapatra. Village youths, with the help of experienced local non-profits, have been taught how to install the units and deal with minor malfunctions.

“MSD however has very low maintenance. Only regular cleaning of the domes and the PV panels is required” said Mahapatra. While the battery lasts for about 18 months, solar PV panels have a lifespan of 25 years.

Meanwhile, organisations such as the International Solar Innovations Council (InSIC) are working out further innovations with MSD. In a project locally called “Shaurya Radhuni” (Solar cook) the capacity of the battery is raised to 7Ah and the device is connected to a blower fan.

This system is integrated into a fuel-efficient smokeless cookstove. “Power from MSD apart from lighting up the space also operates the fan which makes cooking faster and less polluting”, said Richik Ghosh Thakur, Board member, InSIC in an interview over the phone.

The interviews in this story were conducted over the phone, by e-mail and in person during research work in May 2022.

American Airlines offering pilots raises of up to $64K during labor crunch: report

In June, hundreds of Allied Pilots Association pilots picketed in front of the New York Stock Exchange, demanding for better...

TikTok seeks to calm US lawmakers’ fears about data security

Last month, TikTok said it has completed migrating information on its US users to servers at Oracle but it still...