Syria’s Samar Haddad: ‘Books are freedom and reading is what frees us’ 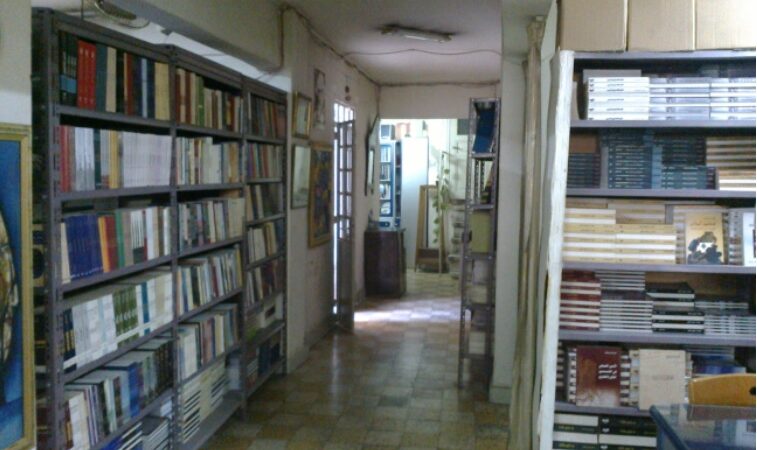 This article was first published by Syria Untold on April 22, 2022. An edited version is republished as per an agreement with Global Voices.

At the helm of the prominent Dar Atlas publishing house in Damascus is Samar Haddad. Since the 1950s, Dar Atlas has published, among other things, what Haddad describes as “beautiful books” both inside and out, despite wars and crises.

In an old building just off of al-Abed Street in Damascus, Samar Haddad sits in her office, speaking of people who have come and gone and whose ghosts remain here, adrift. She inherited Dar Atlas from her father. But how will Dar Atlas stay afloat? Syria Untold discusses this and other issues with her.

Syria Untold (SU): Amid the economic crisis in Syria and the rise of ebooks, are books — in the physical sense — dying out?

Samar Haddad (SH): This is a question that has been asked for two decades. Imagine! Books should have died by now. But they haven't. Instead, they always return as young as ever. The book transcends itself to become a revelation. Something that the world sees and reads.

For example: physical book fairs still exist. Each fair has dozens of  booths, and each booth hundreds of books. That’s just one example of how the physical book is alive.

Physical books are supposed to be the complete transcendence of the bitter, cultural reality we live in. Books are freedom and reading is what frees us. The true publisher, whether small, medium or large, is the freedom fighter of our age. As a publisher, I’m a resistance fighter in this age of consumerism.

And so, the physical book isn’t dying,” I still say: “No it isn’t.” That is, so long as there are people demanding physical books, people who take into account the clear difference⁠ — for them ⁠— between the physical books both good and bad, and electronic books.

We strive for perfection to the extent that we can, for something resembling intellectual satisfaction and beauty. Nobody works like this. Very few Arabic-language publishers work with this approach, one that has respect for serious readers. Despite our method, our sales inside Syria are at a loss. That’s because we are, first and foremost, a Syrian publishing house and since the beginning we have been oriented towards Syrian readers.

I said “loss” because we are unable to increase the prices of our books. The reason is, simply, that people are dying of hunger. We try to compensate for these losses through our book exhibitions abroad.

In short, I don’t agree with the idea that physical books are dying, regardless of how deeply our lived reality deteriorates.

SU: Tell me about the diversity of the books you publish. What are these books’ histories in terms of writing, printing and publishing?

SH: The distributor or the publisher has no right to act on behalf of the reader, to define what the reader wants, likes, doesn’t want and doesn’t like.

I choose the bibliographic catalogue that suits me, and I face difficulty from the censorship officers in obtaining the rights to publish books without deleting or adding certain parts.

We’re thinking about upcoming projects to produce. We’re working on a book called The Encyclopedia of Arabic Calligraphy with the help of calligrapher Mouneer al-Shaarani, and another book of excerpts from Ibn Arabi. This book has also been translated into other languages (French, English and Spanish) and includes artwork and an introduction by Mouneer. We also have four books translated into Arabic from German, Catalan and English.

SU: You seem to imply that the goal in book publishing is not to profit. Is the purpose, then, to seek knowledge? How is it possible to continue towards this goal without profit?

SU: Are the prices for books outside Syria different that those you sell inside Syria?

SH: Yes, very different. We participate in at least eight book fairs each year. The income we gain from sales at those events outside Syria helps us to stay afloat here. We also rely on grants to translate books from various languages into Arabic as part of what you could call “cultural promotion”: promoting French, Catalan, Spanish and German, for example. These grants fund at least 70 percent of our project.

SU: It’s rare to hear the owner of an organization speak more about cultural and intellectual values than about profits and income.

SH: Exactly. I concern myself with culture before profit-making as a publisher. Publishing is, in the end, a business venture, and lacking cultural concerns does not negate its sanctity. If you wanted to, you could turn your focus more to the business side of things and make great profits.

SU: Do you worry that the books Dar Atlas translates into Arabic are culpable of linguistic “betrayal” via translation? As a publisher, are you concerned about the translated text matching the original? As you know, translation serves to welcome the stranger; translation is listening, dialogue and interaction with this other. Do you view translation in this framework?

SH: Of course. Without a doubt, I try to achieve a translation that is true to the original to the highest degree possible. However, there can be no “betrayal” in a true sense. Rather, there are certain choices that the translator deems appropriate in context.

SU: Do these choices stem from the nature of translation itself, or from the translator’s personal perspective?

SH: From the requirements of the text, or the structure.

SU: Does this apply to all translators?

SH: No. There is no translation that is 100 percent perfect. Rather, there is a set of ethics for translation. For example:

Nabil al-Huffar is among the most important translators, both in Syria and abroad. He translates from German to Arabic. His translations have, in essence, the “perspective of distance,” a beautiful phrase that I borrow from a wondering poet to describe Nabil’s moral and aesthetic expressiveness.

Finally, I read a text by Amin Maalouf in the original language and I noticed the difference: The translated text doesn’t have the same degree of beauty and luster as the original.

Maybe we are lucky to have translators with good knowledge of language, transmission, culture and interaction with others.

SU: Do you feel any disappointment at the current cultural scene in Syria?

SH: Of course. What can you expect amid this reality we’re living through?

SU: I apologize for this next question, but I must ask: Just as you preserved your late father’s mission⁠ of keeping Dar Atlas going⁠, is there someone who will keep that same mission going when you’re gone? What is the eventual fate of Dar Atlas?

SH: There is nobody, and no heir. I’ve been thinking about this for a long time.

There are several options. I could hand over the publishing house to a competent and honest person so that it stays afloat. However, there’s nobody I can hand it to from my own family, as my sister and I are both unmarried. I have a brother, but he’s not involved in Dar Atlas at all. The whole rest of the family is in the diaspora, given that we are of Palestinian origin.

Yes, this issue bothers me, and I’m thinking of an alternative plan. I don’t know yet. I haven’t yet started the process of handing over Dar Atlas to anyone, as I’m still able to manage everything and follow through on projects.

The new poll showed that 81% of Americans believe in God, which is a six-point drop from 2017. Getty Images A new...

Why Team Biden might be purposefully grinding down the middle class