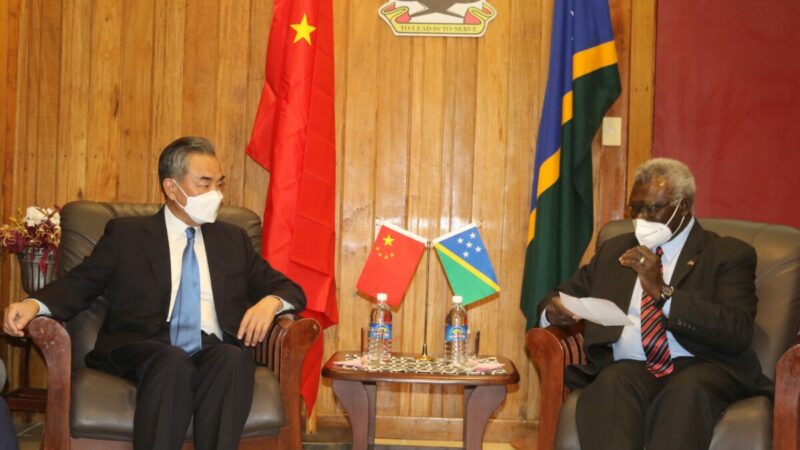 Solomon Islands Prime Minister Manasseh Damukana Sogavare met with China’s State Councilor and Foreign Minister Wang Yi at the Prime Minister’s Office in Honiara, the country’s capital, on May 26. However, Solomon Islands journalists have criticized officials for seemingly imposing press restrictions during the visit and failing to offer adequate information about the meetings or policy agendas.

The Solomon Islands was the first stop for Wang Yi, whose Pacific tour covering eight countries has gained wide attention in the region.

Understanding the damaging effects of Russian propaganda against NATO and Kosovo

It was only three years ago that the Solomon Islands broke diplomatic ties with Taiwan and recognized the People’s Republic of China. For Taipei, this follows a steady loss of diplomatic presence: In the past five years, five countries in Latin America switch their support to Beijing. Taiwan now maintains full diplomatic relations with only 14 countries.

Wang Yi arrived in the archipelago on May 26 and has already signed several agreements expanding cooperation between China and the Solomon Islands on issues relating to trade, environment, sports, and security. Prior to the visit, there were reports that a leaked security draft deal between the two countries could lead to the installation of a Chinese military base in the Solomon Islands. This was denied by both governments, although it was revealed that China is interested in building a police training facility in the Solomon Islands.

The possibility of a Chinese military basis has become the focus of much debate, given that the archipelago nation currently has a security deal with Australia. Beijing and Canberra have engaged in a long diplomatic stand-off and are competing for influence in the Pacific and Antarctica. Observers also point out that the political balancing act could inspire other governments to play Beijing against Washington in a region that the US also sees as key to its own security, thus having large global repercussions.

Naturally, local journalists have many questions about the rumored security deal and the scope of the other agreements that the two countries will sign. But local journalists criticized the lack of transparency around the visit and the restrictions imposed during a press forum organized by the Ministry of Foreign Affairs. Some journalists complained about not being able to effectively cover Wang Yi’s arrival:

#media outside airport waiting for 🇨🇳 Foreign Affairs Minister's arrival in #Honiara Wed 11, 12ish at night. All we want are to take pictures & videos of this historic occassion. Next time we hope they'll give us a good spot to get good pics & vids too @solsmasi @lisaosifelo pic.twitter.com/JLgqk97wSw

The Media Association of Solomon Islands (MASI) also questioned why some local journalists were prevented from raising questions during the press forum of Wang Yi and Solomon Islands Foreign Minister Jeremiah Manele:

MASI called on its members to boycott Press Event by 🇨🇳🇸🇧 because it sees no logic for them to attend. Only selected local media orgs given credentials to attend. MASI says no to discrimination. All media must be allowed to do their job without fear or favor & must ask questions pic.twitter.com/NfsbdLtojz

Journalist Dorothy Wickham, who is also a board member of MASI, explains why local media groups have raised the alarm over the news coverage restrictions:

Board Member @DorothyWickham enlightens why MASI called for a boycott on the official press event during the visit of China's Foreign Affairs Minister to #Honiara 🇸🇧 pic.twitter.com/kOgXQ4ujI7

On the other side, a government representative challenged the idea that journalists were unable to properly attend the press forum:

Would like to clarify to the international media that 🇸🇧 and 🇨🇳 Foreign Ministers press session that was said to be boycotted, was covered by national journalists. It is sad to see those who wish to tarnish the image of 🇸🇧 do so at the expense of who we are as Solomon Islanders

The Media Association of Vanuatu has released a statement expressing solidarity with their colleagues in the Solomon Islands. “Not allowing the Media to freely demand answers from Government and the Chinese delegate is a slap to the principles of Freedom of Information and democracy,” the group stated.

The International Federation of Journalists has warned that the “restriction of journalists and media organizations from the Chinese delegation’s visit to the Solomon Islands sets a worrying precedent for press freedom in the Pacific.”

Understanding the damaging effects of Russian propaganda against NATO and Kosovo

Mustafa Xaja from Kosovo in 1999 and 2021. Images based on screenshots from a famous photo taken during the Kosovo...

A screenshot from the AFP News Agency video report. The theme of this year's Pride March in Turkey was “resistance.”...

Filming for the rights of the Papuan people and land

Screenshot from the film ‘Perempuan Di Tanahnya‘. Source: YouTube This edited article was published on April 21 by WITNESS Asia,...