The fall of the House of Arslan: How a Lebanese political newcomer ousted a dynasty 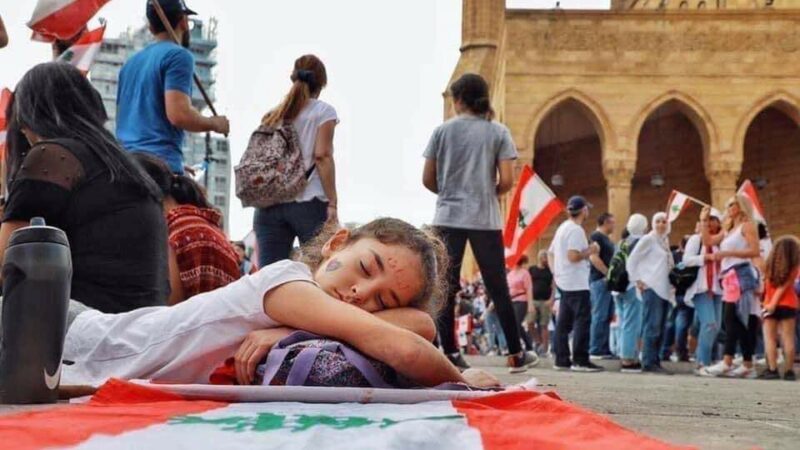 Lebanon's 2019 protests have brought in several political changes, including political newcomers who managed to break older sectarian-based politicians’ hold on parliamentary seats they've long dominated. The image, of a participant in the protests, was captured by Freimut Bahlo, is downloaded by Wikimedia Commons and used under Creative Commons Attribution-Share Alike 4.0 International.

On May 15, 2022, Lebanese voters cast their ballots in the first parliamentary elections to be held in the country since the Beirut blast leveled the eastern half of the capital in August 2020. Since then, the nation, mired in an economic crisis the World Bank has characterized as one of the world's “most severe crises episodes globally since the mid-nineteenth century,” has sought constructive means of ending its political and economic stalemate.

Defying expectations, voters enabled political newcomers associated with the October 17 uprising, which rocked the country at the start of its economic crisis in 2019, to nab a historic 13 seats from Lebanon’s traditional sect-based parties. Many regard the victory as a seismic shift in the politics of a country long dominated by corrupt sectarian elites—a loosening of sectarian politicians’ hold on Lebanese voters amid mass disillusionment with Lebanon’s sect-based political order.

“Elections are over. Detailed results are quite informative & show the potential of an organized, non-sectarian alternative in Lebanon. Our votes are spread homogeneously across regions & sects. Given how sectarian our society still is, this is an achievement by itself.”@MichelHe pic.twitter.com/agkYNqCosj

Opposition candidates broke through in a number of sectarian bastions.

This is the kind of intimidation non-sectarian reformist political parties trying to campaign in the parliamentary elections face in Lebanon. Candidates from Beirut Takawum got yelled at and intimidated by a group of pro-Hariri men when trying to distribute fliers in Tarik Jdideh pic.twitter.com/wCSy0jhvkX

The list, "We United For Change," won *3 seats* in total in a major breakthrough for independents, campaign manager said.

The Arslans, who claim descent from the Lakhmid kings of ancient Iraq, were heavily involved in the politics of Mount Lebanon from the 1800s through the modern era. Prince Talal Arslan’s father, Prince Majid Arslan, played an important role in the tiny Mediterranean country’s independence from France in 1943, and was a fixture in the Lebanese parliament of the post-independence era, holding the Druze seat in Aley district from 1931 until his death in 1983.

“I wouldn’t say Marc Daou ousted the Arslans,” Makram Rabah, an author and lecturer in the Department of History at the American University of Beirut, told Global Voices. “The Arslans ousted themselves, for a number of reasons. First, Prince Talal Arslan failed to understand that many Druzes were no longer under the sway of traditional political parties post-October 17. The younger generation especially chose to take a stand, and even the older generations joined the kids in voting for change.

“Second, Prince Arslan was completely oblivious to the fact that by aligning himself so openly with Hezbollah, he was alienating and antagonizing the Druze electorate in Mount Lebanon, which, back in May 7, 2008, took a fierce stand against the militant Islamist group’s invasion of its towns and villages”.

In parliament's first session today, @DaouMark, one of Lebanon's 13 independent MPs, went in with a poster showing the faces of the Beirut port blast victims.

Independents MPs marched from port to parliament — a symbolic move to demand justice for the victims. pic.twitter.com/1iDResQOMg

Bilal, a native of the Druze city of Choueifat who asked not to be called by his real name for security reasons, concurs. “In addition to his political alliances, which many people found alienating, and his feudal title, which many people found outdated, Prince Talal Arslan failed to provide any reason for his constituents in Choueifat and elsewhere in Aley district to vote to re-elect him.”

But not everyone agrees with this assessment. “If we’re going to denounce Prince Talal Arslan for allying with Hezbollah, why don’t we denounce Walid Jumblatt for allying with the Lebanese Forces?” demanded Bahaa, an Arslan supporter in Choueifat, referring to the de facto leader of Lebanon’s Druze community and the Arslan family’s main Druze rival.

Jumblatt’s Progressive Socialist Party’s election alliance with the Christian Lebanese Forces proved controversial due to the two groups’ bloody history of conflict during the Lebanese Civil War, which took place in a series of phases between the leftist, pan-Arabist, and pro-Palestinian Lebanese National Movement on the one hand, and the mainly Christian, anti-Arabist Lebanese Front on the other. The war lasted from 1975 to 1990 and left an estimated 120,000 people dead and thousands more injured.

Prince Arslan's fall was long in the making, dating back to the 2005 Cedar Revolution and the end of more than decade of Syrian occupation, according to Dr. Rabah. “The beginning of the end for the Arslans started with the evacuation of the Syrian army from Lebanon in 2005,” he says. The Arslans have been strong allies of the Syrian state. “However, it was Iran's growing influence in Lebanon at the expense of pro-Syrian elements that ultimately delivered the killing blow,” not only to Prince Arslan but also to other pro-Syrian bastions such as Druze politician Weam Wahhab and Eastern Orthodox deputy speaker of parliament Elie Ferzli.

Marc Daou’s victory in Aley district, however, still constitutes a triumph for the October 17 uprising. “Druze citizens, including pro-Jumblatt ones, were heavily involved in the uprising,” says Dr. Rabah, the most notable example being Alaa Abou Fakher, one of the uprising’s first martyrs who lost his life when an army officer shot him dead as he attempted to block a road in the coastal town of Khaldeh south of Beirut.

Certain of Jumblatt’s victory, pro-Jumblatt voters may have also mobilized to oust Prince Talal Arslan by voting for Marc Daou. “While I don’t think that it was an orchestrated movement by the pro-Jumblatt camp, Jumblatt did not exactly frame the pro-reform opposition as enemies, which ultimately helped them campaign and reach voters,” explains Dr. Rabah.

But at the end of the day, Dr. Rabah says, it was Prince Arslan’s failure to correctly gauge the political atmosphere of the Druze community in the aftermath of Lebanon’s dramatic multidimensional collapse that cost him his seat. “He lost his seat because he did not understand how the Druze were thinking at the moment. Maybe he can make a comeback in future elections if the electoral law changes in his favor, but he is a weak politician compared to Walid Jumblatt.”

And while it’s still too early to predict if the October 17 uprising has become an institutionalized political force on Lebanon’s domestic political scene, Dr. Rabah believes there’s no doubt that Marc Daou and the new pro-uprising MPs will leave their mark on Lebanese political institutions, or at least try to do so. “The problem isn’t that the Lebanese are not able to drive change democratically,” he says. “The problem is that many traditional Lebanese political factions don’t really care about checks and balances, or about the democratic process.