The Gezi protests were led by riffraff and sluts, according to president Erdoğan 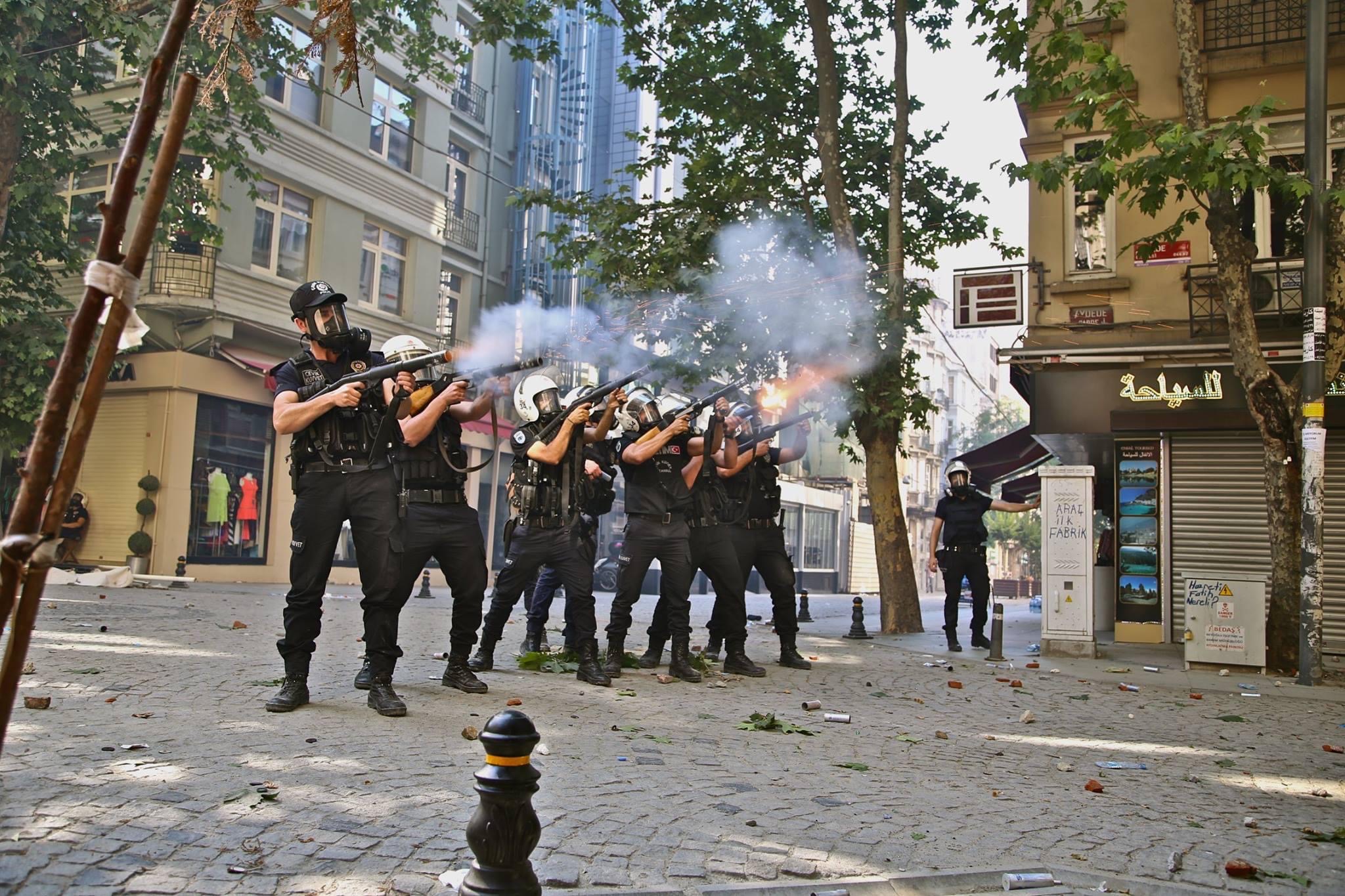 Police fire tear gas at protesters in Istanbul during the Gezi Park unrest in 2013. Photo courtesy of Arzu Geybullayeva.

Turkish police clashed with protesters on May 31 who were planning to mark the nine-year anniversary of Istanbul’s famous Gezi Park protests.

In 2013, scores of protesters descended on Gezi Park, situated in the heart of Istanbul’s Taksim square, for days on end, joining already a large group of environmentalists, rights activists, and other civil society representatives camping at the park and defending it from demolition. But the Gezi protests quickly turned into something much bigger than just a handful of environmentalists wanting to protect one of the last remaining green spaces in the heart of historic Istanbul.

The Gezi movement became perhaps the largest act of civil disobedience in Turkish history, an unprecedented affront to the government controlled by the conservative Justice and Development Party (AKP). This year, on the ninth anniversary, police surrounded the square where according to media reports, some 170 people were detained. Istanbul governor’s office said, “the protests were unauthorized,” reported Reuters.

Caught between riffraff and sluts

Speaking at the party meeting on June 1, President Recep Tayyip Erdoğan slammed those who attended the Gezi protests calling them “tramps.” In 2013, Erdoğan notoriously claimed activists had stormed a local mosque and drank beer inside. That allegation was quickly rebuked by the then-muezzin of the mosque, who was promptly replaced and reassigned to a mosque on the outskirts of Istanbul as a punishment. 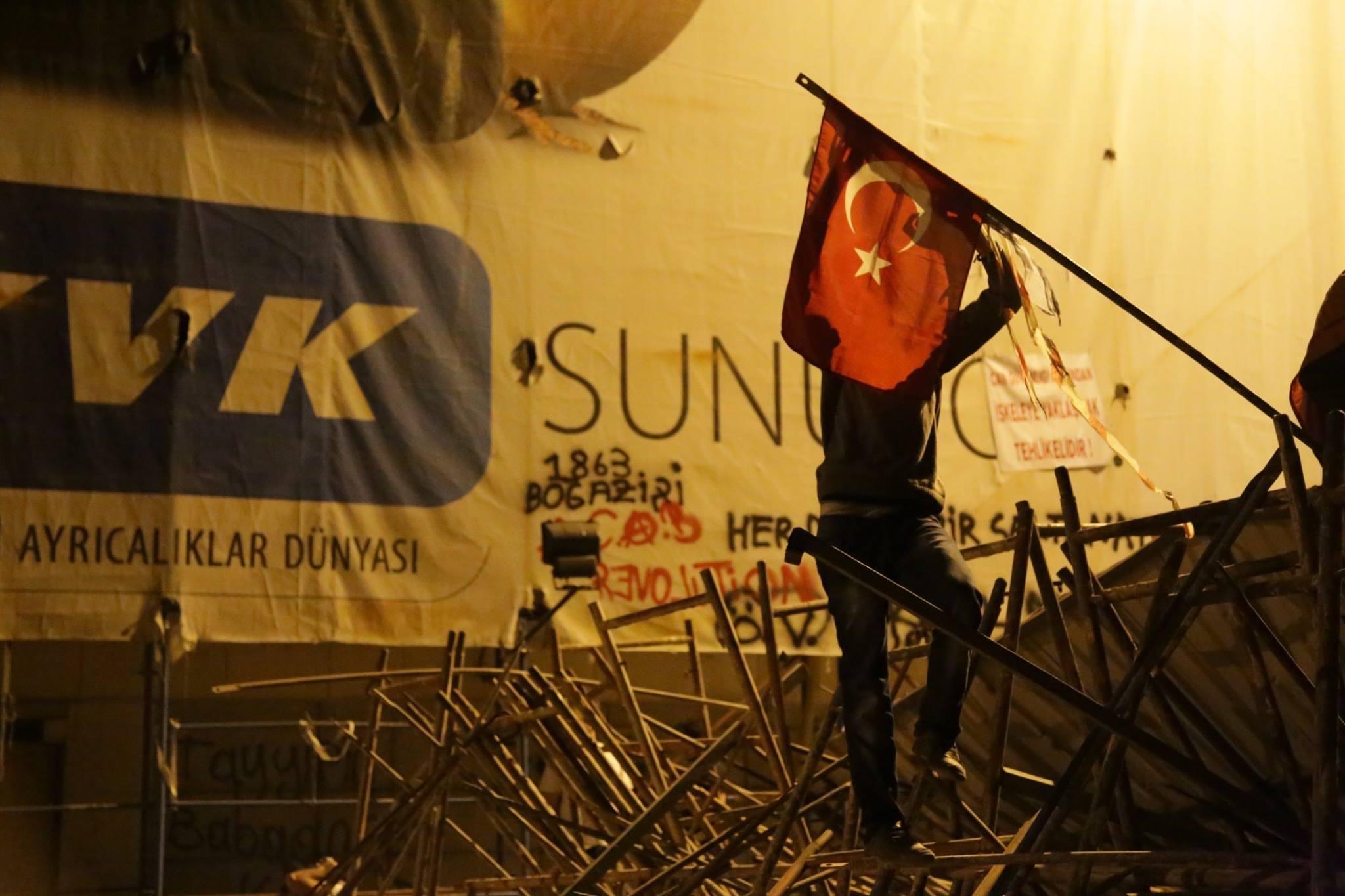 Protester prompts the flag of Turkey on the barricade during Gezi unrest in 2013. Photo courtesy of Arzu Geybullayeva.

In his address, Erdoğan also called the protesters “corrupt” and that they were “sluts,” adding, “We know who were behind the Gezi events where public buildings, police vehicles, ambulances, businesses, civilian cars, municipal buses, streets, and parks were burned down.”

Erdogan, speaking on the anniversary of the Gezi Park protests, on the protesters: “Those terrorists and thugs defiled the inside of a mosque with beer bottles. They are rotten, they are sluts." pic.twitter.com/S7t6rQOtK0

On Turkish Twitter, the Turkish word for a slut, #surtuk, became a trending hashtag:

Erdogan called the #Gezi protesters #surtuk (means bitches/mawks in English), which led to an outcry on Turkish Twitter today.
Hate crimes against dissident groups are incited by such political hate speech as we found in a recent study https://t.co/SZFM81Cbzx #Gezi9yasinda https://t.co/4xsOKaErW7

The ruling Justice and Development Party takes insults seriously. According to Article 299 of the Turkish Penal Code, it is illegal to insult the president. The accused can face up to four years behind bars. Students, artists, journalists, lawyers, and average citizens have been prosecuted or faced trial for insulting the president. According to the Ministry of Justice, General Directorate of Criminal Records and Statistics, 36,000 people were investigated for allegedly insulting the president in 2019 and 31,297 in 2020. In comparison, only four people were investigated under the article in 2010.

Tweeting about the president’s most recent insult against his constituents, journalist Burcu Karakas said:

The person who have launched more than 160 thousand probes on the insult charges, tells the citizens they are “sluts”!

In addition to name-calling and insults, the ruling Justice and Development Party government launched a crackdown against those it viewed as the culprits. Among them is Osman Kavala, a prominent philanthropist who was arrested in 2017 and sentenced to life in prison in April 2022. Among charges leveled against Kavala in 2017 were “attempting to overthrow the constitutional order” and “attempting to overthrow the government” over his alleged financing of the Gezi Protests in 2013.

In February 2020, Kavala was acquitted; however, hours later, he was accused of involvement in the 2016 coup attempt. Although he was cleared one month after this accusation, Kavala was kept in remand detention on charges of “political or military espionage.” Then in January 2021, his acquittal in the Gezi Park trial was reversed. However, during his February 2021 trial, the court combined the Gezi Park trial charges with the 2016 coup accusations, ruling to continue his detention.

At the time of the protests in 2013, the state rhetoric blamed the protests on external factors: the CIA, European jealousy around Turkey’s rapid development, unspecified foreign forces in cahoots with terrorists, the “interest rate lobby,” Twitter, and even Lufthansa airlines.

One of the main features of Gezi was the innovative approach to civil disobedience that the movement gave birth to. According to authorities, protesters such as the “Woman in Red” and the “Standing Man,” who garnered global media attention for their brave and creative stands against police oppression, were trained and recruited from abroad. 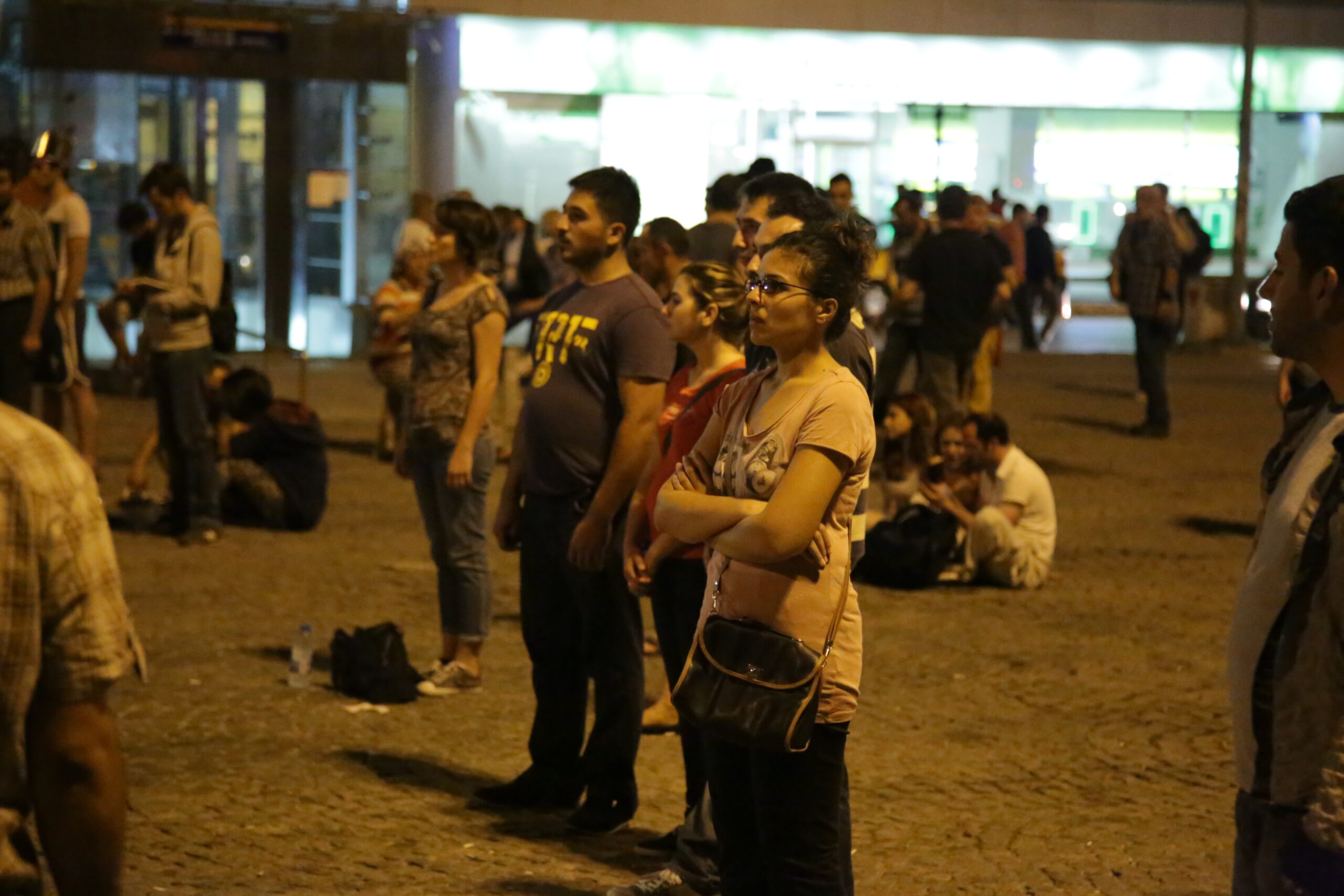 “Standing protest” quickly picked up among protest participants during the Gezi protest in 2013. Photo courtesy of Arzu Geybullayeva

But the Gezi movement spread and endured precisely because it appealed to a broad range of people dissatisfied with AKP rule. Rather than engaging with the protesters, Ankara doubled down, portraying them as enemies of the state.

Nine years later, little seems to have changed. Speaking from a podium on June 1, President Erdoğan held fast to state rhetoric that the Gezi was nothing but a period of “betrayal, shame and vandalism” in the country’s history.

But for the people of Gezi park and the wider public, it was the opposite. Emin Ozmen, who was among hundreds of thousands of Gezi participants, documented the uprising through photographs that were published by Magnum. He wrote that the protests were a “major turning point and challenge for Turkish democracy,” adding, “Gezi became the catalyst for a wider sense of awareness. It was a revolt against the increased authoritarianism of the system and the allegations of mass corruption inside the government.”

Nine years later, the awareness is greater than ever, with all eyes set on the upcoming 2023 general election. But whether President Erdoğan’s divisive comments will pave the way for change is yet to be seen.

America is being held hostage by loony demands