The most desperate response to the COVID-19 lockdown in China: ‘We are the last generation.’ 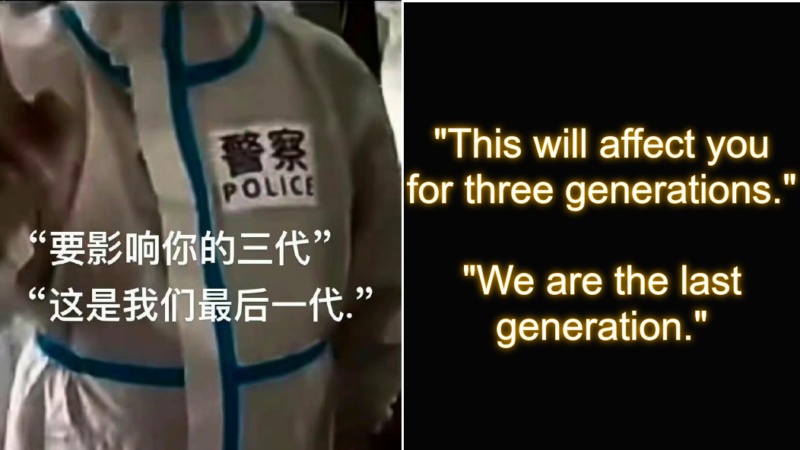 An image from a viral video in China

The threat of multi-generational punishment was commonly used during Mao Zedong's era. In this period, when a person was labelled a rightist or capitalist, their offspring would have to wear a label identifying them as an “enemy of the people” and they would face political and social ostracism.

The response of the young man shocked many as, instead of feeling threatened, he fought back calmly by suggesting that he would not have any offspring.

In Chinese culture, having no children is considered a curse — one that draws significant social stigma. But the young man’s openness around not having children has triggered echoes on Chinese social media. Many have used hashtags #ThisIsTheLastGeneration (#这是最后的一代), #WeAreTheLastGeneration (#我们是最后的一代) and #TheLastGeneration (#最后的一代) to make similar declarations and start discussions around childrearing amid political and social oppression:

Some are angry there is seemingly no respect for individual basic human rights and freedom. Although there have been calls to loosen the zero-COVID policy after Shanghai’s aggressive lockdown which resulted in widespread food shortages, riots, and censorship, Beijing has continued to insist on its pandemic control measures and vowed to fight criticisms of the country's epidemic prevention policies.

Against such a background, some interpreted the “we are the last generation declaration” as the most desperate resistance against tyranny. Chinese Law professor Zhang Xuezhong, for example, said on Twitter:

“We are the last generation, thank you!” This is a tragic expression loaded with despair. The person who said this had made a biological decision that they would not have offspring based on the judgment: We have been deprived of a desirable future. This is the strongest protest that the young man could possibly make against his era.

The interpretation is slightly different on Weibo. Many don’t see his statement as an act of political resistance. One popular comment pointed out:

There is no resentment, no resistance, no blind praise of other countries’ practices.

It is an expression of helplessness when one wants to be proud of his identity but is deprived of all his basic rights, an acceptance of his incapability of bringing change even though he had hoped for the better, a self-defence when he was threatened with the fate of his offsprings.

He didn’t even share any demands, protection requests, or agendas for change. He didn’t talk about the rights that had been taken away from him quietly, nor the black and white agreements that had been trashed. He didn’t advocate, nor protest. He only expressed his stance calmly as if he turned the dagger towards himself sadly in despair.

The Chinese government has been encouraging its citizens to have more children in recent years, particularly after a steep drop in birthrate in 2020. However, the effort has been in vain mainly because of the lack of public support.