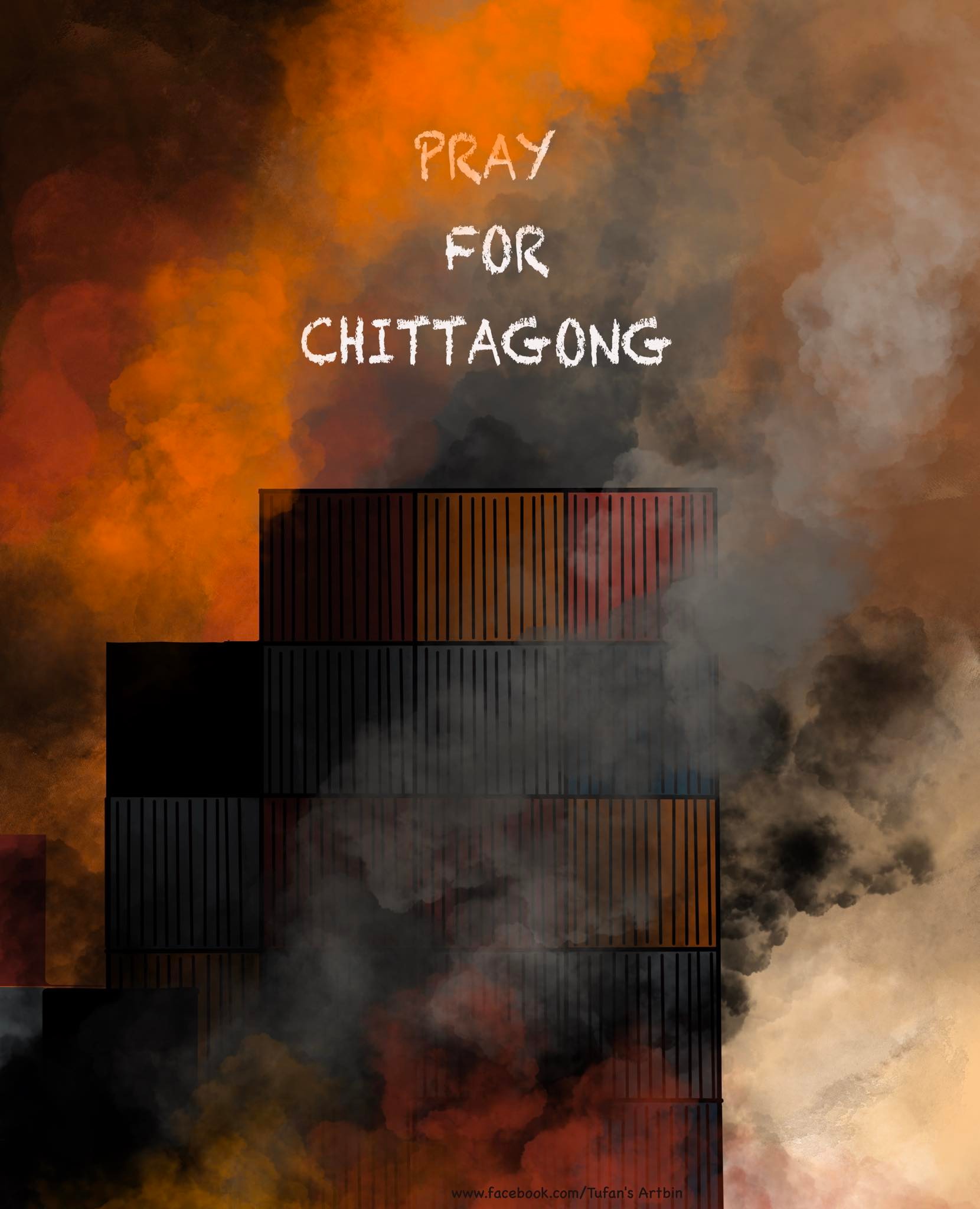 Our prayers are with the victims, their families and with the residents of Chittagong. Sitakunda fire in the eyes of artist Tufan Chakma. Used with permission.

Bangladesh is becoming a manufacturing powerhouse in South Asia, and the number of industrial fire incidents is also rising as industries cannot keep up with the growing requirements of safety and prevention.

A deadly fire broke out at a private container depot in Sitakunda Upazila of Chittagong district on the night of June 4, 2022. Firefighters were called and, while the first responders were putting out the fire in the containers, they were caught in a huge explosion, leaving many dead or injured. Soon after, more explosions rocked the place, causing a rain of fireballs.

The magnitude of the disaster was so huge that the firefighters and health facilities were struggling. But ordinary people, regardless of differences of opinions or parties, came forward to help the injured.

those pictures are not of any movie shooting. Picture after the horrific explosion at the container depot at Sitakunda in Chittagong on Saturday night. So far 42 people including 6 fire service personnel have been death and 400 injured in this accident.#PrayForChittagong pic.twitter.com/91pucw04SC

The depot contained a few thousand shipping containers laden with mainly readymade clothes for export, around 400 of which were damaged in the fire. According to the fire department, a few dozen containers containing hydrogen peroxide were the cause — the depot failed to notify the firefighters who first arrived at the scene that the chemical was present. The force of the explosions was so strong that the debris left marks a few kilometres away. At least 44 people have been killed so far, including 9 firefighters, and a few hundred people were critically injured — around 50 of them were rescue workers.

Located 30 km from Chittagong city, the BM Container Depot acts as an inland container depot (a centre for the transshipment of sea cargo to and from inland destinations) and covers an area of ​​26 acres. It was established in 2011 as a joint venture between the Netherlands and Bangladesh.

Ordinary people came out to help the victims

The major blast at the depot was so devastating that it shook the area for several kilometres around. It also took a heavy toll on the first responders — the fire-fighters, security personnel and lorry drivers at the compound. A 20-year-old worker who was live-streaming the fire-fighting effort also died in the explosion, with his phone camera going blank as he live streamed. Hundreds of burn victims were rescued in the next few hours, but there were no local medical facilities that could tend to a huge number of casualties. They had to be taken to the port city of Chittagong, 40 kilometres away. Doctors and nurses in different hospitals in Chittagong worked tirelessly to serve the injured. Over 400 injured were first admitted to the Chittagong Medical College Hospital (CMCH) alone, creating a chaotic situation as blood and medicine to treat them were in short supply.

Facing such a disaster, ordinary people came forward. People lined up in hundreds to donate blood at different hospitals. Some helped carry patients to the hospital by private transport and CNG rickshaws. A local organisation called Gausia Committee helped recover the remains of those who died from the blast site and bring them to the hospital for identification. The fire was so strong that many of those who lost their lives had to be identified by DNA tests. Hundreds of volunteers from the organisation were involved in evacuating the bodies from the blast site and transporting the victims to the hospital.

@BDRCS1 are cooperating with the fire service to recover the bodies of the fire at the container depot at Sitakunda in Chittagong and providing emergency medicines, medical services and working to establish contact with the families of the missing and injured people. pic.twitter.com/usvPypaGaV

Hundreds of students of Chittagong University (CU) rushed to Chittagong Medical College (CMC) Hospital that fateful night after learning about the shortage of donor blood, especially for those with a negative rhesus factor. They stopped at every bus stop on the way to the hospital, searched for rhesus-negative donors and conducted them to the hospitals. 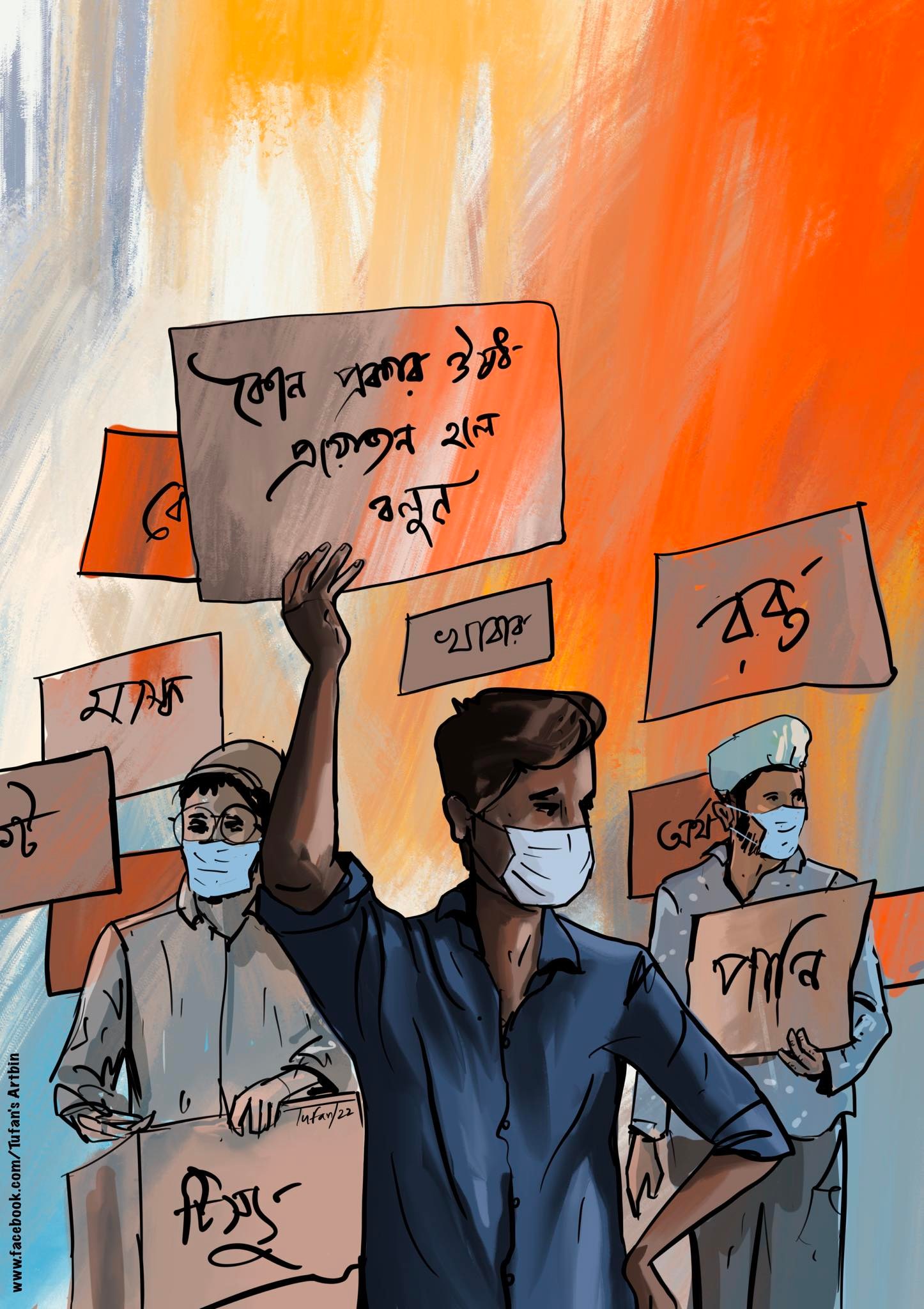 (Translation: If you need medicine, blood, food, money, please let us know) Indigenous young artist Tufan Chakma has portrayed via his painting the rise of ordinary people who came out in the night to help the Sitakunda fire victims. Used with permission.

Humanitarian group Bidyananda‘s charity effort — Mother and Children's Hospital — is located near the accident site. Immediately after the blast, volunteers from the organisation rushed to save the victims. Vidyananda's volunteers, doctors and nurses have been providing emergency services at the hospital for free since the accident. They are also providing the food and medicine as advised by doctors. Moreover, Bidyananda said on their Facebook page that they are planning to rehabilitate the injured after their recovery.

Bangladesh national cricket team captain Tamim Iqbal appreciated this gesture of different groups on Facebook and thanked the people who came forward in the time of crisis:

We as a nation proved once again that we can unite during a time of crisis. We could not fathom the intensity and extent of this unforeseen disaster but people came forward to help. Humans are for the humans. Forgetting a plethora of differences, we were with the victims, moving forward shoulder to shoulder, fighting the challenges. Thanks to these heroes, humanity won again.

My salute to all of them.

Praising those who came forward to lend a hand to the injured, Arifur Rahman Ripon wrote on Facebook:

The rickshaw, CNG, or other car drivers who brought the victims were not taking any money. Hundreds of blood donors were waiting to give blood, and hundreds of volunteers were waiting at pharmacies to donate medicine, food and water. People from all walks of life came forward in whatever way they can, regardless of party affiliation.
Ah, the humanity! Chittagong really deserves praise.

Tushar Abdullah, a media worker, described this as the true nature of Bangladeshis who stand by others in times of crisis. He wrote in an op-ed for the Dhaka Post: 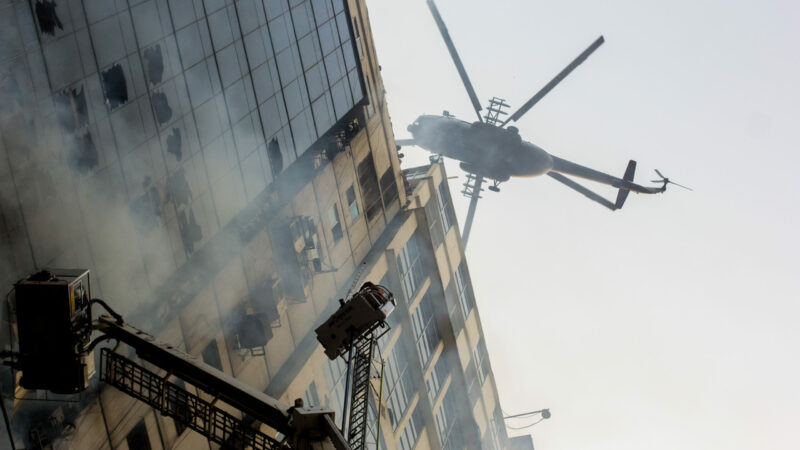 Many fires in Bangladesh are caused by electrical short circuits. It is believed that the FR tower in Banani, Dhaka also caught fire in 2019 due to an electrical fault. Helicopters were used in the rescue operation. Photo via Wikipedia by Jubayer1985. CC BY-SA 4.0.

Are incidents of fire become more frequent in Bangladesh?

A number of industrial fire disasters have occurred in the past decade in Bangladesh.

In 2010, a fire broke out in a chemical warehouse at Nimtali in old Dhaka, killing 124 people. In 2012, a fire broke out in a garment factory called Tazreen Fashion in Ashulia, killing 116 garment manufacturing workers. In 2019, 27 people were killed in a fire at the FR Tower in Banani, Dhaka. The list of fire incidents in the past decade also includes Tampaco Foils, Hashem Foods, the ferry MV Abhijan-10, and many more.

Between 2004 and 2020, 2,308 people died from thousands of fire incidents! When you add the number of casualties of other disasters like building collapses, road accidents, ferry disasters and other untimely deaths, Bangladesh can be named a valley of death.

Meanwhile, the fire service, after analysing the data on the types of major fire incidents and the investigation reports, said that 80 per cent of the fires were caused by electrical faults due to the use of low-quality electrical equipment. However, in the case of the Sitakunda fire, the main cause is said to be the presence of chemical containers containing hydrogen peroxide in the mix of containers of clothes. Hydrogen peroxide is not combustible itself, but it acts like an accelerant at high temperatures. Eight depot officials and workers have been sued by the police on the charges of negligence and mismanagement that led to the fire disaster.