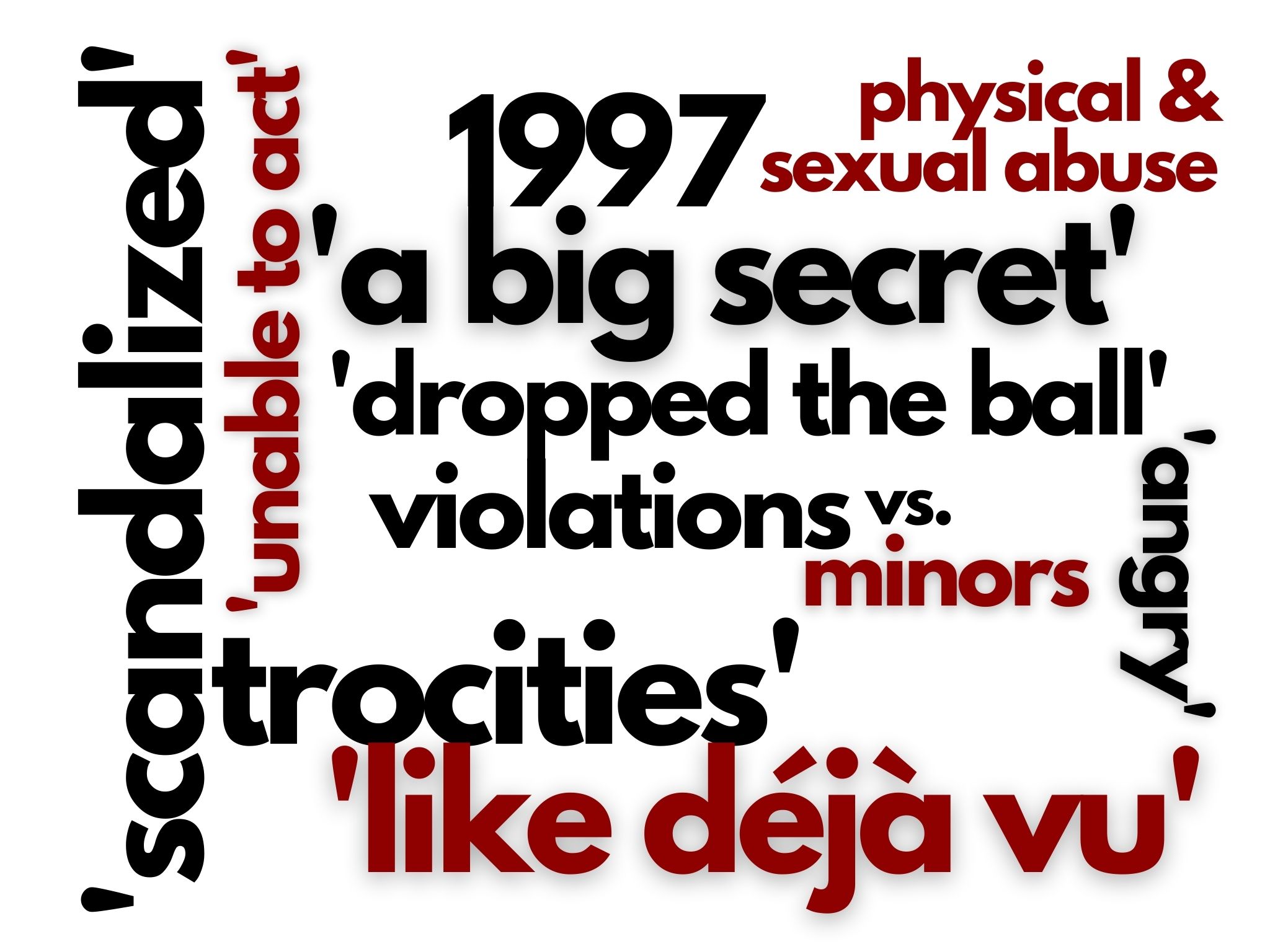 “Because we know what we capable of as a society is why we belly hurting so yuh know. We know we selves.” Blogger Rhoda Bharath's May 10 Facebook status was referring to the disappearance of two-year-old Kymani Francis, who had gone missing in south Trinidad the day before. The entire nation remained on tenterhooks hoping for his safe return (he was later discovered drowned) — but following a recent task force report documenting widespread abuse in state-run and funded residential children's homes, her words cut deeper than ever.

The findings in the Judith Jones Task Force report, which detailed everything from drug transactions to rape of minors, spurred calls for the Children's Authority, the state body charged with promoting and ensuring the rights of children as laid out in the United Nations’ Universal Declaration of Human Rights and the UN Declaration and Convention on the Rights of the Child, to do its job and act in defence of the minors it is charged with protecting. However, this latest report is not the first that has documented the horrors in children's homes across the country.

Twenty-five years ago, under the United National Congress administration led by then prime minister Basdeo Panday, the Sabga Task Force conducted a report into children’s homes, via the ministry of Manohar Ramsaran, who was minister of social development at the time. The 1997 report was damning. The seven-member task force mandated to investigate the conditions and treatment of children in homes run by state and religious organisations alleged that there were “brutal episodes of neglect and physical, psychological, and emotional abuse” by a nun at a well-known home for girls, as well as repeated sexual abuse of children by a male employee at another home.

In a May 5 interview with the Trinidad Express newspaper, a former task force member, under condition of anonymity, said the report — which was never laid in parliament — was “heavily sanitised” and “treated as a big secret”:

We were advised that a copy be sent to the then-Social Development Minister and told to destroy the copies we had. Several high-profile persons were implicated when we conducted interviews, including nuns and businessmen. Racism was also uncovered at some of these homes. It was toxic. The homes were failing their charges and financial impropriety was rampant.

The report noted that the allegations were never properly looked into, either by the Catholic Church, which claimed that it was “unable to act on behalf of the Statutory Authorities Service Commission” (which had employed the nun in question), by the police, or by the state agencies overseeing the running of the homes.

Quite apart from the abhorrence of the crimes, it is this inaction and unwillingness to actively confront such horrendous injustice, that is hitting citizens hard. One newspaper editorial put it bluntly:

That team’s probe unearthed layers of corruption [in 1997]. Young victims shared accounts of being groomed for the sexual gratification of politicians, business people and staff members and there was evidence of physical abuse, fraud and misappropriation of government funds.

Although the report was handed in to former social development minister Manohar Ramsaran […] and got approval from the then Basdeo Panday Cabinet for further action, to this day there have been no arrests and no one has been held accountable.

Little has changed. If anything, conditions are worse.

Following this most recent Judith Jones Task Force report, however, Minister of Gender and Child Affairs Ayanna Webster-Roy announced the current government's 126 million Trinidad and Tobago dollar action plan (the equivalent of about 18.5 million United States dollars). The task force has been given six weeks, from the time the report was laid in parliament on April 29, to submit an action plan. The report had been presented to the relevant authorities in December 2021, prompting questions as to why such an urgent issue took four months to be tabled in parliament.

The Facebook page Newsauce, run by the blogger Rhoda Bharath, who some deem a sympathiser to the current government because she provides communications services for a state agency, commented:

What angers me about this story is that none of this is new. Webster-Roy has been there 6 yrs now. Why after 6 more years of exploitation and abuse we yet again discussing putting measures in place?
Why are sex abusers still working at these homes and not charged?
Until I see drastic action Webster-Roy's words [that perpetrators will be dealt with] remain lip service.

Indeed, former Children’s Authority chair Hanif Benjamin — citing a recent case in which two escapees from one home were later found murdered — attested that there had been previous complaints against that particular home.

However, The Children's Authority itself came under heavy fire for its own startling failures, with Wired868 contributor Noble Philip calling it “another example of half-baked work done by our politicians on behalf of the vulnerable”:

In the first nine months of operation, the Authority was overwhelmed by 4,158 reports. The system buckled under the load.

On May 16, the country's current prime minister, Keith Rowley, advised that he and his party, which would have been in opposition in 1997, were never made aware of the contents of the Sabga report. At the same time, he noted that the Judith Jones Task Force “sought diligently to get access” to this report, “but even their best effort could not provide them with a copy from any source.”

Saying that he was “shocked, scandalized and angry” that “our worst suspicions appear to have been long confirmed and known perpetrators have been protected and aided by persons and institutions known and unknown,” Rowley called on the Commissioner of Police to “take immediate steps to find this Sabga Report and the evidence of all those who were aware of this frightening situation and take all necessary action against all who have been implicated in or with these very shocking revelations […]”

The chair of the 1997 report, Robert Sabga, who now resides in Canada, said that the findings included the sexual grooming of minors for politicians and businessmen, achieved through kickbacks to civil servants. Just as disturbingly, he referenced the case of 11-year-old Akiel Chambers, who was found dead in a swimming pool after a party in an upscale neighbourhood in 1998, claiming that the child's murder could have been prevented had the task force been able to “find evidence” to expose an alleged paedophile ring in operation at the time. Sabga claims that “the same individuals who were implicated in [Chambers’] buggering and death were names [his team] had heard during [its] investigations.”

Saying he is willing to assist with police in any way he can — short of calling names — Sabga explained, “I am all for justice being done, but everything we were told is anecdotal at best, and cannot be substantiated […] The police will require hard evidence, and that I am unable to provide. It is the same problem we faced when compiling the report — we had been told a great many things, but we could actually prove very little.”

Given that the Chambers murder remains unsolved, Sabga's revelation prompted Minister of Housing and Urban Development Camille Robinson-Regis to suggest he should go to the police with the identity of the suspects.

Meanwhile, as newspaper editorials became a chorus of calls for accountability, as well as proper protection of and justice for these children, the Catholic Archdiocese of Port of Spain has said it “takes seriously any and all allegations of this nature, and […] has immediately launched an investigation to now verify the truth of the allegations.”

For victims, however, the truth is all too real. One of them, a man identified as “Kerron” who would have been a minor at the St. Dominic's Children's Home approximately up to the time the Sabga report was filed, shared very powerful testimony with Newsauce during a video interview. His memories included instances of staff using foul language against the children, threats and intimidation, and physical and sexual abuse.

Stunningly, when he reported these “atrocities” to the management of the home and the alleged abuser was confronted, he reportedly admitted to the crimes and was asked to resign, but a police report was never filed, nor was Kerron ever examined by a medical professional. “Someone dropped the ball,” he said. “The institution themselves covered up the entire incident.” Kerron also alleged that despite the gross misconduct, his abuser was assisted in finding other employment: “He was in a position of authority to protect children and he violated that.”

While some legal experts felt the report compiled by the Sabga Task Force should have been sent straight to the country's Director of Public Prosecutions (DPP), others felt that — despite Manohar Ramsaran's insistence that nothing could be done under his tenure as social development minister because of a lack of evidence — victims could still get justice by coming forward with their stories.

Yet, on both sides of the political aisle, the focus seemed to be more on playing the blame game than on finding solutions to an urgent and dangerous scourge. In a post-Cabinet media briefing on May 12, Prime Minister Keith Rowley said that public calls for unlicensed children's homes to be closed down would have to be channelled to The Children's Authority. At least one institution has gone on the offensive, stating its intention to file a defamation lawsuit.

How the feds’ civil suit against Steve Wynn helps Hunter Biden . . . how convenient

Why Biden’s Hispanic support has collapsed