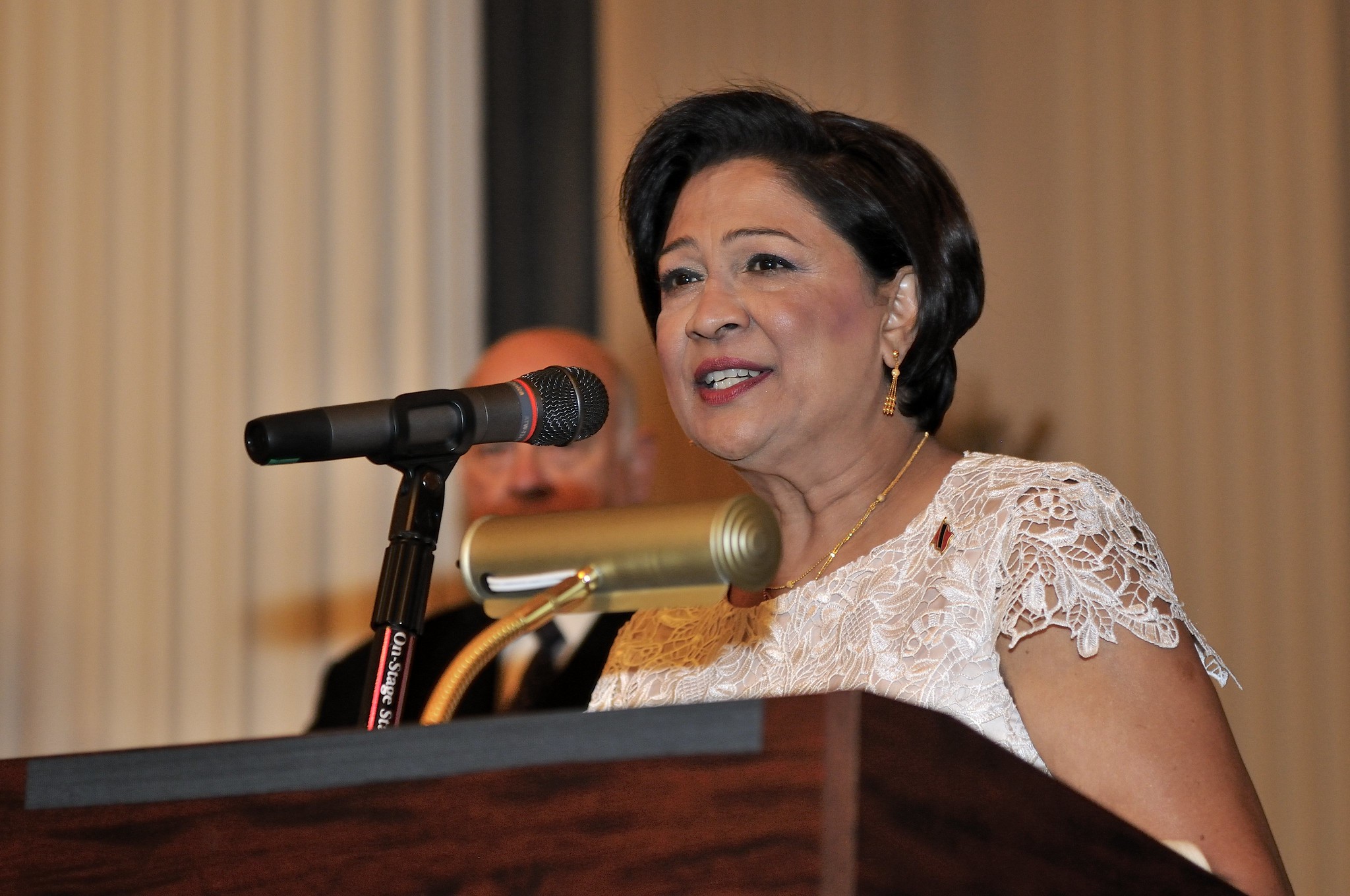 Kamla Persad-Bissessar, current Leader of the Opposition of Trinidad and Tobago, at an April 19, 2013 Organisation of American States (OAS) event in Washington, DC. Photo by Juan Manuel Herrera/OAS via OEA – OAS on Flickr, CC BY-NC-ND 2.0.

Trinidad and Tobago, caught in a loop of race-based politics that polarises many voters according to their ethnicity (the country's two largest racial groups are African and Indian, almost evenly split), now has a new incident to add to its shameful list of racial slurs.

During a speech at a United National Congress (UNC) meeting in Princes Town, a predominantly East Indian area that is one of the party's strongholds, Leader of the Opposition Kamla Persad-Bissessar took issue with Minister of Housing Camille Robinson-­Regis referring to her by her full name at a People’s National Movement (PNM) meeting in Arima a few days prior:

But did she lie?

This is crazy. One legacy of colonialism is that people of African descent were stripped of their names and replaced with Slave masters' name. But for a leader to rub this negative effect of slavery on African people is nothing short of lack of historical empathy for us.

@MPKamla, dear, the 'ancestral' name yuh boasting about is no legacy, it is at best clean rags to cover the nakedness of penury. Never forget that those ancestors were shedding multi-generational slavery & destitution. Those with slave master names were forcibly dragged here.

An editorial in the Trinidad and Tobago Guardian, which acknowledged that “ethnic discord is frequently exploited to score political points,” chided:

The UNC leader has again skidded down the slippery slope of race-baiting and stereotyping with her comment about ancestral and slave names, offending and alienating a huge segment of the population she aspires to once again lead. As a former prime minister, she should have known better.

T&T needs leaders capable of bridging the ethnic and cultural divide to build a stronger nation but such people do not seem to exist in our fractured political arena.

Meanwhile, a press statement put out by the PNM Women's League called Persad-Bissessar a “calamitous” opposition leader seeking to “reduce our complex history to platform fodder.”

Some quarters called for Afro-Trinbagonians to be apologised to over the “inappropriate” comment. Facebook user Nicole M. Young explained why Persad-Bissessar's comment shook her to her core:

The former Prime Minister of our multi-ethnic Trinidad and Tobago mocks persons of African descent in her latest rant. She laughs at the trauma. Yes, the West Africans who were viciously kidnapped and brought to the ‘New World’ to be raped, beaten, enslaved, whose culture and identity were ripped from them are now somehow a joke for KPB. Reprehensible!

Notwithstanding the inaccuracy, as indentured servants brought to the region from Indian often had their names changed as well, how low in the gutter is politics of TnT that a leader feels comfortable enough to make such a comment. The disdain one has to have for almost 50% of population one seeks to lead.

The issue got further convoluted when UNC Senator David Nakhid, who has both Lebanese and African ancestry, accused the PNM of race baiting, reiterated that Robinson-Regis did indeed have a “slave name,” suggested that if members of the PNM were “so African” they should change their names, and challenged them to say “what they ever did for Black people.” He added that both Indo and Afro-Trinbagonians, once they set foot in the United States, are Black.

Facebook user Dixie-Anne Banga, who found the opposition leader's comment “degrading, disgusting, disrespectful and racist,” tried to focus on the crux of the matter:

To degrade and disrespect a person or group of people who were forcibly taken from their homeland, stripped of their humanity and identity, brutalized and subjected to hundreds of years of enslavement shows your true intent as being racist and disrespectful.

Mrs. Persad-Bissessar has sunk into the same pit that she so vehemently accuses Dr. Rowley of being in. You cannot fight disrespect with disrespect when you hold such high public office.

As for the issue of names, Dr. Lovell Francis, who was once a PNM parliamentarian, noted:

Naming on a plantation during enslavement was a vicious thing. It was intended to not just dehumanise the enslaved but also to destroy itheir African identitities and condition them to a life of humiliation. So one was just as likely to see someone named Billy as one was to see a PERSON named Rover, or Gorilla or Cat…

That convention of Christian names and “slavemaster” surnames came closer to the end of the system when it's apologists were trying to prove that it wasn't so bad. And the fact that people of Aftican origin today have names untethered to their African origin is a testament to the attempts at cultural erasure attempted on the plantation…

In a follow-up post, Francis got the last word:

And,
Let me make this clear…

Captured Africans had their names removed and replaced forcibly. Indentured Indians had their names altered by British officials who could not care less about their identities. Some immigrants opted to change their names themselves out of aspirations for a better life. Nothing new under sun…

These are things all of us should know. That we don't tells its own macabre story.

Even after 70 years on the throne, Queen Elizabeth is still the GOAT