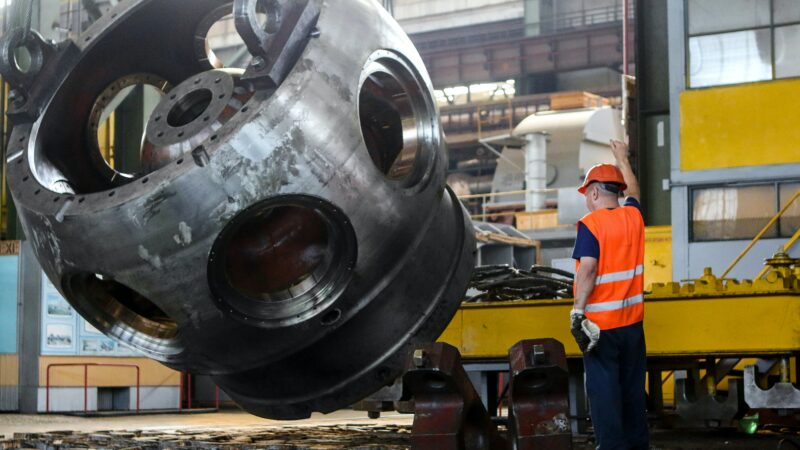 Photo of a Ukrainian metal factory by Kateryna Babaieva. Free to use from Pexels.

Despite the war,  the Ukrainian government is trying to pass long-planned economic reforms. Policies that have previously been unpopular with voters, such as reforms of the civil code and the judicial system, are once again being brought up for consideration, receiving streamlined approval. Some experts wonder if the war has been used as a justification to accelerate unpopular changes, or actualize necessary government reforms previously untenable.

One such case is Law 5371 “On Amendments to Certain Legislative Acts to Simplify the Regulation of Labor Relations in Small and Medium Enterprises and Reduce Administrative Burdens on Business.” Originally introduced and tabled in 2021, on May 12, 2022, the Verkhovna Rada (Ukraine’s parliament) approved a first reading of the law, setting it up for a vote and final approval in June. The law’s stated intention is to liberalize Ukraine’s outdated labor regulations. The bill introduces private contracts between employers and employees, and removes previously stringent restrictions on firing.

As of the end of 2021, Ukraine’s labor force numbered 17,405,000. The International Labor Organization (ILO) estimated that close to 5 million jobs have been lost due to Russia’s invasion. This is the second major reform to the nation’s 50-year-old labor code in two months. On March 15, 2022, Ukraine passed the “Regulation of the Labor Relations during Martial Law,” removing restrictions on firing, relocation, suspension of payment, and relying on “mutual consent of the parties” for employment contracts.  These provisions have been widely criticized across Ukraine.

In the transition to a market economy after the dissolution of the Soviet Union in 1991, Ukraine has had difficulties modernizing its labor market. Ukraine’s average wage (USD 420) and pension (USD 110) was the lowest in Europe, while the undeclared gray market for labor hovered around 20 percent of total employment (possibly much higher). Ukraine’s Labor Code, adopted in 1971 under Soviet rule, has remained supreme in the country, with intermittent amendments in the last 30 years. Prior to 2021, labor disputes were the third most common case heard by the Ukrainian courts. Proposed reforms to the labor law in 2003, 2006, 2016, and 2019  have all previously failed in parliament due to political opposition.

The labor code provides protections to employees not common in the United States or Europe, governing “wages, leave, the right to collective bargaining, and termination of employment.” For example, employees cannot work more than 40 hours a week without additional compensation, overtime cannot exceed 120 hours per year,  and employees are guaranteed 24 paid holidays per year. Most significantly, unlike the United States or many in Europe, Ukraine’s labor legislation does not recognize the concept of “employment-at-will,” and termination is only allowed under specific and predetermined conditions.

Hanna Vakhitova, Assistant Professor at the Kyiv School of Economics and Visiting Fellow at The University of Southern Denmark was interviewed by Global Voices and underlines the dominance of the gray labor market:“The Labor law gives a lot of protection to employees. But it is mostly on paper, there are a lot of ways in which employers can overcome restrictions, especially in regards to firing. In reality, there is a much lower level of protection for workers that are insecure or in a sensitive situation than the formal Labor Code stipulates.”

Vakhitova points out that gender discrimination as another issue:

Young women have a hard time getting employment, because their employer does not want to deal with the legal implications of maternity leave. If you are hired, you can get a three years fully paid and can return anytime, with the firm being mandated to hold the position. This kind of protective regulation leads to the situation where it is impossible for young women to get a a good legal position. Or they will have to sign a resignation letter upon hiring that their employer can then put a date on at a later point.

Liberalization and its implications for the future

To bring the gray market into the open, Halyna Tretyakova, head of the Verkhovna Rada’s Committee on Social Policy, in collaboration with other Servant of the People deputies, introduced law 5371 “On Amendments to Certain Legislative Acts to Simplify the Regulation of Labor Relations in Small and Medium Enterprises and Reduce Administrative Burdens on Business” back in April of 2021. The bill was drafted by the Office of Simple Solutions and Results, an NGO founded by ex-Georgian president Michael Saakashvili. At the time, Ukrainian and international labor organizations vocally opposed the law. As a result of the backlash in 2021, the bill was tabled.

The law, affecting all personnel of businesses with fewer than 250 employees, would allow enterprises to negotiate with employees directly, even if the standards agreed to do not conform to the current regulations under the Labor Code. The main justification has been that current standards harm the development of business and “will bring part of the labor market out of the shadows.”

The critics of the law argue that liberalizing labor relations will harm employees. During bilateral contract negotiations, “due to a de facto inequality in relations, it will be possible for an employer to impose longer working days and lower than the legally guaranteed salary.” Additionally, the law permits “the employment contract [to] specify additional rights, duties and responsibilities of the parties, conditions of material support and organization of work, conditions of termination or early termination.” Furthermore, while Ukraine’s current labor legislation outlines the role of labor unions in relevant employee negotiations, Law 5371 removes such requirements.

Dmytro Onuchenko, partner at Unimindes Law Firm in Kyiv, summarized the implications of the bill, stating that it “reduces a number of rights and labor guarantees contained in the Labor Code now; deprives trade unions of representative functions; legalizes the conditions in the employment contract that may worsen the position of the employee compared to applicable law; [and the] legal equality of employee and employer will exist only on a declarative basis.”

Trade unions across Ukraine have opposed labor reforms in the past, and this law in particular. On May 19, the Association of Trade Unions of Ukraine stated in an open letter to parliament:

Trade unions warn deputies of Ukraine against misguided decisions that could lead to discrimination against small and medium-sized enterprises regarding labor rights and undesirable destabilization of the situation, which is unacceptable during martial law

On May 23, the Trade Union of Railway Workers and Transport Builders of Ukraine posted an opposition statement on their public Facebook page, stating:

The war will surely end in our victory and we will all return to a peaceful life, but will we still be able to count on decent protection of our labor rights and socio-economic interests – “a great question,” because some MPs have decided to use the martial law to achieve its goal and to give employers absolute dominance in relations to the employee, and at the same time destroy the work of trade unions, which hinder them in this.

Ukraine’s Social Democratic parties have additionally started a petition to remove Halyna Tretyakova, head of the committee on social policy who introduced the bill in 2021:

At present, all the energy of the Ukrainian people is thrown into the just fight against the Russian aggressor, so it is unacceptable to promote initiatives that undermine the defense capabilities and faith of the population in justice. However, Halyna Tretyakova, Chair of the Verkhovna Rada Committee on Social Policy and Protection of Veterans’ Rights, distinguished herself by such initiatives. Her tenure is a mockery of social policy and veterans’ rights.

Some have even written songs in opposition to Tretyakova's work as a leading member of Servant of the People Party.

If passed, the law would bring significant changes to Ukraine’s 50-year-old employee-friendly labor legislation. It remains unclear exactly how labor unions will be impacted, and whether the harm of employment-at-will contracts would outweigh the massive gray market of existing unregulated labor relations.

Professor Vakhitova concludes, “I think this is the right direction for Ukraine’s labor. Ukraine is not Denmark or Norway. You can afford very protective regulation when productivity is very high and you don’t have to catch up economically. Right now, we need to support businesses in creating new positions; reducing hiring and firing costs is a small piece in that puzzle. We should obviously require our laws to protect workers, but if there are no jobs, there will be nothing to protect.”