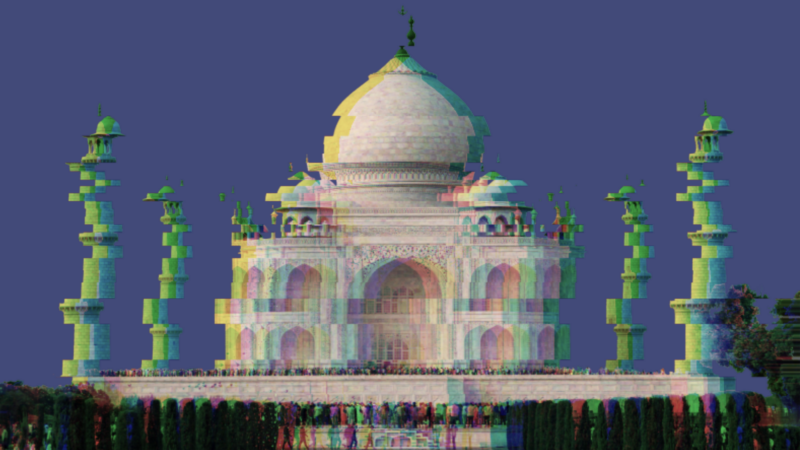 This story is part of Undertones, Global Voices’ Civic Media Observatory's newsletter. Find out more about our mission, methodology, and publicly available data. Subscribe to Undertones.

Muslims in India are seeing their homes, history, and mosques being dismantled. Muslim schools are becoming secular, Muslim rulers are disappearing from history books, mosques are being converted into Hindu temples, and state forces have physically demolished Muslim-owned homes and businesses. Indian Muslims are under threat.

Even India’s iconic Taj Mahal monument, a world-renowned Muslim mausoleum built by a Mughal emperor to honor his late wife in the 17th century, is now under question. More and more hyper-nationalist Hindus – within media ecosystems rife with Islamophobia – are convinced that the Taj Mahal was, in fact, built over a Hindu temple and so must be repurposed that way, even though the case was settled by Indian courts in 2017.

Ever since Narendra Modi, who is from the Bharatiya Janata Party (BJP), came to power in 2014, extreme pro-Hindu narratives entered the mainstream. Islamophobia is rampant in political discourses, which is then amplified by mainstream media and pro-Hindu groups online, creating feedback loops. The basis of the BJP party’s philosophy is Hindutva – a political ideology that seeks Hindu supremacy in all avenues, including the nation-state.

India is home to one of the world's largest Muslim populations, but Muslims are still a minority within the country. In its 2011 census, Muslims comprised 14.2 percent of the population, while Hindus accounted for 79 percent.

Voices critical of the government’s Islamophobia are few and far between. Online, posts that speak on behalf of Muslims’ rights are hyperlocal and do not garner much engagement. When they do attract attention, right-wing trolls verbally attack and threaten them. Modi’s government has dubbed all critics “enemies of India,” which may further quell freedom of speech.

1. “All Islamic structures in India should be demolished or converted to Hindu temples”

The ruling party and other hyper-nationalist Hindu groups are asserting that all Islamic structures in India, like mosques and monuments, were built either on Hindu land or ancient Hindu temples. For them, these structures need to be demolished and converted to give justice to Hindus.

This narrative erupted in 1992 with the demolition of the 500-year-old Babri Mosque based on claims that it was built over a Ram (Hindu God) temple. The BJP and its ideological parent, the RSS, launched a campaign against the mosque and tore it down, leading to conflict, riots, and the death of hundreds of Muslims and Hindus.

Currently, right-wing groups are targeting the famous Gyanvapi mosque in northern India, and also the Taj Mahal. They presented a petition to the courts claiming that the Taj Mahal is originally a Shiva (Hindu God) temple. This narrative has been circulating on Instagram, Telegram, and Whatsapp groups.

A nationalist Hindu page on Instagram posted two side-by-side photos, one of Babri Mosque, which was demolished by right-wing Hindu extremists in 1992, and another of the Gyanvapi Mosque. The post claims that what happened in 1992 must also come to pass in 2022, thereby encouraging Hindu groups to demolish the Gyanvapi mosque. The post garnered 3k likes and enthusiastic messages calling for the mobilization of Hindus. (See the analysis here) 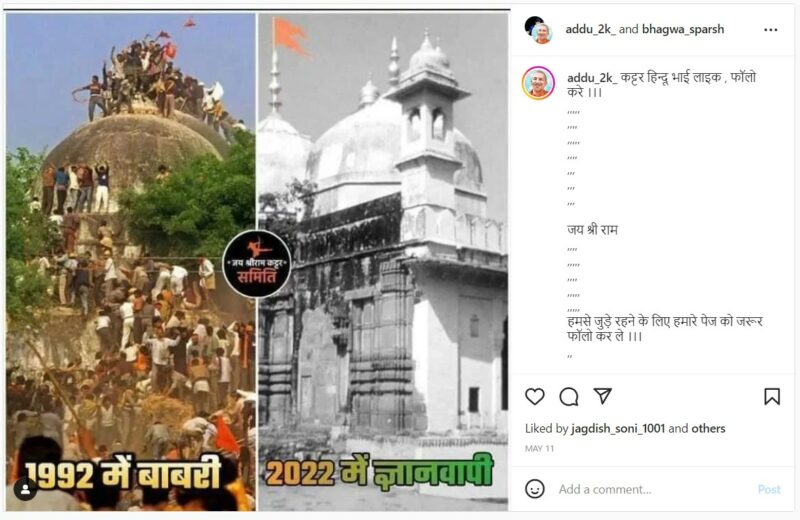 In our analysis, this post ranked the lowest point on the Observatory’s civic impact score (-3) because it incites violence and has reached a large audience.

The following post shows criticism of anti-Muslim peddling. The local opinion page, Ulta chasma uc, sarcastically points out that while young people in the state of Uttar Pradesh struggle with unemployment, the BJP-led state government “is busy finding idols in mosques and building temples.” (See the analysis here)

In our analysis, this post received a +2 in the civic media impact score because it is one of the few that have openly challenged the BJP's Hindutva rhetoric and aimed to draw attention to the actual problems faced by Indians.

2. “Muslims are outsiders and are not real Indians”

Under this prevalent but growing narrative, everything from Muslim prayers and clothing to cuisine is under attack by right-wing Hindu outlets. The BJP and allies assert that all Muslims living in India and in the broader subcontinent are outsiders who invaded the region and are now threatening Hindu society.

Islam in India has come from travelers, traders, as well as historical invasions, which spanned from the 12th to the 19th centuries, namely by Central Asian, Persian, and Mughal rulers. Arab and Persian cultures have become integral to Indian cuisines, art, languages and traditions. Indian culture and history cannot be understood without the influence of different cultures over the centuries.

Since 2017, India’s BJP-controlled states have been significantly revising history books to reduce the importance of Mughal rule and to highlight Hindu reigns. The latest revision happened on a national level in April this year, as India’s central board of secondary education decided that high schoolers will have syllabi with significantly less information on the Non-Aligned Movement, the Cold War, Islamic empires, Mughal reigns and the industrial revolution. Popular Urdu poems have been excluded as well.

On Twitter, pro-Hindutva user Deeksha tweeted an illustration depicting Hindu dynasties along with the length of their reigns, which have been exaggerated. It was retweeted nearly 2k times and received 6.3k likes.

The tweet was made amidst growing accusations by Hindutva groups that the Indian education system is favoring Muslim rulers in textbooks. Here, the Mughals – like all Muslims – are seen as outsiders and invaders while Hindu rulers are called Indians. This is an attempt at fusing India and Hinduism. (See the analysis here) 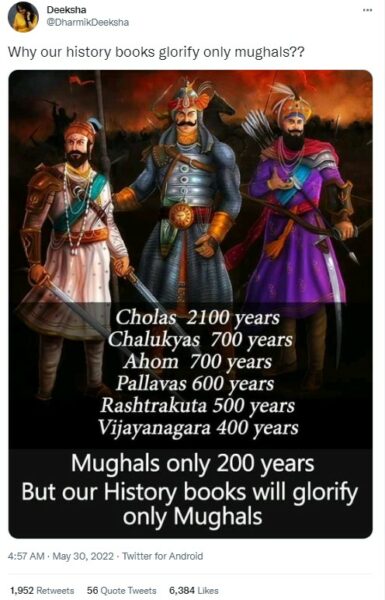 Because this tweet promotes Islamophobia and because it is factually incorrect, it received a civic impact score of -1.

Islamophobia has been present in India for decades, but with the BJP coming to power in 2014, other religions, especially Islam, have been actively vilified in popular discourse. In this narrative, the BJP and allied media assert that Muslims are regressive, patriarchal and violent.

With nearly 8 million views, a video shared by Hindutva propagandist page Rag Darbari depicts a TV show setting up a debate between Hindu and Muslim religious leaders. The Hindu preacher – on prime time for the first time – claims that Muslims are hypocrites who have been disrespectful of Hinduism and Hindus for centuries. He points at his fellow panelists, the Muslim clerics, and calls them backstabbers. He claims that statues of Hindu idols lie beneath the ground in the Gyanpavi Mosque. The video does not share the riposte of the Muslims. The video, and how it is edited, suggests that Muslims are untrustworthy and must convert to Hinduism in order to stay in the country. (See the analysis here)

As this video consists of hate speech and false claims directed at Muslims and because it reached a massive audience, it scored -3 on the civic impact card.

The following item depicts one of the few news reports that call out the BJP’s violence against Muslims. On April 16, a Hindu procession was seen brandishing swords and guns and singing songs that contained open threats of ethnic cleansing and genocide against Muslims. This is part of a pattern of provoking Muslim communities and then using their retaliation to justify state-sponsored anti-Muslim violence. When this incident led to clashes, the police and government only took action against the Muslims.

The Facebook live, broadcasted by journalist Ajit Anjum and republished on a fan page, received a +2 on the civic media impact scorecard. (See the analysis here) 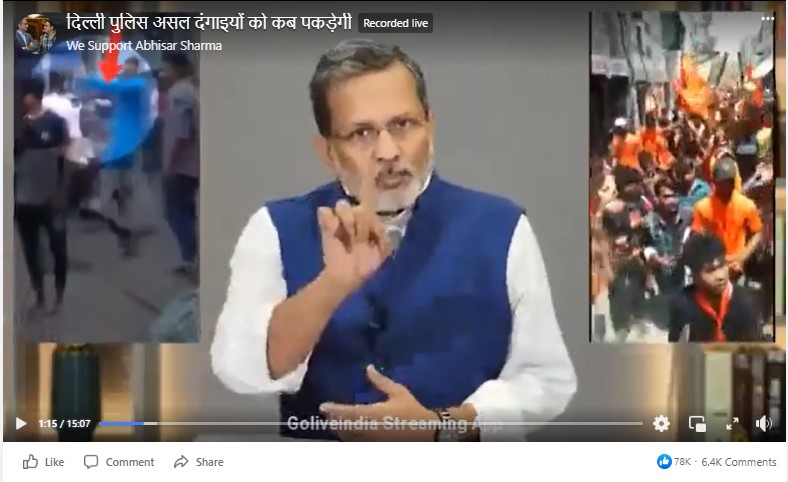