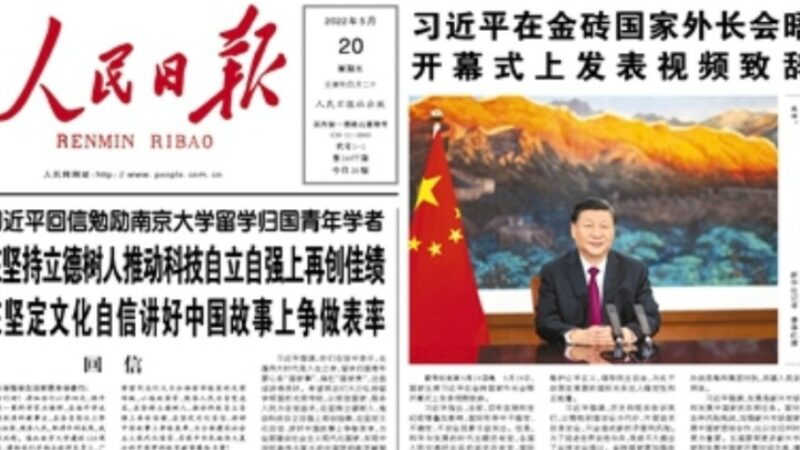 A sreenshot of the state-sponsored People's Daily newspaper on May 20, 2022. (via China Media Project)

Rumours of Chinese President Xi Jinping’s potential resignation have swirled on Chinese social media over the past two weeks and prompted speculation among overseas Chinese dissidents.

The rumour first came from a Canadian based Youtuber, Lao Deng (老灯), who cited an anonymous Chinese security official as his source on May 5, 2022, claiming that Xi agreed to let Chinese Premier Li Keqiang handle China’s economic and diplomatic crisis during the Chinese Communist Party's Politburo Standing Committee meeting at the end of April. The video blogger called the process “a coup” as Xi was confronted by a number of senior party members. A few English media outlets picked up the story at this point.

A few days later, several English news outlets, including India based ANI and UK based tabloid Daily Mail cited some unverified Chinese sources that Xi was suffering from a cerebral aneurysm, a bulge in the brain's blood vessels that can cause painful headaches, reduce neurological function, and lead to deadly brain bleeds.

These rumours have emerged against the backdrop of Xi Jinping’s upcoming bid for his third Presidential term. After the two-presidential term limit was removed from the Chinese Constitution in 2018, it became clear that Xi hoped to remain in power indefinitely. The upcoming CCP's summer summit in Beidaihe would be critical for securing his leadership position.

However, the Chinese economy has been hard hit by the zero-COVID pandemic control policy and people are becoming pessimistic about the future of the country.

China’s economy is paying the price for its Covid Zero policy:
*Industrial output – 2.9% in April from a year ago
*Retail sales contracted 11.1% (vs est. 6.6% drop)
*Unemployment rate climbed to 6.1%, youth jobless rate hit a record via @JDMayger https://t.co/QdSe5LwOwl

An economic stimulus plan was introduced in the CCP Politburo Standing Committee meeting and the Wall Street Journal reported on May 11, 2022, that Premier Li Keqiang has re-emerged to centre stage to fix China’s economic problems after biding his time behind the scenes for a number of years.

Chinese media observers also noted that both Xinhua and China Daily have started featuring other Chinese leaders including Li Keqiang, Wang Yang (Chairman of the National Committee of the Chinese People's Political Consultative Conference) and Li Zhanshu (Chairman of the Standing Committee of the National People’s Congress) on their frontpages while Xi had been absent from the media spotlight more usual.

Today's absence marks the 5th front page in the People's Daily this month w/out Xi Jinping or a title ("general secretary") in a headline. This was our minimum benchmark for Xi's absences being notable. Keep watching! Another week of May to go. pic.twitter.com/wDS64xuZZO

According to the CMP’s earlier analysis, more than five absences for Xi from the People’s Daily front page in one month would be something unusual.

On Twitter, there are many discussions attempting to decode the signs surrounding the rumours and media coverage.

Those who believed in Xi may step down pointed to his zero-COVID strategy and China's lockdown measures as policies that have critically undermined his popularity. Veteran Chinese dissident Hu Ping, however, rebuked the analysis, as it implies Xi’s power was based on popular support from common people or party elites.

At the same time, even those who did not believe in the rumour had joined the discussion to express their discontent about the situation in China:

When Wen Jiabao first came into power, many people saw hope. Some even held meetings to express their support. In one of such dinner gatherings, I remained the only one who was sceptical about Wen. What about the current cheering for Li Keqiang? This is just another false hope created by speculators of Zhongnanhai (the CCP's top leaders). Those who support Li Keqiang probably expressed their support for Xi Jinping back in 2012–2013 because Xi Zhongxun (Xi Jinping’s father) was a reformist?

Some dissidents, particularly those affiliated with exiled Chinese tycoon Guo Wengui, also spread the conspiracy that suggested Xi was behind rumours.

While there is no channel for us to verify these rumours, China observer Bill Bishop's review of the politics of rumours in contemporary China does shed some insights into the confusing picture:

Workers hope returning to the office will help their sex lives: survey