With spokesperson’s suspension, BJP supporters have started losing faith in the party 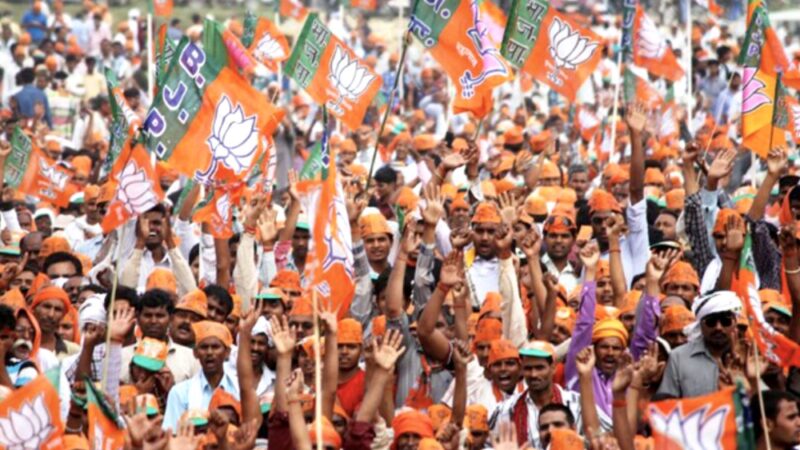 This story is part of a Civic Media Observatory investigation into the Indian media ecosystem. To learn more about this project and its methods, click here.

On June 5, 2022, the ruling Bharatiya Janata Party (BJP) in India suspended its spokesperson Nupur Sharma and expelled its Delhi media head Naveen Kumar Jindal over their remarks on the Prophet Muhammad that have made headlines in India and abroad.

On the night of May 26, Sharma allegedly made derogatory remarks against the Prophet Muhammad during a show about the Gyanvapi mosque–Kashi Vishwanath temple dispute on Times Now, a private TV news channel. On May 28, Raza Academy, an organization of Indian Sunni Muslims, filed a First Information Report (FIR) against Sharma under Sections 295A (acts intended to provoke religious feelings), 153A (inciting enmity between different groups) and 505B (pursuading to commit an offence against the State or disturbing peace) of the Indian Penal Code. A second FIR was lodged on May 30.

There was widespread condemnation of Sharma’s remarks in India, while many also defended her. Expat Indian Shafi Burfat tweeted:

Nupur Sharma has the right to express her views & position in front of the world without any hesitation.If anyone wants to disagree with her then he can disagree with her viewpoint but threatening her is a rude act.We are with Nupur Sharma & will remain.#India @NupurSharmaBJP pic.twitter.com/3QGk5Iis7H

On June 3, violence erupted in the city of Kanpur in the northern state of Uttar Pradesh after some groups protested against her remarks. Dozens of people were injured and the police charged over 800 people in connection with the violence. India soon found itself in a diplomatic row with a number of Muslim majority countries in the Middle East, who condemned the derogatory remarks on Prophet Muhammad. There are over 6.5 million Indian migrants in the Middle East.

#Statement | The Ministry of Foreign Affairs expresses its condemnation and denunciation of the statements made by the spokeswoman of the #Indian Bharatiya Janata Party (#BJP), insulting the Prophet Muhammad peace be upon him. pic.twitter.com/VLQwdXuPuq

Qatar, Kuwait and several other Muslim nations summoned the Indian ambassadors in their respective countries and lodged official protests against India. The hashtag #BoycottIndianProducts was trending on Twitter, and a Kuwaiti supermarket pulled Indian products off their shelves.

The Indian Embassy in Qatar responded:

Our response to a media query regarding statement issued by Qatar MOFA on an offensive tweet in India: https://t.co/IIIrWPiZ9A pic.twitter.com/FjmKqt2Cey

The Indian government’s response that these were not the views of the Government of India, but of fringe elements, created further debate. Many BJP supporters were outraged by the decision to remove Sharma and Jindal and showed their support for the two, while others backed the BJP’s move.

The Organisation of Islamic Cooperation (OIC) condemned Sharma's remarks, saying that they came “​​in the context of the escalation of hatred and abuse of Islam in India,” which an Indian Foreign Ministry spokesperson rejected calling ”narrow-minded”.

Anti-Muslim violence has been escalating in India, with state-sponsored attacks on Muslims through strategic campaigns and the dissemination of misinformation and propaganda on social media platforms and primetime news channels.

Read More: Decoding the role of mainstream and social media in the recent anti-Muslim violence in India

#ShameOnBJP, #ModiShamesIndia, and #ShameOnBJPGOVT were the hashtags trending on Twitter following the BJP action towards Nupur Sharma and Naveen Jindal. Indians took no time to realise that the decision had come, not out of a sudden sense of guilt or regret over the remarks, since BJP members have historically always indulged in anti-Muslim hate-speech, but solely in response to external pressure from Middle Eastern countries. To BJP supporters it meant that the Hindu nationalist party had accepted defeat in the face of threat and condemnation from Islamic nations. For a prime minister who had built his media image as that of a hypermasculine Hindu leader, the act of bowing down in front of Islamic nations was seen as an insult, a symbol of Hindus bowing down to Muslims. The BJP propaganda machine had convinced Indians that Narendra Modi had single-handedly increased India’s power and prestige in the global sphere. Indians believed that Modi’s India was invincible and powerful. Thus Modi’s decision to apologise and take action against his own party members appeared to tarnish that notion and Modi’s own image as the powerful Vishwaguru (leader of the world). It undermined India’s self-proclaimed position of power in the global sphere.

Some memes called Modi a poor leader, someone who would leave his people in crisis just to save himself. Twitter user सत्य वचन (true words) tweeted:

Dear @narendramodi @PMOIndia you have to be shamefull that your leader are causing to be ashamed for us. Very shameful .A poor leader for foreign relationship. https://t.co/JaiQ9lrfrD

Others accused Modi of being a Muslim and owing his allegiance to Muslims instead of Hindus. They claimed that Modi had shown his true avatar by shunning his Hindutva principles to side with Muslims. Twitter user Maurya Ji tweeted:

The BJP and RSS are now becoming a liability for Hindus. pic.twitter.com/CB8DKALXQh

As per the CMO analysis, the emerging narrative claimed that the BJP had now become a liability for Hindus. The party’s supporters angrily asserted that the BJP no longer cared for Hindus and had now gone against its Hindutva promise.

Suspending @NupurSharmaBJP is a cowardly act by the BJP. The party has thrown her to the wolves.

Nupur, we want you to know: The strength of this nation rests in the hands of her people, not any party, and We, the people, stand with you, always, every step, every breath.

They explained that the BJP can no longer serve the interest of Hindus, so it was best to replace the BJP with a truly Hindu party. User Rajesh Verma quipped:

BJP has become difficult to tolerate now all Hindu organizations are requested to form their own political party and remove BJP from power.#shameonbjp pic.twitter.com/w99q9cdCeU

It has happened today but it should not happen in future, BJP leaders should pay attention.#ModiShamesIndia pic.twitter.com/kOQyITaDRG

Those who used to say, we will never let India bow down. Their hateful speeches have shamed India in front of the world.

Although all these arguments against the BJP have been rooted in a Hindu nationalist ideology, this incident has also ended up making space for a sensible and logical critique of the party and its harmful polarizing Hindutva politics. Under the BJP’s governance, the space for critique and dissent has actively shrunk, with state forces cracking down on journalists, activists, scholars and even common citizens for daring to speak against the party’s politics. CMO analysis shows that this social media outrage created the much-needed space for dialogue and dissent against the party, one which is rooted in democratic and secular ideas. Many people have blamed not the BJP’s suspension of Nupur Sharma, but rather its communal politics for maligning India’s image in the global sphere. They have claimed that it is the party’s anti-minority actions and Hindu nationalism that have altered India’s much-revered secular fabric and degraded the country’s image globally.

It remains to be seen if the mainstream criticism of the BJP has emerged as a sustained trend or as a momentary reaction.

YouTube is now censoring journalism for the Biden administration