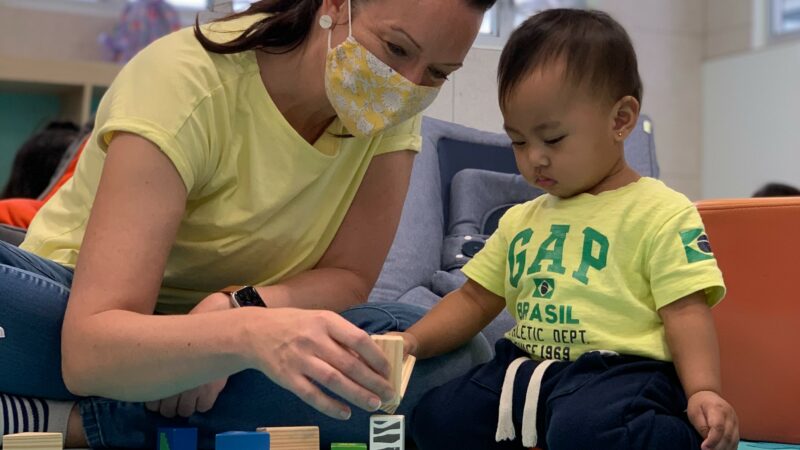 Some women refugees are stuck in Hong Kong with their “stateless” children. Photo from Pathfinders Hong Kong, used with permission.

When Global Voices interviewed Ind (a pseudonym), 47, and Sasa (a pseudonym), 37, women refugees from the Philippines, they were picking up food donations from volunteers at Refugee Union, a non-government organization focusing on refugee rights in Hong Kong on April 20, 2022.

Ind became a non-refoulement claimant in 2020 and Sasa in 2017, meaning they believed their safety would be at risk if they returned to their home country. Both women have been stuck in Hong Kong while their claims are being processed by the city's immigration officials. During this period, they have not even had enough resources or financial support to provide food for their families.

Adella Namagembe, the chairwoman of the Refugee Union, explained in an interview with Global Voices that half of the refugees aided by the organization in Hong Kong are women. Most are former foreign domestic helpers from lower-income communities in Southeast Asia, including Indonesia and the Philippines. Ind and Sasa are two of the 14,000 refugee applicants in limbo in Hong Kong.

Refugees are not generally welcome in Hong Kong. The Hong Kong government is not a signatory to the 1951 United Nations Refugee Convention. The city does not grant asylum to anyone, nor does it recognize anyone as a refugee. Any person who claims to be threatened or persecuted in their home country is required to submit a non-refoulement claim to the Immigration Department after their valid visa has expired, which means all asylum claimants have no legal status in Hong Kong.

The illegal status makes them extremely vulnerable, according to a 2021 UN report written by Justice Center Hong Kong, a migrant organization:

This perpetual illegal status affects every aspect of claimants’ daily lives, such as accessing healthcare, housing and education. This illegality is also inherited by children born to claimants in Hong Kong, who may be stateless.

The city’s Immigration Ordinance forbids local newborns of non-Chinese and non-permanent residents from acquiring citizenship. Hence, the children of refugees and foreign domestic workers, if neither of their parents is permanent residents or Chinese nationals, become stateless.

Due to their illegal status, asylum claimants cannot earn income or access state-sponsored services such as healthcare and education. They can only apply for a monthly HK 1,500 (USD 151) housing allowance, a monthly HK 1,200 (USD 152) food allowance, and around HK 200 (USD 25) for transportation per month from the International Social Service Hong Kong Branch. This figure has remained unchanged since 2014.

The plight of refugees in Hong Kong has worsened since the COVID-19 pandemic began, as they are struggling to survive amid food shortages and soaring prices.

The screening of non-refoulement claims is a very slow process with an extremely low success rate.

Since March 2014, Hong Kong has relied on a Unified Screening Mechanism (USM) for all non-refoulement claims, meaning all applicable claims are assessed in one go. Persons whose non-refoulement claims are substantiated under USM on grounds of persecution risk will be referred to the United Nations Refugee Agency for recognition as refugees under its mandate and, if recognized, they are resettled to a third country.

Hong Kong can only serve as a transit point for refugees rather than a destination.

Currently, the substantiation rate is less than 1 percent and the number of judicial challenges to the screening result has increased by 30 times from 103 cases in 2015 to 3,000 cases in 2018.

The USM has been heavily criticized by civil society organizations, including for not considering gender when evaluating persecution risks. In a Zoom interview with Global Voices, Isabella Ng, the founder of the Hong Kong Society for Asylum-seekers and Refugees pointed out:

There are very few cases where female refugee status has been recognized, and among the cases that we have come across, almost none of the claims have been confirmed.

…there is little recognition that violence against women, such as domestic violence, forced marriages, trafficking or female genital mutilation, can constitute legitimate grounds for international protection where violence against women is tolerated by the State. Even in cases where the perpetrators were state actors, decision-makers often conclude that these actors were not acting under state orders and do not recognise their acts of violence as indicative of the women’s past experience or future risk of persecution or other violations.

Ind and Sasa spent years waiting for the screening results in fear of being deported to their home country while living on the meager government allowance.

Unemployed during the 2022 pandemic, she was forced to overstay her visa. She chose to apply for non-refoulement status as a last resort.

Sasa, on the other hand, came to Hong Kong in 2013 as a foreign domestic helper and became a non-refoulement claimant in 2017.  During her employment, She was abused and became ill. Her employer dismissed her while she was in the hospital — a violation of local labor laws. Sasa's visa in Hong Kong expired as she could not find another work contract within the 14-day grace period.

However, among those who break their contracts early, many are very vulnerable — some had labor disputes with their employers, and some were sick or even pregnant. The 14-day visa expiration term leaves them defenseless against labor abuse, physical and sexual abuse, and other forms of exploitation.

Carmen Lam, the Deputy CEO of PathFinders, a charity that protects pregnant women and babies who are unprotected in Hong Kong, explained in a Zoom interview with Global Voices:

40 percent of the cases we contacted until 2019 had overstayed in Hong Kong and applied to become non-refoulement claimants, for being pregnant or disabled [usually due to sickness] to find a new job in time.

According to UN Refugee Agency (UNHCR) guidelines, gender-related violence such as domestic violence, sexual violence, or systematic discrimination could be substantiated as persecutions in the screening of non-refoulement claims.

In Hong Kong, the USM has not adopted the UNHCR gender-related persecution guidelines and the majority of the female refugee claimants are rejected in the screening process.

While civil society organizations have been advocating for more humane policies, such as granting claimants the right to work, and a fairer screening process, the mainstream narratives about refugee claimants. Claimants are often stigmatized as “fake refugees,” “toxic tumors,” and “Southeast Asian thieves,” which has created a hostile and xenophobic environment in Hong Kong and added social barriers to policy changes.

Yet, the very label of “fake refugees” is the result of the Hong Kong screening mechanism that neglects the systematic violence female refugees face both their home country and in Hong Kong, as pointed out by Isabella Ng:

Our society divides people into different classes and people don’t want refugees to be here forever because they assume that the refugees don’t have any skills and belong to the lower class… Although many female refugees have encountered discriminations, injustices and different forms of violence from their own countries, their sufferings are not recognized as political persecutions and hence do not meet USM's screening criteria for non-refoulement claimant status. That's why the majority of female claimants can't substantiate their refugee status and become disposable for Hong Kong.