World record Store Day: These Kenyan  DJs are keeping the art of vinyl alive in the digital age 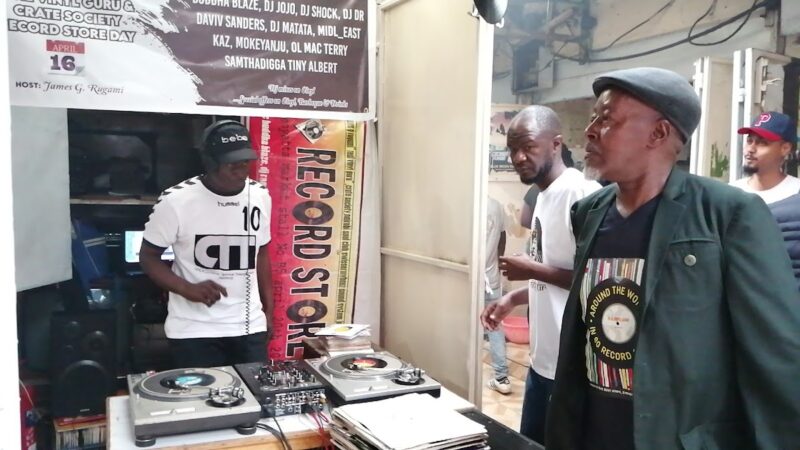 World Record Store Day is an annual event that began in 2017 and is held on one Saturday every April. Originally created to celebrate the culture of independently owned record stores, the concept has been reimagined by Kenya’s vinyl collectors community as the day they come together to share in the joy of buying, collecting, and listening to all manner of vinyl records.

Every year, Nairobians gather at Stall 570 in Nairobi’s Kenyatta Market — one of the country’s most popular record stores — to mark the event. This year, the ritual continued as vinyl collectors, DJs, music lovers, and first-time buyers seeking to start their own collection met at the store to share rare eclectic songs as various DJs played some of their most treasured LPs.

Kenya is experiencing a vinyl revival. Heralded, in large part by the growing interest in East African music both at home and globally, there is a resurgence of interest, especially among a younger generation of music lovers eager to reconnect with their vinyl musical heritage.

Adrian Washika, known as DJ Adrian, is one of Kenya’s most respected veteran Deejays and vinyl collectors. He has never missed the annual Kenyan celebration of World Record Store Day at store 570. Adrian just marked his 50th birthday, and in an interview with Global Voices, he shared a bit about his DJing history.

I have been collecting for about 30 years. I started collecting vinyl even before starting my DJ career. I have about 4,000 records and still collecting.

For vinyl aficionados, the process of going to a record store to look for and buy records is known as crate digging.

When digging for records, I am usually drawn to the oldskool section. This includes old skool Hip Hop, '90s R&B, '80s funk and the Motown sounds of the '60s and '70s and also the African Rhumba classics.  I get to do most of it when I travel abroad and I will always make sure I visit the local record stores. I usually look for something that I have heard but never owned on vinyl or just some classic albums or singles which I come across.

DJ Adrian is among a handful of  Kenyan DJs who have kept the art form of playing vinyl alive. On any given day, you will find him busy shuttling across Nairobi’s entertainment spots with his backpack, crate, and specially customized turntable even as his compatriots saunter in (sometimes in the same club he is playing) with their shiny laptops ready to rock a crowd.

Unfazed by the fact that most in his trade have switched to Digital DJ’ing software, for Adrian, it goes beyond just playing the music. Some music lovers have begun to recognize and appreciate this, he says,

“I have noticed that there is a really huge appreciation of old-school music. There is also an interest in just seeing a DJ actually play vinyl and flip record after record.”

For him and other DJs who have stuck to vinyl, the reasons range from personal preference to unique aesthetic differences like the cover artwork and specific crackling sound as the needle touches the record groove.

What does he think is sparking the ongoing revival among Kenya’s younger generation?

I think it is the interest and curiosity to learn how this musical format actually worked, and also the rarity of it, as opposed to the instant music downloads which they have grown knowing. It could also be the simple pride taken in actually owning a record, complete with the album art. It is something to show as a collection as opposed to a music folder on the laptop.

DJ Adrian recently launched Adrian Vinyl Vibes, live online shows where he plays the music genres that most of his Kenyan fans have come to know and love him for Soul, new jack, old school global, and Kenyan hip hop and RnB, all on vinyl.

On Adrian’s Youtube channel one of his fans left a comment describing the mix as a “Pure Eargasm.”

Sam tha Digga has been collecting vinyl records for at least 20 years. Unlike DJ Adrian, he is not a household name in Kenya, however, he is not your typical run-of-the-mill DJ whose knowledge of music is limited to the contemporary. His knowledge and vinyl collection of  Hip-Hop are unmatched and have earned him a feature in thevinylfactory.com — the world’s foremost vinyl enterprise whose online magazine features collaborations with artists and vinyl deejays to create the VF Live audio-visual show.

In an interview with Global Voices, Sam explained why he prefers vinyl.

Beyond the music, there is something very creative about the way the cover artwork for Viny that no CDs or streaming apps can replicate.  I developed a deep attachment to old school sounds and genres from back when I began collecting and the crackling sounds of surface noise always take my breath away.

Unlike DJ Adrian who is always playing gigs around Nairobi, Sam tha Digga is a digital native who mainly makes his living online. He sometimes plays live sets through his Youtube, and Facebook page, or uploads videos of his deejaying sets. He also uses Mixcloud, a popular online music streaming service that allows for the listening and distribution of radio shows, DJ mixes, and podcasts to share his mixes with his fans.

For, not just Sam and Adrian, but every DJ seeking to make a name for themselves, having a presence on major social platforms like Instagram, Youtube, and Facebook is no longer a luxury. They are the primary marketing tools and channels for their craft. That direct connection with their fans is what helps Adrian and Sam keep their fanbase growing allowing their fans to “follow” them everywhere they are playing, whether on or offline.

There's a cool factor associated with vinyl that remains despite the changing times, that retro vibe cuts across music and fashion thus making vinyl a fashionable music format. People are looking for good authentic music, regardless of genres, they want to learn and explore. Sam says

The new poll showed that 81% of Americans believe in God, which is a six-point drop from 2017. Getty Images A new...