Ylli Morina: the 13 year-old mathematical genius from Skopje who is tutoring university students 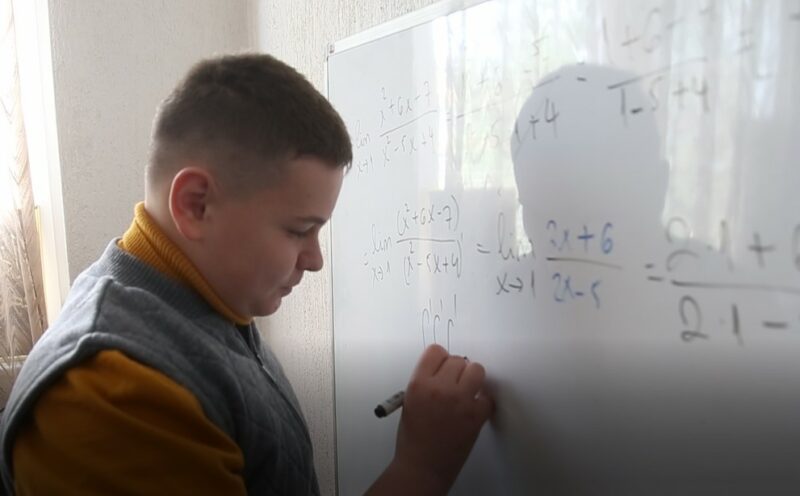 This story is based on original coverage by Meta.mk. An edited version is republished here under a content-sharing agreement between Global Voices and the Metamorphosis Foundation.

North Macedonia joined the Programme for International Student Assessment (PISA), a worldwide study by the Organisation for Economic Co-operation and Development (OECD) in 2015. Since then, it has been receiving low scores.  The latest data from 2018 places the country in last place in Europe in  the three key areas of mathematics, science and reading. This also affects on the level of media literacy in the country. This case of a math prodigy from Skopje exemplifies the need for systemic reforms to solve the problem of the low quality of education system.

Yilli Morina isn’t a boy who is spending his time outside playing football with his friends. He is only 13 years of age, lives in the Skopje suburb of Shuto Orizari and he spends almost every moment solving math and physics exercises and problems. Unlike his peers, due to his knowledge, he is attending classes in the 8th grade of primary education instead of 7th grade. He shares his knowledge freely on his YouTube channel, which is how many university students of architecture, physics, economics and other sciences related to the mathematics have heard of this prodigy.

University students from North Macedonia and from abroad had been seeking his help. Ylli Morina provides tutoring for some of them at his home, like the economics student Bunjamin Bahtijari. In a statement for Meta.mk, Bahtijari said:

“I study here with Yilli. It’s a little odd, because Yilli is a kid, but he knows a lot of math and knows how to explain the exercises very well. He explains the exercises and the problems that my professor can’t explain to me well, better than her.”

He believes that his young professor has a bright future.

“He is very talented. Probably one day he will become like Elon Musk, since he is equally talented,” said Bahtijari.

Living in Shuto Orizari, one of the poorest municipalities in the country, has been disadvantageous for Ylli. As primary schools rely directly on financing from local governments, the lack of resources and/or the lack of prioritization by decision makers leads to low basic support for them.

Because his primary school lacks  adequate classes and textbooks that will suit his needs and talent, Ylli has broadened his knowledge on the internet, listening to professors from abroad.

His mother, Imrane Morina, wishing to better assist him, opted for a career change and has even given up her medical studies. She says that Ylli could read and write from a very early age. When he was just four he fell in love with mathematics and, since then, he hasn’t stopped solving mathematical problems. He then began sharing his knowledge publicly and has started recording educational videos by himself.

“When I was 9, I started a channel for math exercises and problems. In the beginning, I posted videos about solving some easier problems and exercises. But when I was solving the problems, I wasn’t always sure, so I consulted a professor from Kosovo, professor Skender Kastrati. Then, while I was still consulting him, I began to upload the math problems that I solved on Youtube. But I was also watching other professors from India, Pakistan, America, Kosovo, wherever from I could. The problems they were giving I solved and posted them on Youtube. This is how I learned. Then I began working with professor Musa Zuka and I also started participating in contests.”

Most of the  videos on his YouTube channel are in his native Albanian, but he has also produced some in other languages, including English.

So far, Ylli Morina had won first place at several municipal, state, and regional math or science contests. But he is also proud of the successes of the university students he is tutoring.

“The students contact me whenever they need me, which is two or three times a week. And they are successful. For example, two students that I was preparing for math exams managed to pass them. One of them is from Kosovo, and the other from Africa, whom I was helping with Limits,” Ylli said, adding that he has written two books with problems that are still not published.

His story has been showcased by а documentary film, and the youth online video show Shortcut, produced in Macedonian and Albanian, all aimed at increasing public awareness and inciting accountability and solutions by the competent authorities.

Ylli Morina hopes he will be able to continue his education at a math gymnasium instead of groping in the dark for another year studying the materials from primary education that he already knows. (Editor's note: In North Macedonia the  primary school consists of 9 years, with the 9th year being equivalent of eight grade according to the  old classical system.)

His primary school homeroom teacher, Meral Riza, has only praise for Ylli. However, she said that, unfortunately, the educational programs in North Macedonia aren’t adjusted to talented children and that often poses a problem both for those children and the parents.

Ylli’s mother shares this experience. She said that, as a parent, she often is faced with problems, due to the lack of adapted programs for talented children. “We cannot correctly direct the talents in this system, because the pupils are trying to be perfect only in regard of their marks, but not enough to develop their true talents,” Ylli’s mother said.

Morina is referring to the practice maintained by many public and private schools of giving high marks to the majority of students, because the high or “perfect” GPA overall is a precondition for them to be able to choose a high school or university of their choice. Teachers are vulnerable to various influences, from coercion and corruption by parents, to compassion, compelling them to grant higher marks to kids who underachieve.

The absence of unified testing and grading criteria creates situations in which different primary schools churn out formally “all A” students at very different levels of knowledge and skills, both at the individual and school level. The bureaucratization of the system emphasizes the formal criteria rather than tailoring the education experience to the needs and talents of individual child. In the past, attempts by populist regimes to impose “external testing” backfired, as the implementation put emphasis on formality and punishment, including sanctioning teachers and traumatizing the students, who rebelled in protests. The government canceled the scheme in 2017.

Similar to other Balkan and East European countries, North Macedonia has few natural and industrial resources, and the latest census data revealed rapid aging of its population. The country's potential for economic recovery is hindered by brain drain. This includes families with children with genius potential — some parents chose to emigrate to Western Europe or the United States to give their wunderkind a better chance to fulfil their potential by enrolling them in educational systems that appreciate this kind of difference. For Ylli and others like him though, the internet has provided an alternative path for gaining and sharing knowledge, while staying in the country.

Ylli Morina: the 13 year-old mathematical genius from Skopje who is tutoring university students